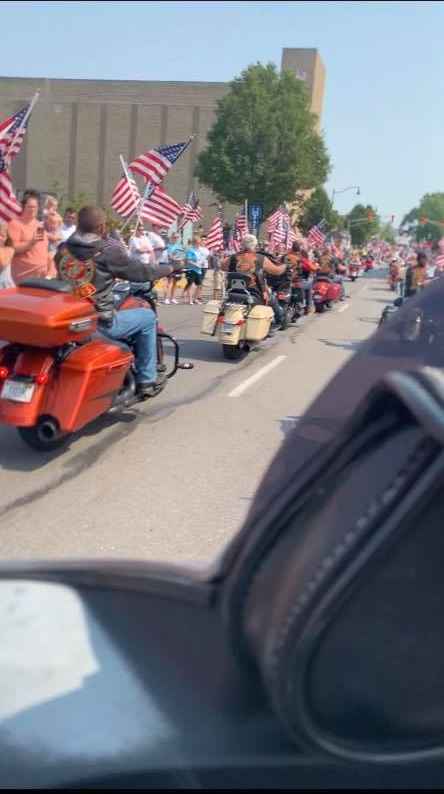 by Rogue and John Lee

What an honor it was to be part of the procession for Marine Cpl Humberto “Bert” Sanchez. Over. 8500 bikes came in from multiple other states to show their support. That alone was something amazing to see. There were so many bikes that there was no good way to even get a photo to show the amount of bikes that were there.

The Marine Riders were towards the front of the procession and when we pulled out to follow the behind Cpl Sanchez there were people lining the streets. From the gates of Grissom Airforce base all the way to Logansport. A good 20 miles of people on the side of the road.

Everyone had American Flags waving. Lots of Marine Corps flags too. Multiple ladder trucks with flags draped over the road. Old men in their uniforms from when they served saluting the entire procession. Children holding their parents hands. Family pets. People crying and holding their hands over their hearts. People playing Patriotic music.

And that’s before we even got to Logansport.

Cpl Sanchez received an aerial escort from 4 A10 Warthogs as we neared. They flew over us multiple times before circling the front end of the procession. They would come buzzing in a couple hundred feet off the ground.

Then as we come into Logansport it’s just a sea of people lining the street. Tens of Thousands of people lined the city streets for Cpl Sanchez’s final few miles. I would guess anywhere from 10,000-20,000 people were lined up along the roads from Peru to Logansport.

Absolutely amazing. Well done Indiana! That’s was an amazing homecoming for a hero.

I am honored to have been a part of this and happy I got to ride next to my Marine Rider Brothers. Please keep the Sanchez family in your thoughts and prayers as they prepare to bury their hero in a couple of days. 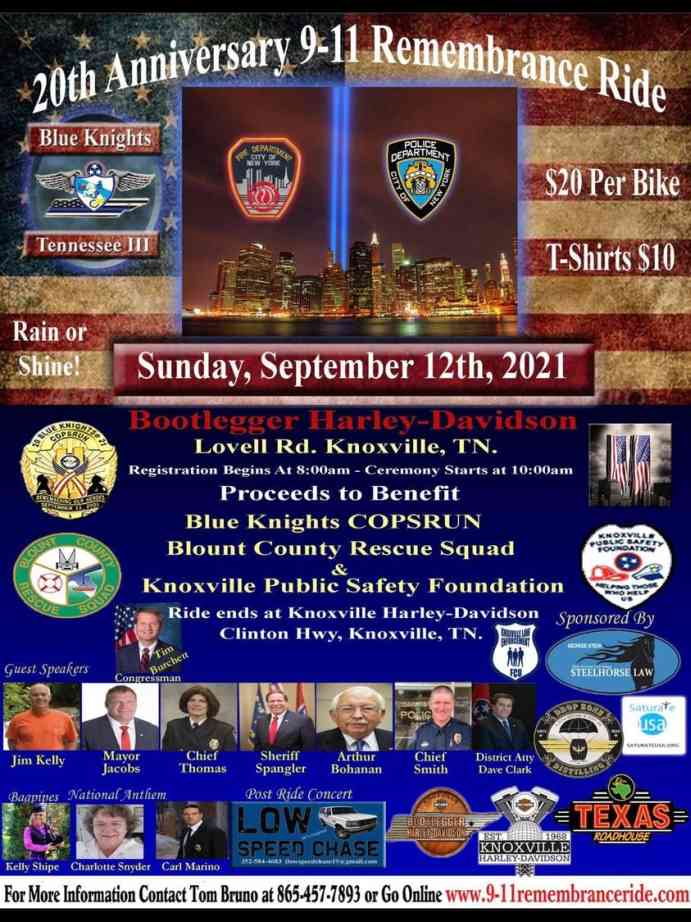 by Mary Klingler from https://www.wbir.com

KNOXVILLE, Tenn — A group of bikers will head to the streets Sunday to remember and honor the victims of the Sept. 11 terrorist attacks.

The “Blue Knights III” is a part of an international motorcycle club comprised of active and retired police officers. The Knoxville chapter of riders is holding a remembrance ride on Sunday at Bootlegger’s Harley Davidson, in West Knoxville.

Nearly 3,000 people died in the terrorist attacks, and 400 were emergency workers. In the motorcycle club, 8 members were New York Police Department officers at the time and more of these riders rushed in to help.

Robert McCaffery is a member of the Blue Knights III. For 20 years, he has carried a terrifying memory.

“It was just a horrendous scene. There was smoke and there was fire. It smelled,” he said.

A former captain for the Morris County Sheriff’s Office in New Jersey, Mccaffery like many other first responders volunteered to help search for victims after the attack on the World Trade Center.

“There was grey dust everywhere. There were people everywhere. It was all quite disorganized. There was nobody in charge. Nobody in command. You just kind of pick up your spot on the pile and you started picking things up and handing it back,” Mccaffery said.

He said that he met up with an NYPD officer in Staten Island before taking a ferry into the city, where much of the devastation was. He said that stepping off the ferry was like stepping onto a movie set, with grey dust and destruction all around.

After the attacks, he said nothing else mattered. Like many of his fellow officers, he just wanted to help.

“It’s the greatest city in the world and I just felt I had to do something and going in to help was the best thing I could do,” he said. “We have guys over there day after day breaking their backs to save people, and then later to recover as much of a body as possible so the family could have as much of a closure as possible.”

To this day, some of the motorcycle club members can’t talk about what they witnessed. But some said that the events of Sept. 11 bonded them forever.

Anyone can join the remembrance ride on Sunday with the group. The Knox County Sheriff’s Office will escort riders starting at the Bootlegger Harley Davidson in West Knoxville at 10 a.m.

Thanks to All Service Personnel: 9/11 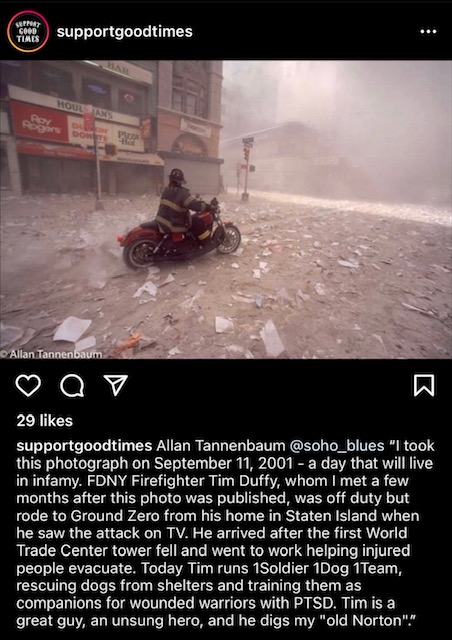 Thanks to All Service Personnel

I would like to take a moment and thank all service guys and girls including Fire Fighters, Police, medical folks and our military crew. They do a magnificent job every day under extreme circumstances especially now and on the days surrounding 9/11.

They live to a higher code, so brothers and sisters all over the country can ride free and safe. If you see a cop, a nurse, a fire fighter or a bro or broette in uniform today, say Thanks. 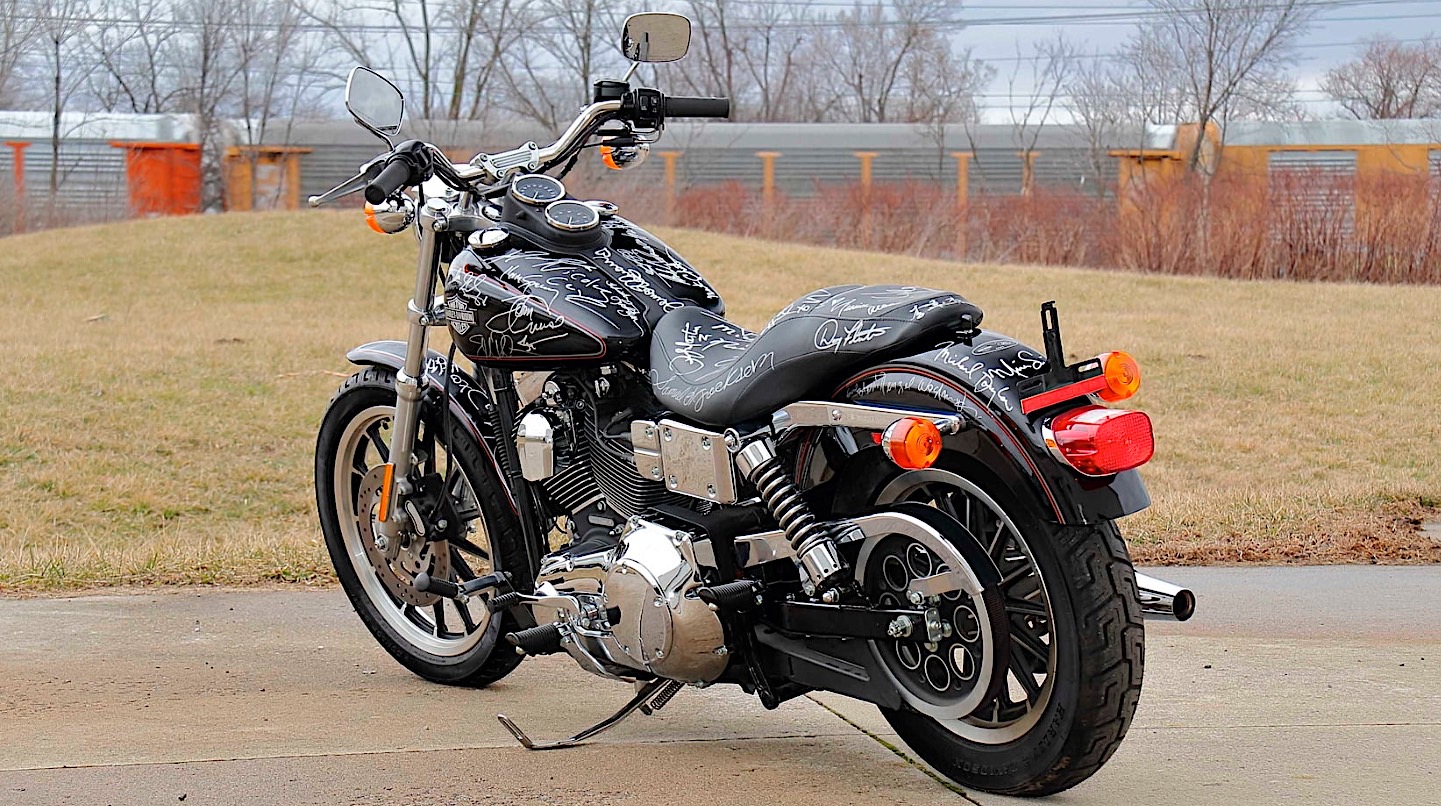