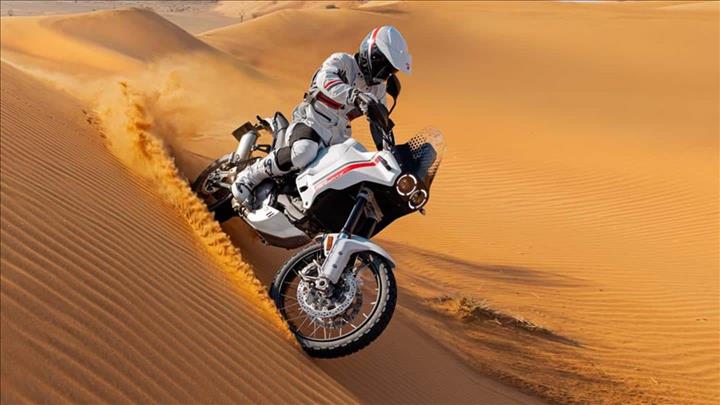 Ducati has officially revealed the DesertX adventure motorcycle in the global market.

It gets a new off-road-friendly chassis and a host of electronic riding aids.

The bike has a retro look, dual fuel tanks for fulfilling additional fuel needs, a 5.0-inch TFT screen, and a 937cc engine that comes paired with a 6-speed gearbox.

Takeaways
The Ducati DesertX concept was showcased at EICMA 2019 and two years later, we have the production model. It has a similar appearance as the concept version and looks like the Ducati motorbikes of Dankar racing from 1990s.

Distinct features such as dual fuel tanks and dual-pod headlight make it a unique offering.

Design
The bike has a generous ground clearance of 250mm.

The front and rear fuel tanks on Ducati DesertX have capacity of 21 liters and 8 liters, respectively.

Ducati DesertX features a muscular front fuel tank, a transparent windshield, a twin-pod LED headlamp, a split-style seat, an upswept exhaust, and an auxiliary fuel tank at the back.

It houses a 5.0-inch TFT display and rides on 21-inch front and 18-inch rear wheels.

Engine & Specs
The Ducati DesertX is powered by a 937cc, Testastretta twin-cylinder motor that churns out 108hp of power at 9,250rpm and 92Nm of peak torque at 6,500rpm. Transmission duties are handled by a 6-speed gearbox.

For the rider’s safety, Ducati DesertX is equipped with disc brakes on both the front and rear wheels, along with cornering ABS, wheelie control, traction control, and engine brake control. It offers six riding modes.

Pricing and availability
Ducati DesertX will start at $16,795 in the US. It will likely be available in North America starting June 2022.