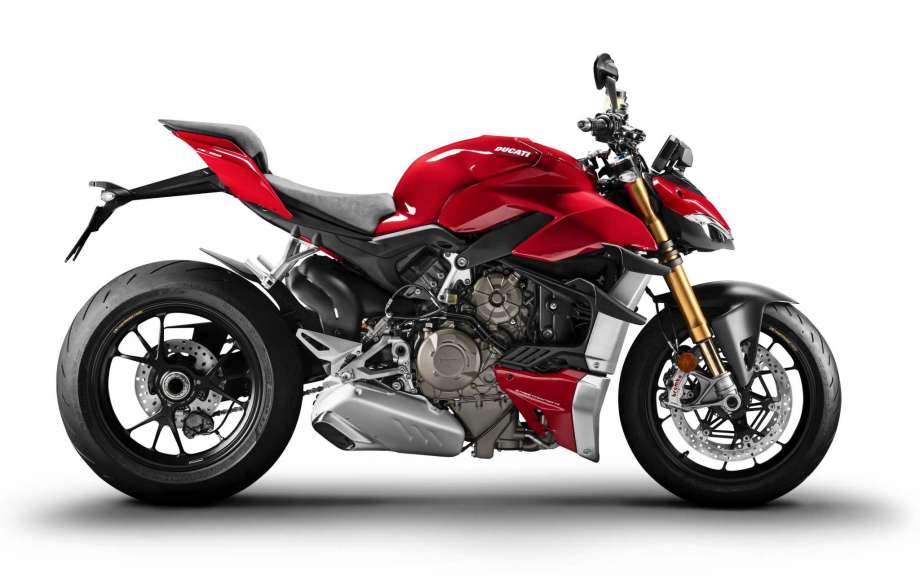 by Jeff Yip from https://www.sfgate.com

Ducati is doubling down on two-wheel performance.

For 2020, the maker of premium Italian motorcycles addresses the sportbike’s “naked” niche — where the manufacturer offers a top-of-the-line motorcycle without the fairings and windscreens — with its new Streetfighter V4 and Streetfighter V4 S.

The Streetfighter V4 is informed by Ducati’s sexy Panigale V4 superbike but the factory strips out the Panigale’s fairings and slaps on high, wide handlebars for street and highway duty. The bikes share nearly identical 90-degree V4 engines, with the 2020 Streetfighter’s producing 208 horsepower at 12,750 rpm, just six horses shy of the Panigale’s maximum output, which is attained at an even loftier 13,000 rpm.

With such mad power-to-weight ratios, Ducati knows many Streetfighter riders will hit the track and the bikes are designed to deliver. Form following function is at work — Formula 1-inspired vents behind the Streetfighter V4’s radiator help to extract hot air — and Ducati’s racing specialists incorporated “biplane” wings that flank the radiator’s side panels. They help generate 44 pounds of downforce on the front wheel at 168 mph.

“It takes a lot of commitment to ride a superbike. Its best use is the racetrack. The Streetfighter V4 is the motorcycle that allows that emotional connection and power, but it’s better on the street,” said Jason Chinnock, Ducati North America’s CEO.

Sportbike riders want something more comfortable and safer on the highway and to ride around town. “The ergonomics are different. You sit more upright,” Chinnock said. “The Streetfighter is tuned for more torque than the superbike version in third gear. On open back-country roads, you don’t want the revs all the way up; you want the torque to pull you through.”

Chinnock asserts that Ducati is more than its products. “It’s a brand. It’s entertainment. It’s a sense of community,” he said, noting that Houston is home to one of Ducati’s most active fan bases. Ducati’s North American chief said he loves visiting Houston and meeting owners at get-togethers like Ducati’s recent “Ready 4 Red” product tour in which the Streetfighter V4 was among the machines showcased.

The Houston event “is always one of the most welcoming,” Chinnock said. “It’s almost a homecoming. It’s a chance for the entire motorcycle community to get together and learn about technologies and connect with other people who are like-minded.”