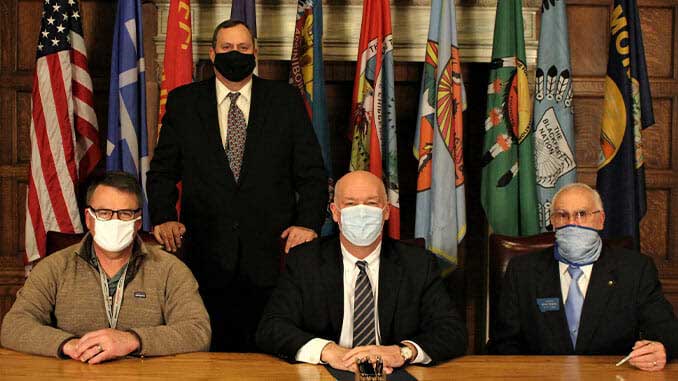 This is a press release from American Motorcyclist Association.

Montana has become the third state to recognize lane filtering, with the Gov. Greg Gianforte’s signature on a bill legalizing filtering of motorcycles under certain conditions.

“We applaud the efforts of Montana’s motorcycling community and the state’s legislators, and thank Gov. Gianforte for signing this legislation into law,” said Russ Ehnes, chair of the AMA Board of Directors.

S.B. 9 allows the operator of a two-wheeled motorcycle to overtake stopped or slow-moving vehicles at a speed not in excess of 20 mph, to filter between lanes of stopped traffic traveling in the same direction as conditions permit, and specifies reasonable and prudent motorcycle operation while lane filtering.

“With the signing of S.B. 9, Montanans have recognized the benefits of lane splitting, which allows motorcyclists the choice to filter in traffic when it is safe to do so,” said Tiffany Cipoletti, on-highway government relations manager for the American Motorcyclist Association.

The bill, sponsored by state Sen. Russ Tempel (R-SD14) and state Rep. Barry Usher (R-HD40), was signed by Gov. Gianforte on March 2 at a public signing ceremony in Helena. Ehnes was in attendance. The bill takes effect October 1, 2021.

California (A.B. 51, 2016) and Utah (H.B. 149, 2018) were the first two states to codify and sign lane-splitting or lane-filtering legislation. Efforts to legalize and formally recognize lane filtering/splitting is under consideration in three other states during the 2021 legislative session.

The AMA endorses lane splitting, given the long-term success in California and the University of California-Berkeley research study showing that the practice enhances motorcycle safety. The AMA will assist groups and individuals working to bring legal lane splitting and/or filtering to their state.

“As lane splitting support continues to gain traction across the country, I am eager to help more motorcyclists engage their state legislatures on this issue,” Cipoletti said.

The full AMA position statement on lane splitting can be found at americanmotorcyclist.com/lane-splitting/.