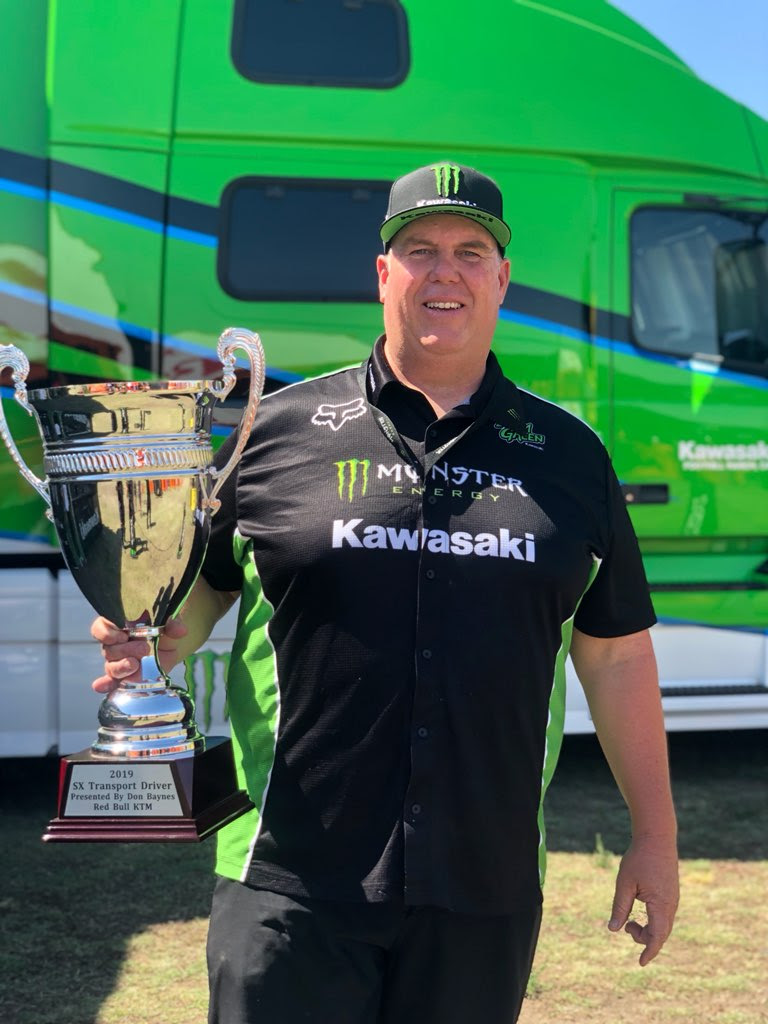 Foothill Ranch, Calif. (May 5, 2019) – Round 17 of Monster Energy® AMA Supercross, an FIM World Championship returned to Las Vegas, Nevada for the season finale where Monster Energy® Kawasaki rider Eli Tomac finished the season on high note with a dominant overall win and once again showed that he is the best in the Las Vegas conditions.

As the temperatures in the desert rose so did Tomac’s race pace as he rode blistering fast all day long and set the fastest time in qualifying aboard his KX™450. In Heat Race 2, Tomac had a fourth place start with his title contender ahead of him. Tomac quickly made his way into second and began to setting up a pass for the lead when he mistimed a rhythm section causing him to come to a complete stop on the track. Only losing one position, there would be no denying him from getting to the front of the pack, where he went on to win the heat race.

In the Main Event, Tomac turned up the heat even further, rocketing to the holeshot and never looked back, going on to win the main event by 12.061 seconds ahead of the competition. Tomac finished the season second overall in the 450SX Championship Points Standings and will now begin to turn his attention to defending his 450 Motocross Championship, looking to mark his place in the records books with a third consecutive title.

It was a tough day at the office for the No. 17 machine of Joey Savatgy as his night was cut short due to a crash in practice. Savatgy finishes out the season in eighth place overall and the highest scoring rookie in the championship points standings.

Savatgy took home honors on Saturday night as he was named the 2019 Rookie of the Year.

Monster Energy® Kawasaki’s race semi-truck driver, Brian “Big B” Barnhart was awarded the 2019 SX Transport Driver of the year award. Although an unofficial award, the award is nominated and agreed upon by fellow factory team’s semi-truck drivers and team managers in the paddock to acknowledge the hard work throughout the season.

“Man, what a season that was! Tonight we just gave it the beans and held it wide open all night long. Nights like tonight were just downright fun racing my motorcycle. I am proud of myself and the effort the whole Monster Energy Kawasaki crew put in all season long. We’ve got my 2019 KX450 dialed in right now, which has me excited to get outdoors started. I am already looking forward to the 2020 supercross season, but in the meantime, I plan to carry this momentum into outdoors and once again defend my title.”
– Eli Tomac

“Honestly, I am pretty darn proud of what the Monster Energy Kawasaki team and I accomplished in my rookie 450SX season. Today was one of those days where I made a minor mistake that caused me to have a pretty hard crash. Luckily it wasn’t anything too bad, but I am bummed I couldn’t give it a go for the last round here in Vegas. I think we showed a lot of consistency all season long, as well as showing that we belong up front and in the hunt. We accomplished a lot of the goals I set out for myself at the beginning of this season. To be named Rookie of the Year in the 450SX class is a huge honor and I could not have done it without my whole Monster Energy Kawasaki team. I am going to take the next two weeks to heal up and get ready for outdoors and once again show everyone what I am capable of.”
– Joey Savatgy

Monster Energy/Pro Circuit/Kawasaki rider Adam Cianciarulo came into the final race of the season poised and ready to wrap up the season with a championship with the additional challenges of the combined East/West Showdown format. Cianciarulo set the tone early as he qualified with the fastest lap time in the 250SX Western Region with teammate Garrett Marchbanks in seventh.

The Western Region riders lined up for their heat race first as Cianciarulo shot out of the gate in a top-5 position, while Marchbanks was forced to charge from 11th. The teammates went to work aboard their KX™250 machines as Cianciarulo made his way to third before running out of time in the short, 8-lap heat race. Marchbanks was able to make a few passes of his own, finishing seventh.

The East/West Showdown Main Event marked Martin Davalos’ 101st and final 250SX race in the class. Davalos kicked off the day qualifying third in the 250SX Eastern Region and carried on the momentum into his heat race as he finished second.

As the gate dropped on the East/West Showdown, Cianciarulo positioned himself in fifth and started his push toward the front of the pack, while Davalos and Marchbanks were wedged outside the top-10, sitting 11th and 16th, respectively. Just as they approached the halfway point of the race Cianciarulo had made his way all the way up to third before making a costly mistake in a rhythm section, causing him to crash. Due to the severity of the crash, Cianciarulo was unable to ride at race pace and was forced to slowly roll through the rest of the race to finish 20th, finishing second overall in the 250SX Western Region Rider Point Standings. Davalos and Marchbanks rode consistently throughout the race to finish ninth and 10th, respectively.

Young gun Marchbanks wrapped up the season with a top-10 overall finish and was awarded Rookie of the Year in the 250SX Western Region, which gives the Kawasaki Team Green alumni some added confidence to come back as a strong contender for 2020. Davalos secured fourth overall in the 250SX Eastern Region Rider Point Standings, just a few points behind his injured teammate Austin Forkner, who managed to still clinch third overall without being able to compete in the last three main events.