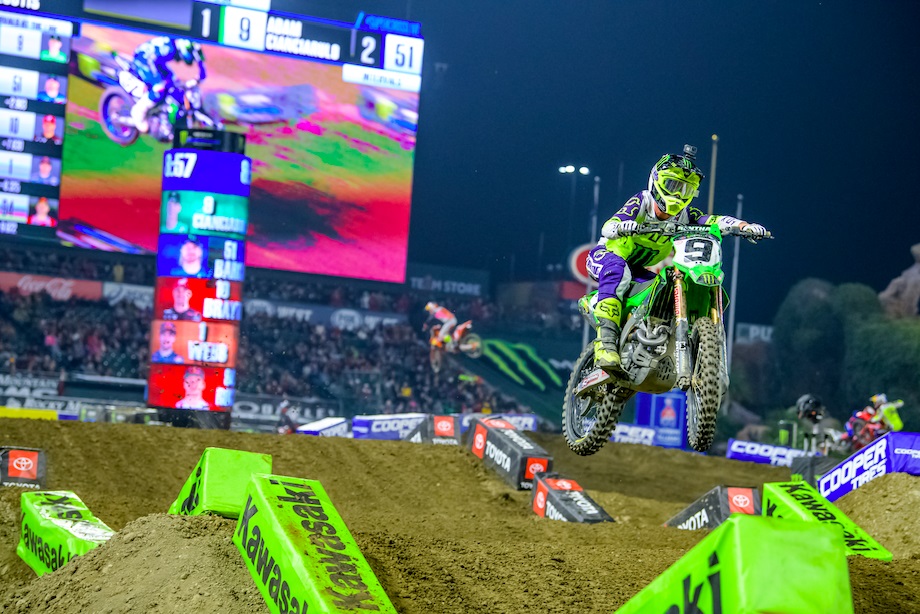 Foothill Ranch, Calif. (January 5, 2020) – Monster Energy® Kawasaki came into the 2020 Monster Energy AMA Supercross, an FIM World Championship season opener in Anaheim, California feeling stronger than ever with the dynamic rider duo of Eli Tomac and Adam Cianciarulo. Cianciarulo making his Monster Energy Supercross 450SX debut picked up right where he left off at the Monster Energy Cup, showing great speed aboard his KX™450 all day long. The rookie was able to capture the fastest qualifying, a second place finish and a spot on the podium.

While a true rookie in the 450SX class, Cianciarulo made the rest of the competition aware that he was a true player in this title chase. Cianciarulo started the day off perfect by setting the fastest times in all three practice sessions and finished second in his heat race. In the Main Event, Cianciarulo made quick moves to put his KX450 into second place and began to hunt down the leader. After a mistake from the leader, Cianciarulo was able to capitalize and begin building a lead over the field, however, a minor mistake cost Cianciarulo the win in his debut race, he continued to push, finishing in second place.

It is no secret that the No. 3 machine of Eli Tomac is a title contender and podium contender every time he lines up to race his KX450. Tomac showed this early in the day, qualifying in second place position heading into the night show. However, in both the heat race and main event a mid-pack start would ultimately hamper his results. Tomac finished the evening in seventh place overall.

After months of build-up to the Monster Energy Supercross opener at Angel Stadium, neither the racing nor the fans were disappointed. 45,050 fans packed the stadium to watch the greatest racers in the world compete on the biggest stage in supercross.

“I fell in love with Supercross watching Anaheim 1back in 1999. Ever since then I’ve been dreaming about what I got to experience tonight. Everything from opening ceremonies to getting my first 450 podium. I was bummed we couldn’t capture the win, but regardless I am stoked on this result. It is a long season, I still have a lot to learn and build on from here, but I am already fired up to go racing next weekend in St. Louis.”
– Adam Cianciarulo

“Man, the first race of the season is always an interesting one. The whole day is just chaotic. I started feeling a bit of a flow by the end of the last qualifying session today, but in both the heat race and main event tonight I got decent starts but got shuffled back in the first turn and the way the track broke down tonight it became very one-lined and difficult to make passes. The competition this year is deeper than ever, so we will regroup this week and come out swinging in St. Louis next weekend.”
– Eli Tomac 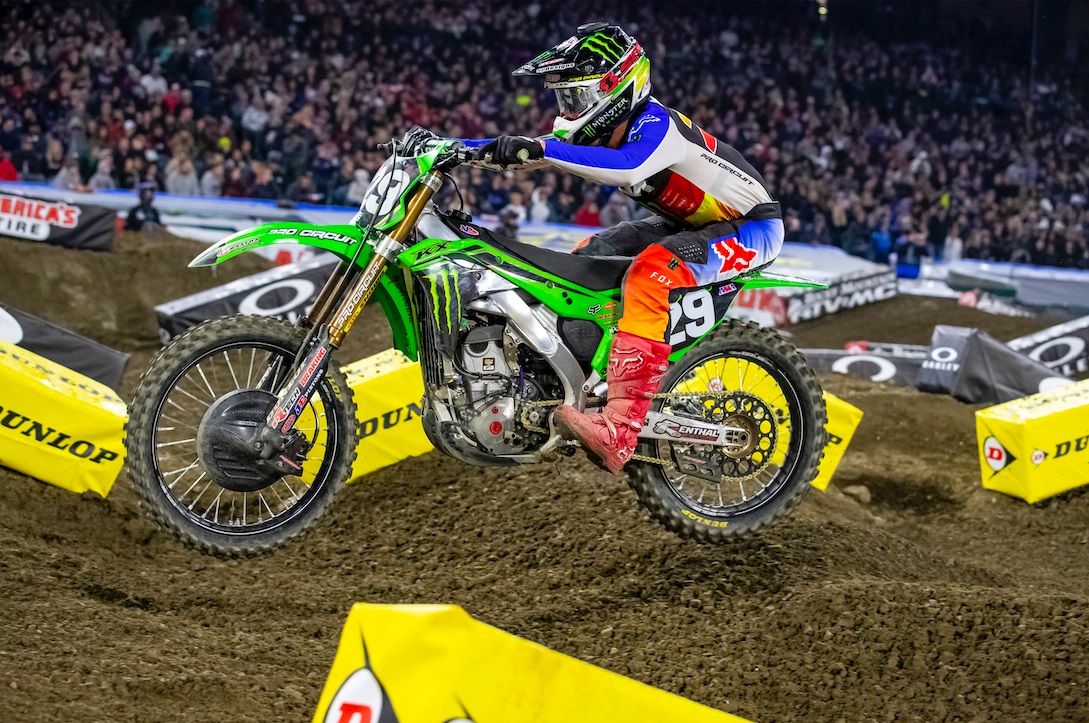 The Monster Energy/Pro Circuit/Kawasaki team of Austin Forkner and Cameron McAdoo came out charging at the season opener of the 2020 supercross series. Both having something to prove, Forkner was prepared to return to racing and his winning ways after his season was cut short by an injury last year, while McAdoo was ready for his Kawasaki debut aboard his KX™250 motorcycle.

After qualifying sixth on the day, Forkner charged through the field in the first heat race of the night moving into second position. Following an aggressive pass from one of his contenders, Forkner fell back to fourth but quickly made up time and made his own pass into third where he would finish.

The No. 29 of McAdoo kicked off the day qualifying with the fifth fastest lap time before entering his heat race. In 250SX Heat 2, McAdoo quickly made his way into third, where he went on to cross the finish line.

As the gate dropped on the 250SX Main Event, it was Forkner who grabbed the first holeshot of the season, while teammate McAdoo found himself mid-pack and having his work cut out for him. Forkner continued to charge, leading 11 laps before making a mistake through a rhythm lane causing him to collide head-on into a Tuff Block. The Missouri native finished third on track, but the officials penalized him two positions for how he reentered the track. McAdoo was able to pass three other contenders before reaching the checkered flag in sixth.