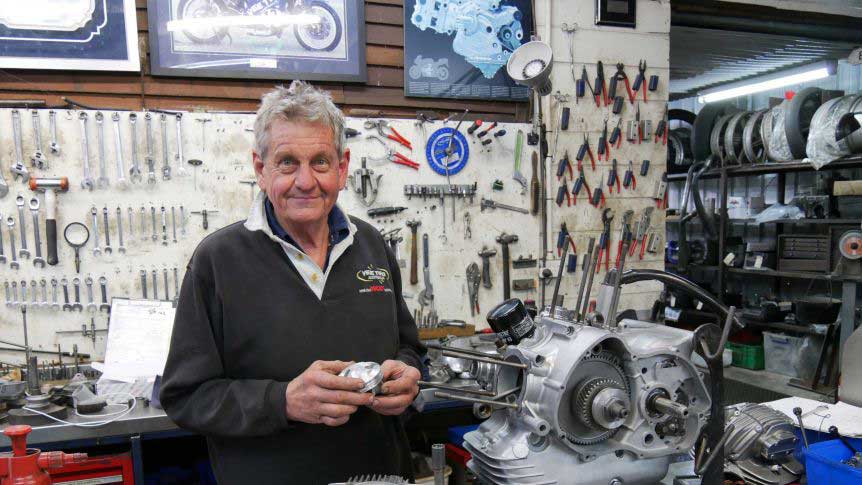 by Ellie Honeybone from https://www.abc.net.au

You may be forgiven for assuming the world’s leading manufacturer of Ducati bevel drive engine parts would live in a bustling city, perhaps in Italy or the United States, somewhere central and close to consumers.

But in fact, this talented engineer and self-described “petrol head” lives in a tiny historic town, deep in the forests of south-west WA.

Even though shipping his handmade engine parts around the world from Nannup is a logistical nightmare, Brook Henry wouldn’t have it any other way.

His older brothers imported and distributed the high-performance motorcycle brand in New Zealand from the late 1960s through to the 1980s.

“I spent pretty well all my time at the workshop, fixing, racing and working on Ducati bevel drive twins and singles,” Mr Henry said.

“I also did an apprenticeship outside that business as a toolmaker, but I never liked doing toolmaking and I always wanted to go back to motorcycles.”

That love of motorcycles grew and continued for the next 40 years with Mr Henry now a household name and ‘master’ in the Ducati world.

He has travelled extensively, inspected designs inside Ducati’s Bologna factory and even appeared on bike lover Jay Leno’s US television show.

After settling down first in Perth and then further south in Nannup, Mr Henry developed a business building, designing and shipping bevel drive parts, engines and complete motorcycles across the world.

There are only so many original bevel drive Ducatis in existence, making Brook Henry’s business incredibly niche.

These bikes were built during the 1970s and 80s and made famous after legendary British champion Mike Hailwood won the Isle of Man race in 1978.

When the world went into COVID-19 lockdown during early 2020, many owners of bevel drive bikes decided it was the right time to blow off the cobwebs and reignite their restoration projects.

“I’ve never been so busy because guys who bought bevel drives put them in the back of a shed and chucked a rag over them,” Mr Henry said.

“The wives got sick of their husbands being in the kitchen and told them to go out and find something to do in the shed.

“So they went out and pulled the cover off the old Ducati bevel drive and started looking around to where they could get the parts to start putting it back together.

“Our customer base worldwide has been huge with COVID because anyone who’s got a bevel drive has gone and started working on it.”

In addition to supplying global customers with all the parts they need for their pandemic restorations, Mr Henry has another project in the works.

Through what he calls a “crazy set of circumstances”, he purchased the drawings for the original engine used in the late Mike Hailwood’s Isle of Man race winning bike, of which only a handful were ever made.

“We’ve actually been talked into making 12 exact replicas of Hailwood’s bike,” he said.

“We decided that we would make a limited run of them and the number we decided on was 12, because that was his racing number.”

While there will only be a dozen of these Hailwood recreations made, the engine — dubbed the ‘Ritorno’ — is available on its own with the approval of the Ducati factory.

“The business is expanding at 100 miles an hour because people worldwide want that engine and want parts for it,” Mr Henry said.

“So we’re gathering speed at a frightening rate at the moment, but I’m so passionate about it and I love what I do.”

Mr Henry has big plans for expansion after receiving a $113,000 Regional Economic Development grant from the WA Government.

The investment will be used to employ more staff and purchase state of the art manufacturing equipment to build Mr Henry’s own version of the iconic bevel drive engine.

“I like to keep the outside of the engine looking the same where I can,” he said.

“And now I’ve got the opportunity to basically build my own internals and to improve on the existing engine.”

Despite being extremely busy these days, Mr Henry still enjoys the occasional ride through the scenic forest roads near his home.

“The only thing is, you do not have any control over emus and wildlife, kangaroos running out of the bush, all that sort of thing.