Lowes fights back to third at the Spanish Grand Prix 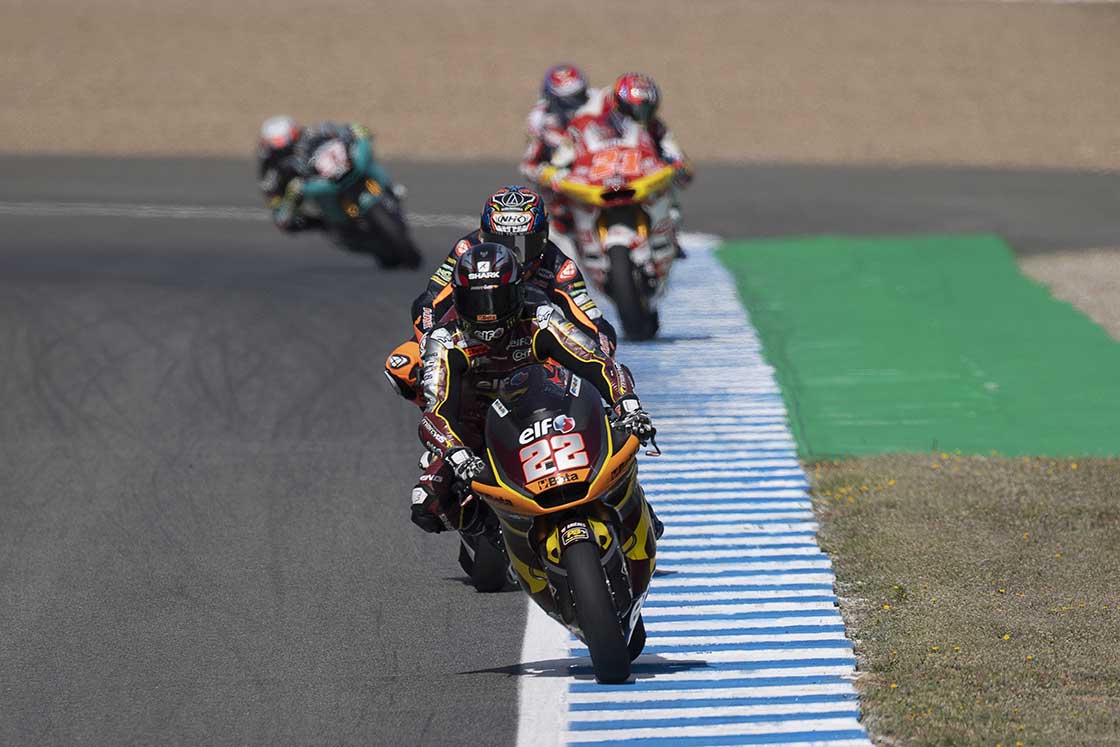 After a tough start, Sam Lowes saved his best for last to claim his third podium finish from the opening four races of 2021, while Augusto Fernandez suffered an unfortunate early crash from third.

The Moto2 field had to navigate 23 laps of the Circuit of Jerez Angel Nieto in ambient temperatures of 21 degrees for the fourth round of 2021.

There were mixed fortunes for the Elf Marc VDS Racing Team riders in an outing that broke the previous Moto2 race record. Sam Lowes scored 16 important points for his world championship challenge, while Augusto Fernandez failed to finish.

Augusto Fernandez – DNF
The 23-year old enjoyed a brilliant start from seventh on the grid, and climbed four places in the first half a lap to sit a very strong third.

But Augusto’s race came to a frustrating end when he tucked the front at turn six on the third lap, a result that brings his first non-score of the 2021 season.

It means the rider from the Balearic Islands slips to ninth in the championship with 23 points.

“The positive thing is we have the speed again”

“A big shame! I made a great start. I was there and in the lead group. My pace was podium pace and I felt good. I did a 1’41.7s with a full tank on the second lap. I was third and thought it was time to relax so I could be strong at the end of the race. But I made a little mistake, coming into turn six hot with the brakes. With the full tank, the front closed immediately. I couldn’t do anything. The positive thing is we have the speed again. Also, we are constant in every practice at different tracks – the second weekend in Qatar, Portimao and here. I struggled a lot last year and now we’ve been competitive. We just have to manage the races better and know how to be at the front. I want to say sorry to the team. It was completely my mistake and now I’m already thinking about Le Mans.”

The Briton didn’t enjoy an ideal getaway off the line, dropping from fifth to eighth by the first corner. Despite joining the back of a four-rider fight for second, Lowes didn’t feel comfortable in the race’s first half.

But the 30-year old maintained his cool and produced a late rally. He passed Remy Gardner for fourth on lap 20 and then took third from Raul Fernandez at turn two on the penultimate lap.

The result sees Lowes climb to second in the world championship with 66 points, and sits just 3 behind leader Remy Gardner.

“It’s really positive to be back on the podium”

“It was really important to get the race distance today after what happened in Portugal. We didn’t just miss out on scoring points, but we didn’t get any information for the race distance. Today I didn’t have the grip I expected in the race. But the conditions were like that. I was happy to have the speed at the end. It’s really positive to be back on the podium after Portugal. It has been another solid weekend. I want to thank the team for their help. Now we can look forward to Le Mans in a couple of weeks, where I have great memories. It’s where I scored my first win with this team!”