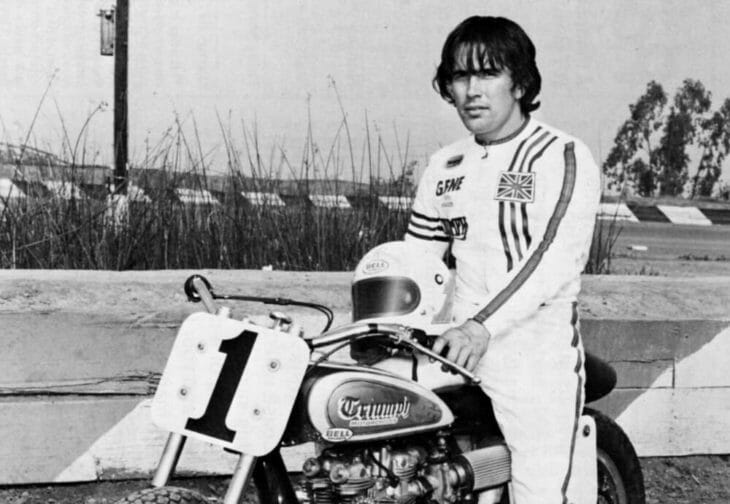 Born, Gene Ronald Romero, May 22, 1947 in Martinez California, Gene called San Louis Obispo home. He cut lawns and cleaned pools to get his first motorcycle. His father, Gene senior, was a tough and proud man who imparted the traits of hard work and honest living to Gene and his two younger brothers, Carlos and Terry. Their mother, Emma was a saint. She had the intolerable job of raising these three, rough and tumble boys, while keeping up with the demands from the patriarch of this respectable Romero family. Her German lineage added a meticulous, sensible and loving aspect to their upbringing. But just don’t get between any of the Romero brothers (or senior) because chances are you may find yourself on the loosing end of the stick.

Always the cool one, Gene had those Elvis Presley good looks. He had class, talent, determination and the best sponsors you could find. He was one of America’s greatest motorcycle racers. He changed the course of professional motorcycle racing when he brought non-motorcycle-oriented sponsors into the sport from outside the industry. When local sponsors like, Bill’s muffler shop or Joe’s Garage seemed to be the only available course, Gene pursued and landed national sponsors like Busch Beer, Ocean Pacific, Evel Knievel and factory Yamaha.

Romero honed his racing skills on dirt and scrambles tracks in the Central Valley of California. As an amateur, Romero used his scramble skills to become a top TT Steeplechase Rider. Not surprisingly Romero’s first pro finish came at the age of 19 at the Castle Rock TT in July 1966. He adopted the nickname “Burritto” with two Ts instead of the conventional spelling with one T. His first national win was two years later in Lincoln, Nebraska riding a Triumph.

Romero had won 12 AMA Nationals during his 16-year racing career and received AMA’s most popular “Racer Of The Year” Award.

His greatest moments may have come in 1970 when he became National Champion, of the AMA Grand National Championship Series and in 1975 when on a completely different style of motorcycle, he became the winner of American Road Racing’s most coveted prize, the king of them all, the Daytona 200. That would be the equivalent of winning the IndyCar Championship and the Indianapolis 500…. an analogy unintended as patronizing… in fact it is flattery. More than once you’d hear his Indy 500 racing car cronies say, “Gene, you motorcycle racers are crazy!”

Chris Agajanian recalls Gene always having a unique way of expressing himself and not soliciting sympathy from others, like when he had a six-month stint in a full body cast.

“He was a huge personality. An old school spirit and akin to his pal “The Intimidator”, the other #3. Don’t cross him or you’d wish you hadn’t. He did it his way ‘til the very end. He had those Elvis Presley good looks and some of the best witticisms around.

Lying there in a full body cast and asked how he was doing, he quipped, “It’s no problem, I’ve had worse things in my eye.”

Still, his best quote was memorialized in the greatest motorcycle movie of all time, the Academy Award nominated documentary “On Any Sunday”. At the time, Gene needed a third place or better finish at the Sacramento Mile in order to be crowned the 1970 AMA Grand National Champion. He remarked when interviewed; “I don’t want to hurt anybody – but I’ve got to get third no matter what… I’m going to get third or come see me in the hospital – I dig carnations.”

The Agajanian Family is shaken and saddened at the loss of our dear friend “Burritto”. You are forever in our hearts. Elvis has left the building and Gene has left the racetrack – with the checkered flag.…..Chris Agajanian

Just seven years after his amateur race at Ascot Park in Southern California he became the youngest AMA Grand National Championship titleholder in the sport’s history at age 22. Gene was so dominant that year that he sealed the championship by winning the Sacramento Mile with two races remaining on the schedule.

After 16 years of racing, Romero retired. Following his retirement, American Honda Motor Co decided to take on Harley Davidson at their own game. Harley had that scene pretty well sewed up with its aluminum XR-750, a bike that every year became more and more intimately adapted to dirt. Honda’s philosophy was; it takes people who understand racing, backed by R&D. For Honda, one such person was Gene Romero. He was hired to manage Honda’s dirt track program. From 1984 to 1987, Honda took home the No. 1 plate and became the series king, winning four championships in a row.

Gene raced cars briefly before becoming a promoter and creating the west coast flat track series, which over the years, has given novice and semi pro riders a place to race at more than 30 venues stretching from Southern California to the Pacific Northwest. He was inducted into the Trailblazers Hall of Fame and soon after, the AMA Motorcycle Hall of Fame in 1998. He died just 10 days short of his 72nd birthday and leaves behind his loving wife Cheri and 23-year-old son, Geno.

The family is besieged with prayers and good wishes. Cheri and Geno would like to thank you all for your wonderful thoughts and care. Please understand the sorrow and the despondency, a loss such as theirs, can have on all of the Romero Family. He was a real champion on and off the dirt. Please respect their privacy and peace. 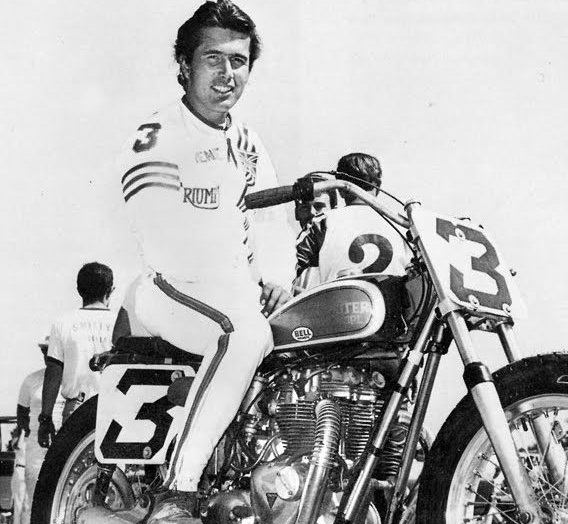 In lieu of a memorial service, many racetracks across the nation will be having a “Moment of Silence” in our hero’s name. There will be a celebration of life TBA. To commemorate the 50th Anniversary of Gene’s Championship run, a special event is being planned for the 2020 Sacramento Mile. “The Gene Romero Memorial Sacramento Mile” will feature a limited edition T-Shirt complete with the ROMERO name on the back over his stylized number 3. Also planned will be an Inaugural “Gene Romero Vintage Motorcycle Show” featuring the industry’s finest racing bikes, an official commemorative, pictorial program containing all of the champions that raced in the 1970 Sacramento Mile, the race that was featured in the movie “On Any Sunday”, a display of Gene’s personal, race-worn leathers, helmet and his beautiful Triumph motorcycle, an electronic green-screen photo booth where you and your family can have a picture taken with “Burritto”, a commemorative VIP photo-ticket that will be sold in advance, an autograph signing session for past and present riders on hand, a discounted VIP travel package and much more. Please stay tuned for updates. Chris Agajanian has just accepted the honor as Grand Marshal for the 2020 Sacramento Mile and would love to see you all join us for the Gene Romero Classic Motorcycle Spectacular. R.I.P. Gene Romero #3 “Burritto”