If Mad Max Needed One More Motorcycle for Filming, This Would Have Been It 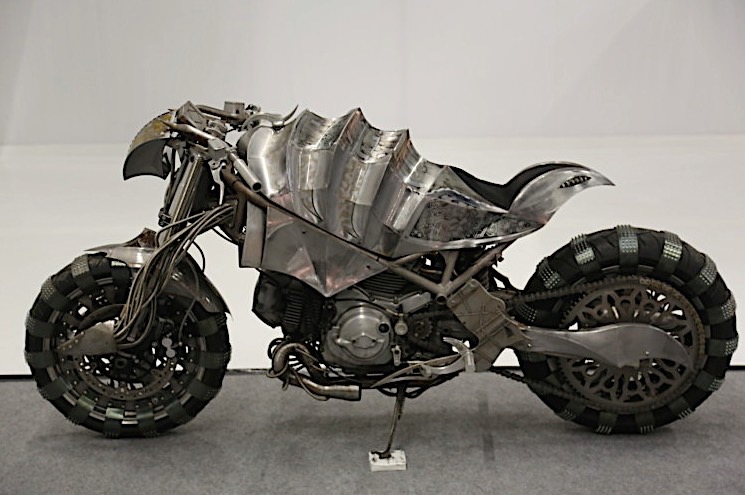 Italian people have designer genes in their blood, as a guy called Luca Lamperti clearly shows after making a full custom Mad Max and Alien vs Predator mash-up based on a Ducati Monster. He calls it the Apophis 99942.

Grezzo, by his nickname, runs a custom builds workshop called Raw Bike Factory and he is a full time artist and iron “worker” full of creativity. He likes to think that he is a shaper of unusual things and this bike is the result of his ideas.

At first glance, his creation makes our brains think only about Mad Max movies combined with Alien vs Predator. It’s the perfect bike for an alien to ride between the galaxies to kill the predators.

Everything on the bike, except the engine and the mainframe, is a custom build. Starting in the front we can see many little braided lines, albeit only one of them is a real brake hose. The tires have metal studded bands attached to them. This makes the machine unrideable on the street, so he has the perfect excuse to keep this beauty inside the house and admire it every day.

To achieve a more aggressive look, he changed the original 40-something tooth puny sprocket with a gigantic and humongous home-made sprocket. The tank, saddle and tail section are made from one big aluminum piece, hand-beaten into the desired shape. The symbols drawn on the different parts of the bike are applied via a special mechanical process that can engrave on aluminum.

One other thing that stands out for this bike is the fact that it has steel grips. It seems like Grezzo does not like rubber at all. In addition, he thought that keys are not cool either, so by typing a special code on the bike’s touchscreen placed instead of the original dashboard, you can start the engine.

The Apophis 99942 was created to participate at custom bike building championships. It participated at the AMD World Championship in 2018 in the freestyle class. Although this build is special and unique, it only got an honorable mention.