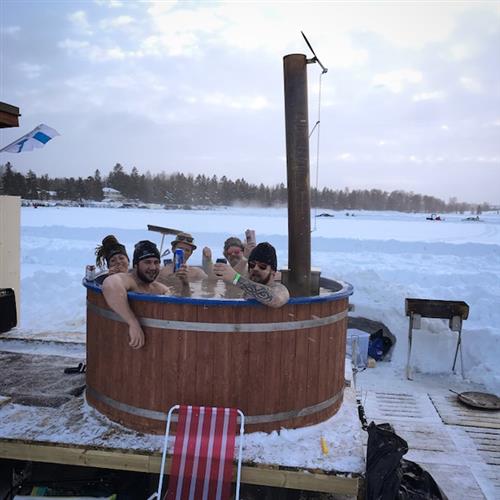 Landspeed record on a frozen lake was celebrated for the 10th time in SWEDEN 23-24 Feb ! The Viking alternative to race on salt at Bonneville Utah in USA.

The location is just two hours north of Stockholm, but Årsunda is a cold place where the lake freezes early in the winter. Speed was started by Glenn Madman Ocklund ten years ago. He and his friends wanted to see what their cars and bikes could do on the flying kilometer. Landspeed are now even sanctioned by the US summer racing guys.

There are two main courses, 1600 meters accelerate, 1000 meters for time cheque, and like 1500 meters to stop…! On top of that there is a drifting course just to have fun on icy curbs and a ice speedway course.

The variations of the vehicles is everything from rockets to choppers. British bikes are the thing right now, lots of Triumph 500CC and 650 CC. Classic Norton Dominator 850CC did 170 km/h. Crazy Pavel from Poland did 302 Km/h on his Haybusa!!! and his son 15 years old did 275 on a Suzuki……..

The most famous club on the ice is Bengalos from Swedens west-coast, they bring new bikes each year. 2018 a Jawa 500 CC ex-speedwaybike the two-speed with pilot Hasse Antonsson did 139km/H on the show painted bullet!

They inspinner a couple of Norwegians last autumn to rebuild their choppers to 60s look dragbikes. Per-Henrik Bernström managed to do 133km/h on a 500CC 1971 Triumph. First time ever ice racing.

He said that when you are done with acceleration everything is just to be in a white cloud. Front Fork wobble the rigid frame like a snake hold on to the handlebars, and when you see the flag brake slowly, it is an adrenaline rush, better then drugs.

The kompressor-king of Stockholm had a really fast Sportster. New sprockets new chain but, however after 2000 meters the chain broke and twisted around his leg. The ambulance came fast examined and put some bandaid on. He wanted to race again but the nurse said you have to X-ray! At the hospital they found a piece of the chain deep into his thigh… operation direct. But he will be back 2019!