Honda Motorcycle bought in 1981 with zero miles in original condition 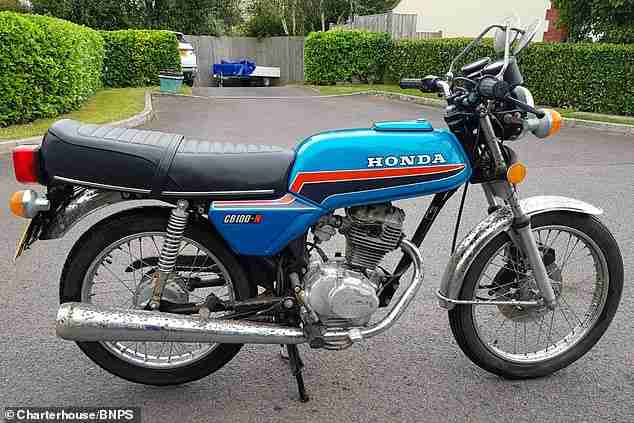 Honda motorbike bought in 1981 that has zero miles on the clock because it was confiscated by its teenage owner’s father and locked in garden shed goes up for auction for £2,000

by Katie Feehan from https://www.dailymail.co.uk

A 40-year-old Honda bike with no mileage on it has been rediscovered and is up for auction after the disapproving father of its first teen owner banned him from riding it and locked it away in storage for decades.

The 1981 Honda CB100N was bought brand new by the youngster in his youth while he lived with his parents.

However, his boyhood fantasy of riding a motorcycle never materialised because his strict father banned him from riding it.

Instead the machine was left to languish in storage for the next four decades.

After his father died the unnamed owner, who is now aged in his 50s, was tasked with clearing out his house in Bridgewater, Somerset, and stumbled upon his old but immaculate bike.

He agreed to sell the time-capsule Honda to neighbour Graham Tozer who has now put it up for sale at auction.

The bike still has its original tax certificate with an expiry date of July 31, 1982. The odometre displays the exact mileage of a mere four tenths of a mile.

Mr Tozer, 64, said: ‘I’m a collector of classic bikes and cars, so six months ago my neighbour called me up and said they needed rid of it.

‘He was born in the house and spent all of his life there. When he was a youngster he really wanted his own bike but when he brought it home his dad wouldn’t let him ride it.

‘He’d saved up for such a long time to buy it but his father just said, ‘you’re not going on that. You can stick it in the shed’.

‘Apparently his dad was really strict. He was ex-military and he was the boss of the house.

‘I would have loved a bike like that when I was younger but my dad probably would have done the same thing.

‘To have a motorbike from the eighties which hasn’t been touched is so unique. It really is like the Holy Grail for collectors.’

George Beale, a specialist at Charterhouse Auctioneers of Sherborne, Dorset, said: ‘These bikes were ordinarily used for commuting, so those which are still on the market from the 1980s tend not to be in the greatest condition.

‘But with a little work this one could be like brand new, which is incredibly unusual for something so old.

‘It would be rare to find any vehicle from the 1980s without any miles whatsoever. It just so happens that this young boy’s tyrant father was far more forceful than he was.’

The Honda is being sold with a pre-sale estimate of £2,000 at the Haynes International Motor Museum on October 14.