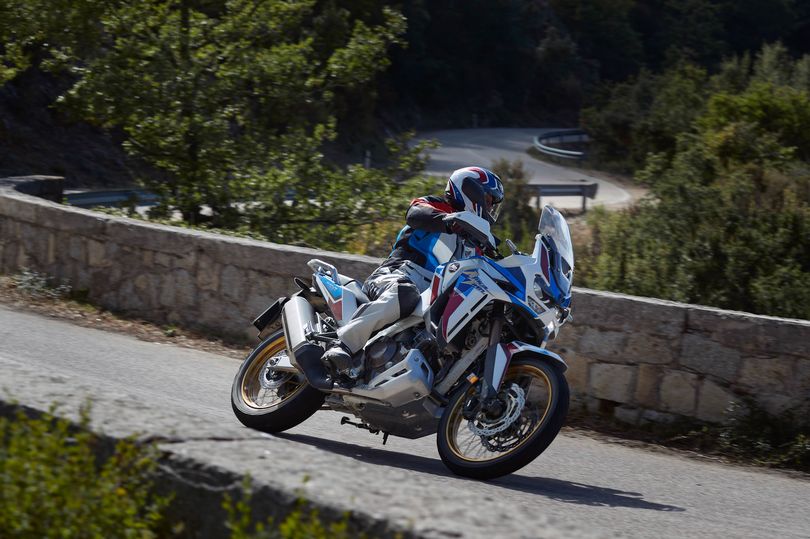 It may have more gizmos than the Space Shuttle, but once Geoff had figured out how to make them work using his incredible bloke superpowers, it turned out to be simply a very good motorcycle

Here is an urgent message for Honda. In the cupboard under the stairs in your factory at Kumamoto is a spy.

At night, when all your workers have gone home via that little karaoke bar on the corner, he creeps out to unleash his secret weapon – an unlimited supply of buttons paid for by the other Japanese manufacturers.

And by the time the rising sun of Nippon creeps into the eastern sky at dawn, he has stuck all of them on to the new Africa Twin.

As a result, they’ve been sneaking out of the factory without your quality control chappies noticing that there are 14 buttons on the left bar. Fourteen!

And if that wasn’t bad enough, another four on the right. Sack your Head of Button Counting immediately.

After I picked up the bike from Mark McCully of dealer Charles Hurst, bringing a tape measure to make sure we stayed 2m apart, there was only one solution – use the traditional bloke method of pressing all the buttons until something happened, then if all else failed, as a last resort, read the manual.

I started at dawn and, as darkness fell that night, was just about to give up when I heard a mysterious hissing sound which at first I took either to be a cobra in the undergrowth (unlikely in Belfast, I grant you) or my liver finally collapsing after over-enthusiastic lockdown drinking.

But then the bike started to mysteriously levitate as if by magic and closer inspection of the splendid TFT screen revealed that I’d changed the electronic suspension setting from Anorexic Jockey to Two Sumo Wrestlers with Kitchen Sink. Although why sumo wrestlers need a kitchen when someone else does all their cooking is beyond me.

Anyway, where was I before I interrupted myself? Ah yes, realising that it was time to have a midnight snack, go to bed and actually go riding the next day, which happened to be my birthday.

I’ll have more details in my next report, but on a nice run down to the coast for ice cream, it was obvious that the bike had more grunt than its predecessor and great brakes, with lovely feel and bite from the back for trailing into downhill corners.

A quick toggle into Urban mode made the power delivery nice and docile through town, and the most impressive change of all was when I changed the suspension from one rider to one rider and luggage to take into account the fact that I’m heavier than the average Honda test rider, who weighs the same as a wet lettuce.

The result, as the bike hunkered down, shot its sleeves and eyed the next corner like Bond sizing up Blofeld/his next female conquest/a martini, was fabulously pinpoint handling.

Will it beat the BMW R1250 GS, the king of adventure bikes and a grand more? Only time will tell.

Stand by for a full report next time, once I’ve figured out which button to press to get back into my house.

The cat’s gone and changed the alarm code again, the little furry fiend.