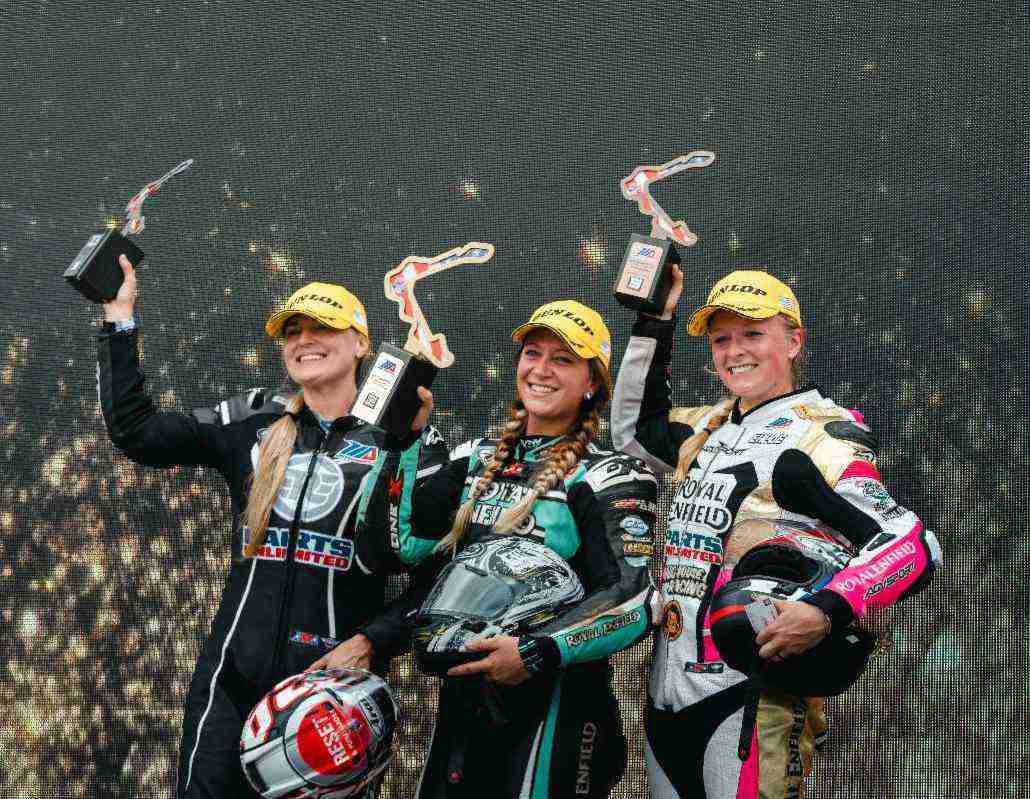 Kayleigh Buyck (center), Crystal Martinez (left) and Chloe Peterson (right) made up the Royal Enfield BTR podium at the Pittsburgh round of MotoAmerica

Extreme heat, torrential downpours, tricky track conditions, through it all at Pittsburgh International Race Complex shined the heart and dedication of the Royal Enfield Build. Train. Race. (BTR) road racers. It wasn’t an easy weekend at Pitt Race, especially not with the much-anticipated Sunday main event ending in a red flag. Though it wasn’t the finish anyone was looking for, including winner Kayleigh Buyck, there were some memorable and redeeming moments from the MotoAmerica weekend.

There’s no doubt Kayleigh Buyck has the bullseye on her back in the Build. Train. Race. MotoAmerica paddock. Coming off a three-race win-streak, Buyck was looking to add another BTR race win to her collection, and the rest of the women on the grid were just as determined to stop her. None more so than Jenny Chancellor, who came into Pittsburgh fired up for a win.

Throughout the changing conditions at Pittsburgh International Race Complex, the BTR women were advised to keep their rain tires on, which saw them run the main race on wets in the drying conditions. After getting out to a poor start, Chancellor quickly made her way to the front and led every lap of the race aboard her Continental GT 650, right up until the moment it mattered. On the final lap, she lost control and went down, prompting the red flag to come out. Had she gotten back on her bike and back on the track, she would have been awarded the win, but sadly she ended the day with a DNF. The win went to Buyck, followed by Crystal Martinez in second and Chloe Peterson in third.

“What a crazy, amazing weekend at Pitt Race!” exclaimed Chancellor. “I feel like I finally found my comfort zone on my Royal Enfield and rode great all weekend long. I was definitely disappointed to not finish the race, but I have already put this behind me and am looking forward to our next round in New Jersey.”

“Not the way I wanted to take a victory, ever, but racing is racing,” said Kayleigh Buyck. It was an otherwise stellar weekend for the championship leader. Buyck led the way in qualifying, and was awarded a Wilber Watch for taking pole position.

Podium finisher Chloe Peterson agreed with the sentiment, calling the weekend overall “a bit conflicted. Happy I made it on the podium again in third but not happy that it happened because of the race ending with a red flag. I wanted to see how my battle with Crystal played out. It was a tough race going out with full rain setup on the GT650 with a basically dry track. My strategy was to ride smart and not crash. I didn’t want a repeat of going down at Road America. I redeemed myself, made it on the podium and consider it a success.”

“Racing is not easy; there will always be challenges to overcome and variables beyond your control,” said Breeann Poland, Marketing and Communications Lead – Royal Enfield Americas. “These women dealt with all the challenges, kept putting in the work, supported each other and encouraged each other all weekend. Seeing the improvement every time we go out, the great racing and the smiles afterward are what make it all worth it. That’s what Build. Train. Race. is about.”

About Royal Enfield: The oldest motorcycle company in continuous production in the world, Royal Enfield made its first motorcycle in 1901. Royal Enfield North America (RENA) is headquartered in Milwaukee, Wisconsin, and is developing a growing network of more than 150 dealers in North America, including the contiguous U.S. and Canada. RENA currently offers the all-new Classic 350, Meteor 350, Himalayan and the 650 Twins (INT650 and Continental GT 650) motorcycles, along with a range of Genuine Motorcycle Accessories and apparel.