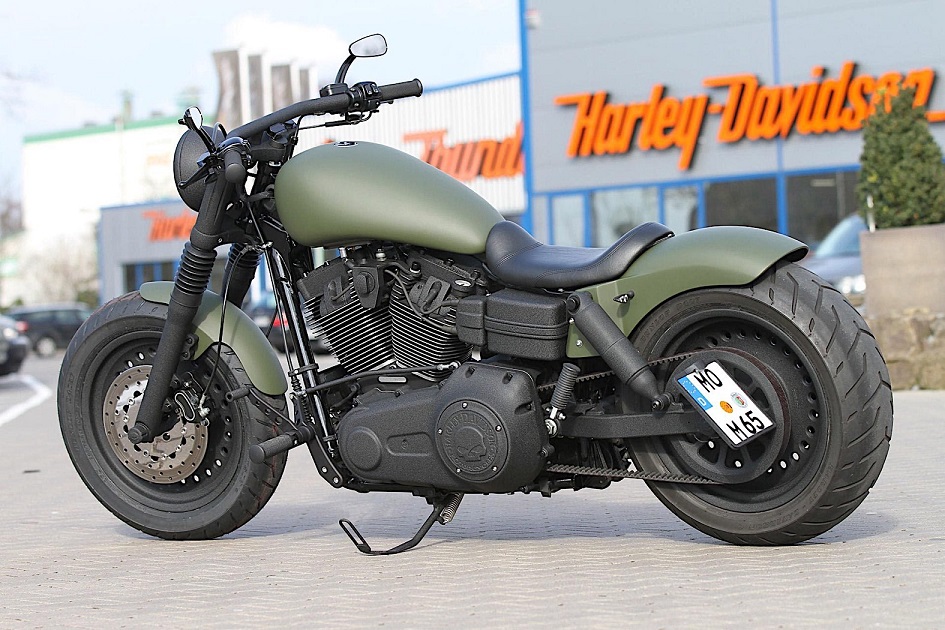 If you’re a bike owner, it’s very hard to decide on what customization path to go down on, especially when there’s nothing to inspire the build you want.

One way would be to leave the design and the build to the custom shop of choice, and trust that what comes out the garage’s doors at the end was worth the while and money spent.

The owner of the Harley-Davidson Fat Bob we have here seems to have done just that. He trusted German garage Thunderbike with the creation of a unique machine, and what resulted is the aptly called Wrinkle Bob.

The bike takes its name after the colors used all over the bodywork. Featuring powder-coated military green and Wrinkle-style paint, it looks extremely solid and matt, while at the same time presenting us with a very soldiery feel.

Unlike most of Thunderbike’s projects, the Wrinkled Bob was not subjected to an extreme makeover as far as mechanical modifications go, but there are changes to talk about, especially considering how expensive they are.

The biggest upgrades compared to the stock motorcycle are the fitting of a custom aluminum fuel tank, an air ride suspension system, and a new forward control kit. The two-wheeler also sports new fenders and a custom exhaust system the Germans call Dragonfly.

The Wrinkled Bob is one of Thunderbike’s older projects. As usual, we’re not told how much the project cost to make, but given the parts listed as being used by the garage, we estimate the worth of the changes at around 7,500 euros (roughly $8,700 at today’s exchange rates). That’s not including the paint job and of course the base motorcycle – the price makes the Wrinkled Bob one of the more expensive projects the Germans have made over the years.