Harley Davidson and the Marlboro Man 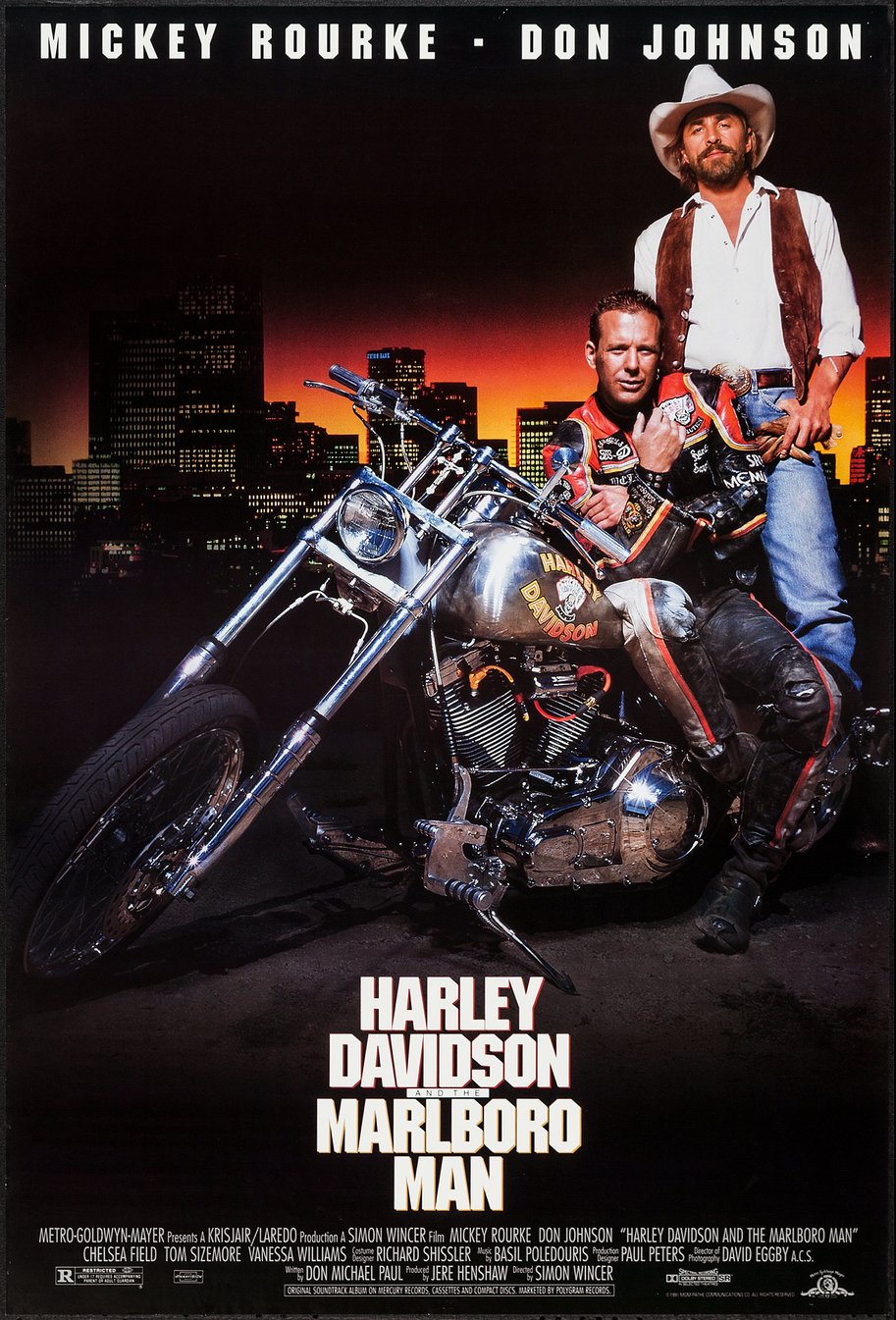 by Chris Bumbray from https://www.joblo.com

THE STORY: The year is 1996 – the future. A biker (Mickey Rourke) and his cowboy pal (Don Johnson) team up to save their favorite bar from going under. To pull this off, they plan a heist but wind up in possession of a massive load of a popular new street drug called “Crystal Dream.”

“I was fortunate enough to work on a film with Don, the only bad part was-the director sucked, but Don knew so much about behind the camera stuff, he used to tell director where to put the camera. It would be my pleasure to let anyone know Don Johnson is a very great actor and has been underrated for many years. I mean the guy so good looking, all he has to do is blink and you can’t take your eyes off him.- Mickey Rourke’s Instagram

THE HISTORY: Both Mickey Rourke and Don Johnson were in transition in 1991. Rourke was coming off of a slew of disastrous films, including the much-maligned WILD ORCHID and DESPERATE HOURS, while Johnson was still struggling to establish himself as a leading man in the wake of “Miami Vice” finishing its TV run. Thus, the two signed on to do this high profile, big-budget action flick, which I’m sure seemed like a can’t miss proposition at the box office to them both – this being the heyday of R-rated action.

Suffice to say, the movie was met with uniform hostility from critics, with many mocking the product placement in the title, with the leads being named after their favorite brand of motorcycle and cigarette. BUTCH CASSIDY & THE SUNDANCE KID this was not. It wasn’t helped that the film was marred by Rourke and Johnson publicly bad-mouthing it before it opened. In the end, the film’s box office performance wound up being disastrous, grossing only $7.4 million domestic. Ouch.

WHY IT’S GREAT: HARLEY DAVIDSON & THE MARLBORO MAN benefits tremendously from the second wave of popularity both of its leading men got later in their careers. At the time, Mickey Rourke was seen as a pain in the ass who squandered his talent and to be sure, the man soon left Hollywood altogether to take up boxing, only to finally make a huge comeback with THE WRESTLER years later. Whether or not his reputation was earned is questionable, but in hindsight, many of his late eighties films hold up well, so perhaps there was something else going on in the minds of critics. Ditto Don Johnson, who was trying to break out from TV, something you just didn’t do back then. You were either a TV actor or a film actor. You’d get the occasional Bruce Willis or Denzel Washington, but for the most part, the jump just wasn’t made – which is a shame as Johnson made some good flicks in the era, including DEAD BANG and the crazy underrated THE HOT SPOT.

Flash-forward to 2019 and both stars are icons in their way. While Rourke’s never-ending series of DTV movies have marred his rep somewhat, he also did THE WRESTLER and proved beyond a reasonable doubt that he’s still got it where it counts. As for Johnson, he beat the comeback trail with the great COLD IN JULY and contributed memorable roles to films like BRAWL IN CELL BLOCK 99 and ALEX OF VENICE. With KNIVES OUT in theaters and his role on HBO’s “Watchmen” getting him some of the best notices of his career, Johnson is back in the limelight, making this the opportune moment to revisit HARLEY DAVIDSON AND THE MARLBORO MAN.

I’ll be the first to admit – this isn’t a great film. But, if you can take it as goofy fun evocative of its time, it’s a memorable little lost nineties gem. You get exactly what kind of movie this is gonna be right off the bat, where Rourke foils a convenience store robbery to save a pretty young cashier (played by Kelly Hu) while Ted Wass (of “Blossom”!) snarls, “I’m gonna cut you long, wide and deep motorhead!” It’s a modern (for the time) version of an old Roger Corman B-movie, and in many ways predicted the FAST & FURIOUS franchise, with the emphasis on close-knit groups of outlaws becoming “family” and fetishized vehicles, here being motorbikes rather than cars.

Rourke takes the piss out of his role, with Harley a tough guy, but also one nursing a broken heart, with the best twist being that he has no idea how to fire a gun despite his best efforts. Similarly, Johnson brings an outlaw swagger to his denim cowboy part and had this been a better film, you could easily see the two leading a whole series – but the film just isn’t quite good enough.

I’d wager the problems stem from poor villains, with Tom Sizemore appropriately oily, although he should have been second fiddle. Ditto Daniel Baldwin, who doesn’t seem enough of a physical threat to the hulking Rourke or Johnson for that matter. Yet, the film has some decent action set pieces and a fun supporting cast, including a very young Giancarlo Esposito and Vanessa Williams. Plus, the score by Basil Poledouris is excellent, with good use of Bon Jovi’s “Wanted: Dead or Alive”.

BEST SCENE: Johnson’s swaggering Marlboro Man is a cool creation and he seems to be having the time of his life playing the part to its hilt. I especially like when he lays out his philosophy of life while kicking ass at the pool (Johnson seemed to have mad skills – with both this and “Miami Vice” frequently showing off how good he was behind a cue).

PARTING SHOT: Again, I hesitate to call this one a classic, but it’s an action flick I enjoy watching with some pals and a couple of beers. Heck, I make no bones about the fact that I’m a big fan of both leading actors and it’s an interesting look at a franchise that could have been with a better script and more creative direction.