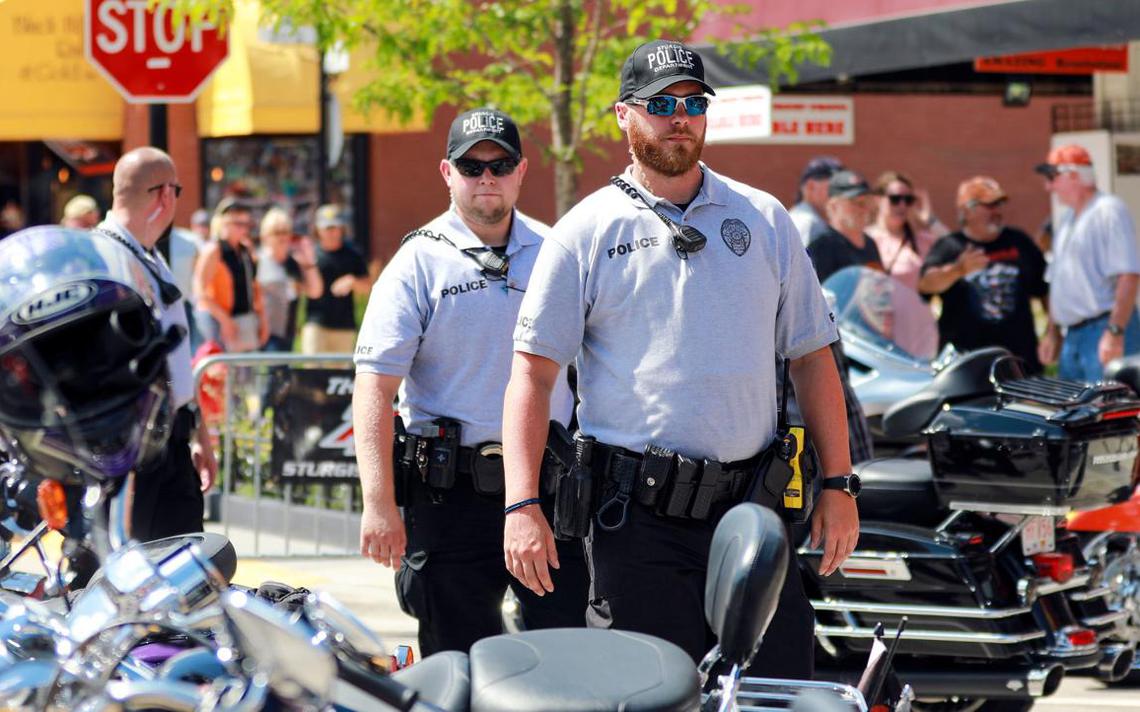 STURGIS, S.D. — Law enforcement agencies in Meade and Pennington counties are hiring more officers, temporarily opening a second jail and keeping a courthouse open seven days a week for the Sturgis motorcycle rally and the hundreds of thousands of free-wheeling visitors it will attract over the next several days.

VanDewater wouldn’t say how many temporary officers he hires but said they come from South Dakota, North Dakota, Colorado, Minnesota and other neighboring states. Some are working the rally for the first time while others, like one officer who is returning for his 41st rally, are repeat visitors.

Permanent officers will continue to work 12-hour shifts with no days off during the 10-day event, VanDewater said.

The Rapid City Police Department didn’t hire extra staff and isn’t requiring its officers to work overtime as they have in past years, said Captain James Johns.

During the rally, the Meade County court remains open during the weekends and the old jail — located in the basement of the courthouse across the parking lot from the new jail — is reopened, Merwin said. Extra staff from the area is hired to help the corrections officers, but they don’t carry handcuffs or weapons.

The old jail has large group cells made of “old iron bars” and “doors that clang and bang” that hold about 25 people, Merwin said. When people are arrested, they’re first brought to the old jail to be booked and detained until their court date the next morning. Guards take away their belts and shoes for safety reasons, but let them wear their street clothes. If defendants can’t make bond, they’re moved to the new jail.

“Every day, we clean out the old jail and get ready for a new batch,” Merwin said. “It is quite a procedure. It’s been working for years and everybody is pretty conscientious about everybody’s rights, and we try not to do anything different than we do any other time of the year.”

The Pennington County court functions as normal during the rally and while no extra jail staff is hired, workers aren’t allowed to take vacation or do any special training, Whelchel said.
Enforcement priorities

“You name it, we have it here,” VanDewater said about the crimes he sees during the rally.

But he said the most common issues Sturgis police officers deal with are people parking where they’re not allowed to, followed by drunken driving and drug use.

Cars and motorcycles illegally parked in alleys, handicap spots and other off-limits areas are ticketed and towed to impound lots, the police chief said. “If we just leave them there, we’re not fixing the problem.”

“We allow officer discretion. We just ask that the issue is addressed,” VanDewater said when asked if his officers have to let some violations slide since they’re so busy. “We give more verbal warnings than we do citations.”

VanDewater said officers may give warnings to people urinating in public, carrying open alcohol containers and breaking traffic rules by speeding or not wearing a seat belt. But anyone charged with violent crimes or DUIs will be arrested.

“They will go to jail, and we don’t need them hurting themselves or especially someone else,” he said of drunken drivers.

James said most of the Sturgis activity in Pennington County takes place outside city limits, on the highways, and in Wall and the Mount Rushmore areas. Rapid City officers are mostly focused on road safety and noted some popular stores and venues, such as the Harley-Davidson dealership in Rapid City, provide their own security. He said the department’s goal is to make sure things go smoothly and seem normal for those who work and live in Rapid City.

Pennington County deputies focus on traffic safety and stopping drunken drivers as they prepare for six or seven major motorcycle rides that cross through the county, Whelchel said. Deputies make sure they’re visible and stationed around the county so they can quickly respond to emergencies.

“We want to be able to save lives. That’s our goal every day we come to work,” he said.

Whelchel and James agreed that it’s important to distinguish between those who are recklessly breaking traffic laws and those who may make a mistake because they’re tourists who aren’t familiar with the area.

“We got to help educate folks and guide them,” Whelchel said.

James and VanDewater said they’re not worried about how the rally will be impacted by South Dakota’s new law that says permits aren’t needed to carry a concealed weapon. They said officers are already trained to act as if anyone could be armed.