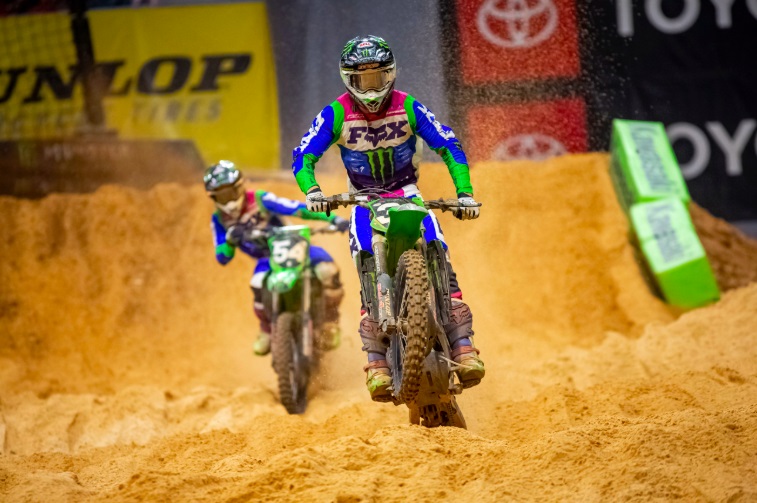 Foothill Ranch, Calif. (March 1, 2020) – Round 9 of Monster Energy AMA Supercross, an FIM World Championship made its way to Atlanta, Georgia, where Monster Energy® Kawasaki rider Eli Tomac overcame a difficult main event, putting together a strong ride to come from behind to finish fourth and hold onto the red-plate.

Eli Tomac scored his first pole position of the season by setting a blistering time of 50.294 seconds marking the eighth time in nine races a Kawasaki rider has earned the pole position in the 450SX class.

As the gate dropped on the second heat race of the night it was the No. 3 KX™450 rocketing out the gate, grabbing the holeshot and checking out from the competition. Tomac crossed the finish line with an impressive nine-second lead to take the heat race win.

In the 450SX Main Event Tomac found himself buried off the start with his work cut out for him. As he began charging forward making his way up to seventh place, his progress was quickly halted when he and another rider came together, sending Tomac back to 15th place. Tomac began his charge forward, but a small mistake caused his bike to stall, a quick press of the electric start button on the handlebar minimized the damage and from there Tomac put together an amazing performance, riding from behind to narrowly miss the podium with a fourth-place finish. Tomac heads to Daytona tied in the lead for the 450SX championship point standings with Ken Roczen.

This weekend’s race in Atlanta marked the first time in Monster Energy Supercross history that a race would be held on leap day.

“The main event didn’t go as planned, but the good news is we live to fight another day and line back up next weekend at one of my favorite tracks, Daytona. There are still positives to take away from today; we were fastest qualifier, won our heat race, and we never gave up in the main event, and battled hard all the way to the very end to salvage as many points as possible. We are going to put this race behind us and be ready to rock next week in Daytona!” – Eli Tomac

This weekend marked Round 3 of the 250SX East Coast Championship, where Monster Energy/Pro Circuit/Kawasaki Jordon Smith bounced back to score a top-5 finish and teammate Garrett Marchbanks not far behind in seventh.

The Monster Energy/Pro Circuit/Kawasaki powerhouse combo kicked off the day by Marchbanks qualifying in fourth and Smith in sixth.

The second 250SX heat race saw the No. 54 machine of Smith once again rocket his KX™250 out of the gate, and immediately challenging for the top position. Meanwhile, teammate Marchbanks found himself buried off the start and found himself in twelfth place at the end Lap 1. Marchbanks having his work cut out for him, began slicing and dicing his way past the competition on the tight and narrow track and was able to climb up to fifth place. Smith continued to jockey for position the entire race, and with two laps to go he pulled the trigger on making a pass stick for second place.

As the gate dropped for the 250SX Main Event, both Monster Energy/Pro Circuit/Kawasaki riders ripped out of the gate aboard their KX250 motorcycles in the top-5 where they would both spend the vast majority of the race battling for position. Marchbanks eventually would make a pass on his teammate Smith and began going after third place, however a mistake would send Marchbanks off course causing him to reaggravate an old injury. Marchbanks did everything he could to ride through the pain finishing in seventh place. Teammate Smith rode smart and consistent crossing the finish line in fourth place.