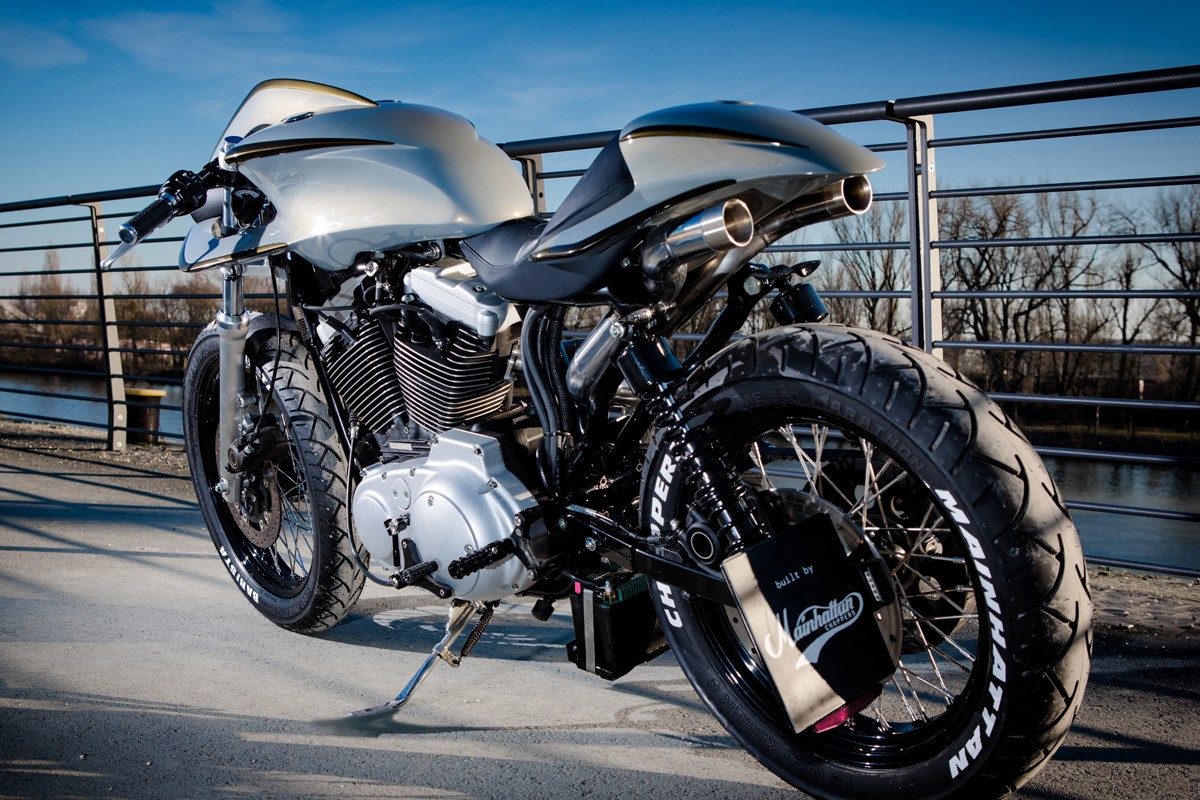 Seeing creatively customized motorcycles never gets old, so let’s have a look at another.

BAR!STA’s story began when a Harley Davidson XL1200C arrived on the doorstep of a workshop based in Frankfurt, Germany. That would be none other than Mainhattan Choppers, a firm with an extensive portfolio of custom two-wheelers. It was co-founded by Harald Geiger, along with Martin Lison and its talented crew is prepared to go above and beyond to satisfy customers’ expectations.

Now, as to Harley Davidson’s XL1200C, it is one mean, loud and truly ferocious animal. The thing is powered by a monstrous four-stroke V-twin with a displacement of 1201cc and a five-speed transmission, nested inside a mild steel tubular frame. This air-cooled engine is equipped with Evolution pushrods and hydraulic overhead valves, delivering up to 79 pound-feet (107 Nm) of torque output at 4,000 rpm.

As far as suspension goes, XL1200C featured 39 mm forks at the front, along with adjustable shocks, coilovers and an MIG welded swingarm at the rear. Back to the front, its five-spoke cast aluminum wheel wore a 292 mm (11.5 inches) disc and two-piston calipers, along with a 260 mm (10.2 inches) rear disc and single-piston caliper.

To give birth to their BAR!STA café racer using this Sportster as the starting point, the folks over at Mainhattan Choppers drew inspiration from the solid correlation that seems to exist between the passion for motorcycles and a sincere love for caffeine. In fact, this is exactly how the term ‘café racer’ came about in the first place.

For this project, the team decided to collaborate with Ian Alderton, a remarkable individual with an experience of over 19 years in Honda Europe’s R&D department, as well as several builds of his own, such as a Moto Guzzi Le Mans, Ducati Mike Hailwood Replica and a Rickman Bonneville. Briefly speaking, the BAR!STA was in safe hands.

That unique bodywork is unlike anything I’ve seen so far on a Sportster and has to be the most outstanding feature on this gorgeous thing. It brings a great deal of refinement to a very rugged machine, which is an interesting, even fascinating approach.

The unusual design consists of three wings extending out of the fuel tank and around the handlebars, to then surround the headlight. This truly authentic setup isn’t exactly something you’ll see on a daily basis and we certainly appreciate the sheer amount of creativity that’s gone into it!

While a rectangular, edgy design language is the weapon of choice for most café racers, Mainhattan Choppers took a radically different approach with BAR!STA. The curves on this baby are incredibly sexy in their simplicity and elegance.

Furthermore, XL1200C is now provided with a wider two-into-two custom exhaust that was fully assembled in-house by Mainhattan’s deeply passionate crew. It is intended to grab the attention of even the most pretentious petrolheads out there, and I’ll bet it succeeds.

However, the best part about this BAR!STA is that the German firm is now producing body kits that feature its memorable design, with a price tag starting at only €10,200 ($12,050 at current exchange rates) for the base model. They come in three variations and can be fitted on virtually any Sportster to make it look otherworldly.

What are your thoughts on this custom Harley Davidson XL1200C from Mainhattan Choppers?