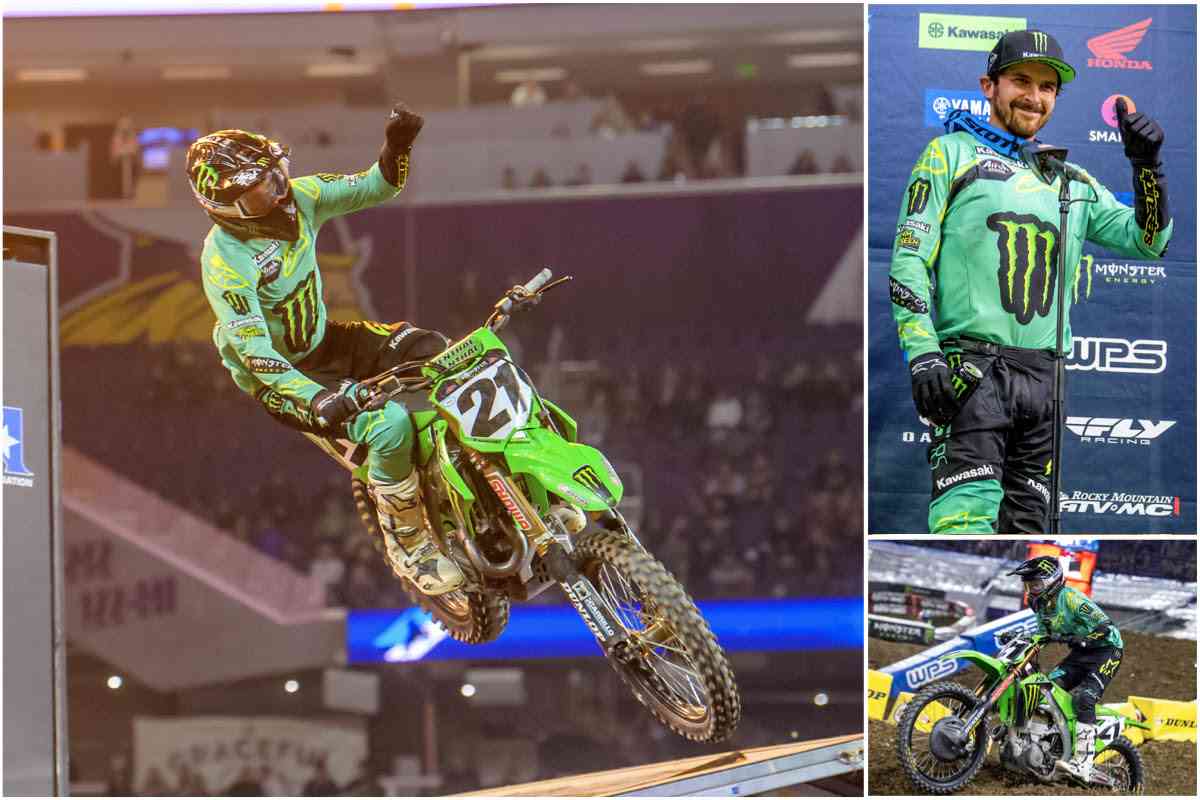 Foothill Ranch, Calif. (January 20, 2022) – Round 7 of the Monster Energy AMA Supercross Championship turned a cold shoulder to the sunny skies of the California coast as race fans were met with snowy air and subzero temperatures in Minneapolis, where Monster Energy Kawasaki’s Jason Anderson earned the 450SX Class victory, making him the first three-time winner in the class this season. The 250SX Eastern Regional Championship kicked off with Team Green™ flanking the podium with Monster Energy/Pro Circuit/Kawasaki riders Austin Forkner and Cameron McAdoo finishing in second and third place, respectively. Fellow Monster Energy/Pro Circuit/Kawasaki rider Jett Reynolds sustained a wrist injury prior to the race that will postpone his pro debut indefinitely.

With veteran understanding of the unique Minnesota dirt, Anderson started his day with a clear intention of letting the track come to him. While the riders’ morning track walk daunted many as they recognized peakier jump faces and softer dirt than have been faced so far in 2022, Anderson expressed to the team his game plan of patiently allowing the track to develop and the transitions to wear in before pushing to race pace. The qualifying sessions went according to plan as Anderson tactfully waited until the final laps of the final session to jump to the top of the leader board. When qualifying concluded, Anderson’s 47.94 lap time earned him third position heading into the race program.

When the second 450SX heat race got underway, Anderson emerged from the first turn in 10th position. The Monster Energy Kawasaki KX™450SR rider had his work cut out for him as the track proved to have few viable passing areas during the short heat races lasting only eight minutes plus one lap. On par with what has come to be expected of him, Anderson paired fast laps with quick passes to set the best lap time of the race (48.69) to charge his way up the running order. When the checkered flag flew, Anderson crossed the finish within a bike length of third position, securing a fourth-place result and a direct transfer to the Main Event.

The start of the 450SX Main Event saw Anderson jockey for position at the front of the pack, settling into third place by the time the green flag waved. The No.21 Monster Energy Kawasaki pilot matched the pace of the leaders while enduring pressure from behind and allowing the race to unfold around him. On Lap 10, Anderson made a pass through the flat corner neighboring the mechanic’s area to take control of second place. For the latter half of the race, Anderson held close in tow of the lead as the two riders ran at a speed that would separate them from the field. With only two laps remaining, Anderson’s tactful measure proved key when the leader crashed, and he took control of the lead. Anderson went on to claim his third win of the 2022 Monster Energy Supercross Championship and now stands only three points shy of the championship lead.

“The track broke down a lot by the Main Event tonight but, that’s something we kind of expect with some of the East Coast tracks. I’ve been doing my best to prepare for it while practicing in California by riding with the Pro Circuit team every Thursday to sort of simulate race conditions. That helped tonight but, this was still a tough track for pushing the pace, and you kind of just had to let the race come to you. It’s awesome to have three wins already in the season but, we will keep taking it one race at a time as we go forward from here.”
– Jason Anderson

After much anticipation, Monster Energy/Pro Circuit/Kawasaki riders Forkner and McAdoo were eager to prove their place among the title contenders in the opening round of the 250SX Eastern Regional Championship. From the start of first practice, the Team Green duo quickly mastered the track and began fighting for the top qualification spots. At the end of the timed sessions, Forkner claimed the first pole position of the year with a fast time of 48.56, while McAdoo’s 48.81 lap time was quick enough to qualify him in sixth position. 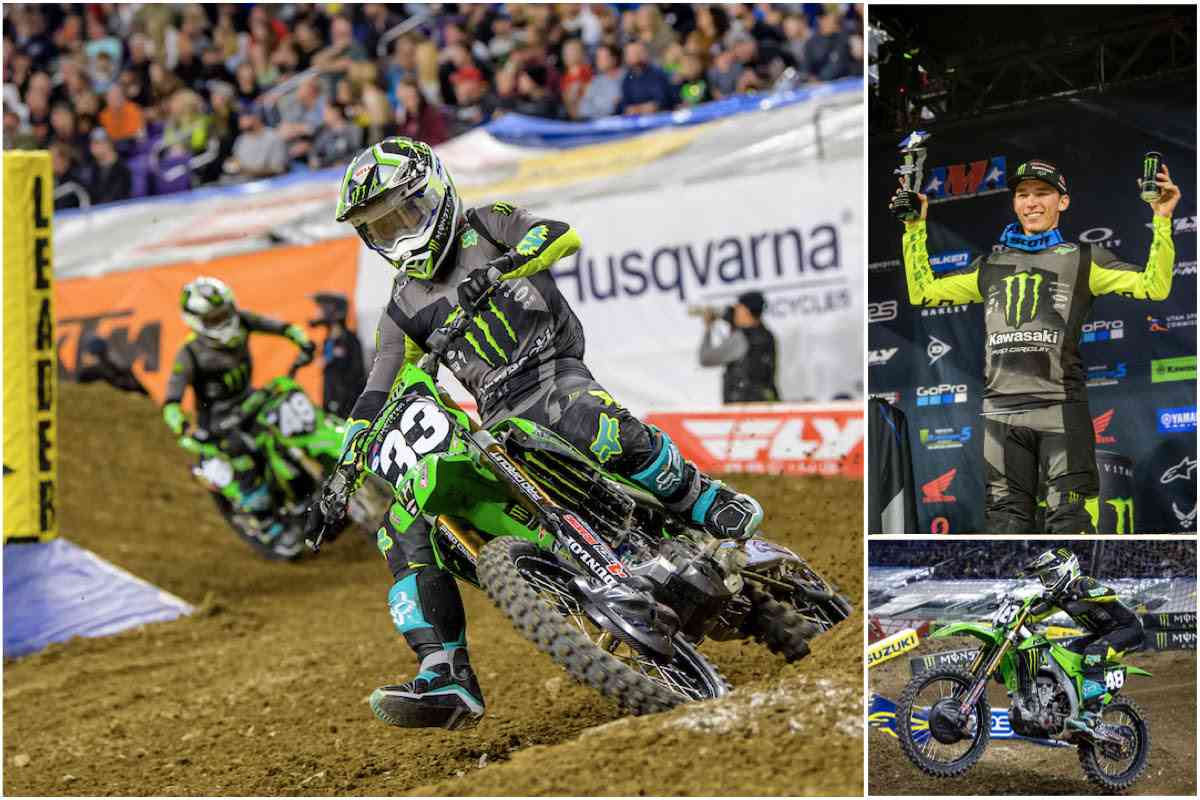 In the first 250SX heat race, McAdoo found himself held up in the middle of the pack before coming through the first rhythm lane in 10th place. With his sights set forward, the No.48 KX™250 rider began quickly picking off the competition in the opening laps. Strong whoop speed and a readiness to alter his line choices lap-by-lap helped McAdoo make his way to sixth place by the end of the short qualification race.

In 250SX Heat 2, Forkner started the race in fourth place. Attempting to push his way to the front, Forkner made a few mistakes in the opening laps that shuffled him back several positions. The Missouri native was quick to regain his composure by the mid-point, however, and began to move forward once again. Matching his intensity with a respect for the technicality of an already deteriorating race track, Forkner secured fourth position when the heat race concluded.

The 250SX Main Event once again hosted green at the front with Forkner launching his KX250 out to the holeshot and leading the pack through the green flag lap, while McAdoo followed close behind in third. The No.33 of Forkner was overtaken on Lap 2 but held close in second place. The Team Green duo of Forkner and McAdoo proved themselves to be among the class of the field running in podium positions throughout the race. McAdoo fended off the pressure of several top contenders as he pressed forward, keeping Forkner in close company. In the late stages of the race, the distance between the top five grew even closer but, the front three never shifted position. The Monster Energy/Pro Circuit/Kawasaki mounted Forkner secured second place and his teammate McAdoo was right on his tail in third, making it a double podium result for Team Green.

“A podium finish is always a nice way to start the season. I was the fastest qualifier in the timed sessions and had a decent heat race. I grabbed the holeshot in the Main Event, I’ve been focused on making sure my starts are on point this year, so I was happy with that, and I just tried to focus on putting together clean laps. There weren’t many obstacles to separate the front guys on this track, so it came down to minimizing mistakes. My laps were consistent and I’m glad to have come away with a second, we are still right there in the points.”
– Austin Forkner

“With the short lap times, we had to do a lot of laps on a technical track tonight, so I did my best to lock-in. When competing against a class as stacked as this 250SX East championship, it was important for me to just focus on hitting my marks and execute each lap. I’m happy to get through the opening round with a podium and I feel confident heading into Arlington next weekend.”
– Cameron McAdoo