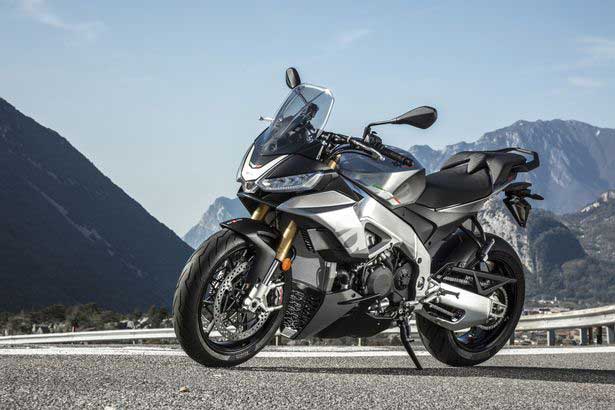 Back in the day, powerful bikes were thrilling and terrifying, but this naked Italian beauty has all the thrills and none of the terror thanks to a brain that works faster than the rider’s. Well, Geoff’s, although that’s not saying much.

I started doing bike tests in 1846, before bikes were even invented, so I just sat on a fence making bike noises, then hauled out a quill pen and a sheet of parchment and sent in my review to Velocipede Monthly on a passing donkey.

When bikes finally came along, I remember being simultaneously thrilled and terrified by some superbikes, such as the Kawasaki ZX-10R.

You got the feeling that at any moment it would fling you over the hedge, leaving you draped over a baffled cow called Gertrude, although it did get less frisky when Kawasaki fitted a steering damper to later models.

However, I realised at the launch a while back on the Suzuki Hayabusa that I wasn’t a bit scared.

There are several possible explanations for this. Either I’ve taken on board the advice I read from a psychiatrist recently that fear and excitement are just two sides of the same coin in your brain, so when you feel afraid, pretend it’s excitement.

I tried it on my first time back flying after lockdown, and it worked.

Another alternative is that I have become an astonishingly skilled rider, but since that’s highly unlikely, I suspect the answer is that bikes today such as this one are fitted with so many safety features that you’d need to be a complete idiot to end up draped over Gertrude.

I’m talking about cornering ABS, cornering traction control, anti-wheelie control, launch control, adaptive cruise control and so many other controls that before long we’ll be able to send bikes out on their own, and they can come back and tell us what a great day out they had.

And don’t laugh – BMW has already shown off an R 1200 GS which can tootle around without a rider, and that was back in 2018.

Anyway, where was I? Ah yes, just about to climb on board the Aprilia Tuono V4 Factory, the Factory bit meaning that it’s got electronically adjustable semi-active suspension, lower bars, better tyres and a more comfortable pillion position than the £15,500 base model.

In spite of the lower bars on the Factory, it’s surprisingly comfortable, even for the taller motorcycling chap, which is a welcome relief from the days when sportsbikes hunched you over like the love child of Quasimodo and Richard III and left you calling by the chiropractor on the way home.

Which left me free to admire the rather useful mirrors and a 5in TFT screen which is much clearer than on the previous Tuono, with bigger, brighter graphics which show you everything you need at a glance, including road riding modes, which can be either Tour, Sport and User, where you can geek out to your heart’s desire. There are also three track modes.

Acceleration, even in Tour mode, is gloriously lusty, accompanied by a visceral howl from the V4, handling is sublimely light and precise, and braking is as brutal but seamless as acceleration.

It’s a bike that’s impossible to unsettle no matter how ham-fisted you are in and out of corners, even on rough surfaces. Remarkable.

I spent a very happy hour getting lost on the rural A and B roads of Armagh, Northern Ireland’s apple country, feeling like I was on a bike I’d owned for years, rather than just picked up an hour ago.

Tweaked fuelling from the old model, and a firm but slick quickshifter to snick up and down the six-speed box just add to the feeling that this is a very well-sorted package indeed – fast but safe, agile but stable, and sporty but comfortable.

Switch to Sport mode, and it’s as if the bike’s been given a large and probably illegal dose of steroids, and yet even with the suspension firmer and the acceleration even more ludicrously breathtaking, it still never feels unsafe or unsettled, with the bike’s brain working faster than yours can to keep the bike stable under all conditions.

Well, my brain, anyway. Now if you’ll excuse me, I’ll put away my quill pen and roll up the parchment, since I see a donkey approaching, and the editor of Velocipede Monthly is an impatient sort of chap.