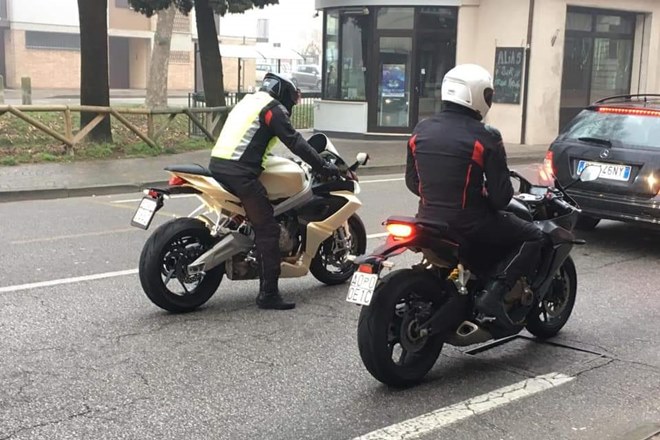 Aprilia’s middleweight supersport – the RS660 has been snapped testing doing test runs, image courtesy Aprilia Forum. What is even more interesting is the fact that the middleweight Aprilia was snapped alongside a Honda CBR650R, possibly due to performance comparison and some other aspects. The RS660 test mule that has been snapped looks production-ready and can be seen devoid of any camouflage on the body. The bike can be seen with well-finished body panels. As there is no test equipment mounted on the motorcycle, this further confirms that the bike is ready to enter production soon. The global debut of the Aprilia RS660 was earlier slated to take place on 9th May but the same has now been postponed with the Covid-19 crisis.

At the 2019 EICMA, the Aprilia RS660 concept was showcased for the first time which left a lot of visitors awestruck. This is all thanks to an impressive design language including the all-LED headlamp cluster upfront with sporty looking LED DRLs that should make the bike looks majestic and predatory in the dark. Moreover, what makes the RS660 quite interesting and worth waiting is its low kerb weight of just 169 kg and hence, one can expect an exciting power-to-weight ratio which should make it a great weapon for the racetracks. Now coming to the powertrain, the Aprilia RS660 is powered by a 660cc, parallel-twin motor that is good for producing a peak power output in the region of 100hp.

The bike also gets an impressive electronics package that includes a six-axis IMU along with wheelie control, traction control, quick shifter and five riding modes as well. India launch of the Aprilia RS660 is most likely and that should take place soon after its global debut. The RS660 is seeming a worthy middleweight supersport and in the current scenario, it will lock horns against the likes of the Kawasaki Ninja ZX-6R in the segment. Also, can you see it as something that can be a worthy alternative to the highly-respected Triumph Daytona? Well, only time will tell.