After a motorcycle accident, this man gained 60 pounds. Here’s how he lost the weight 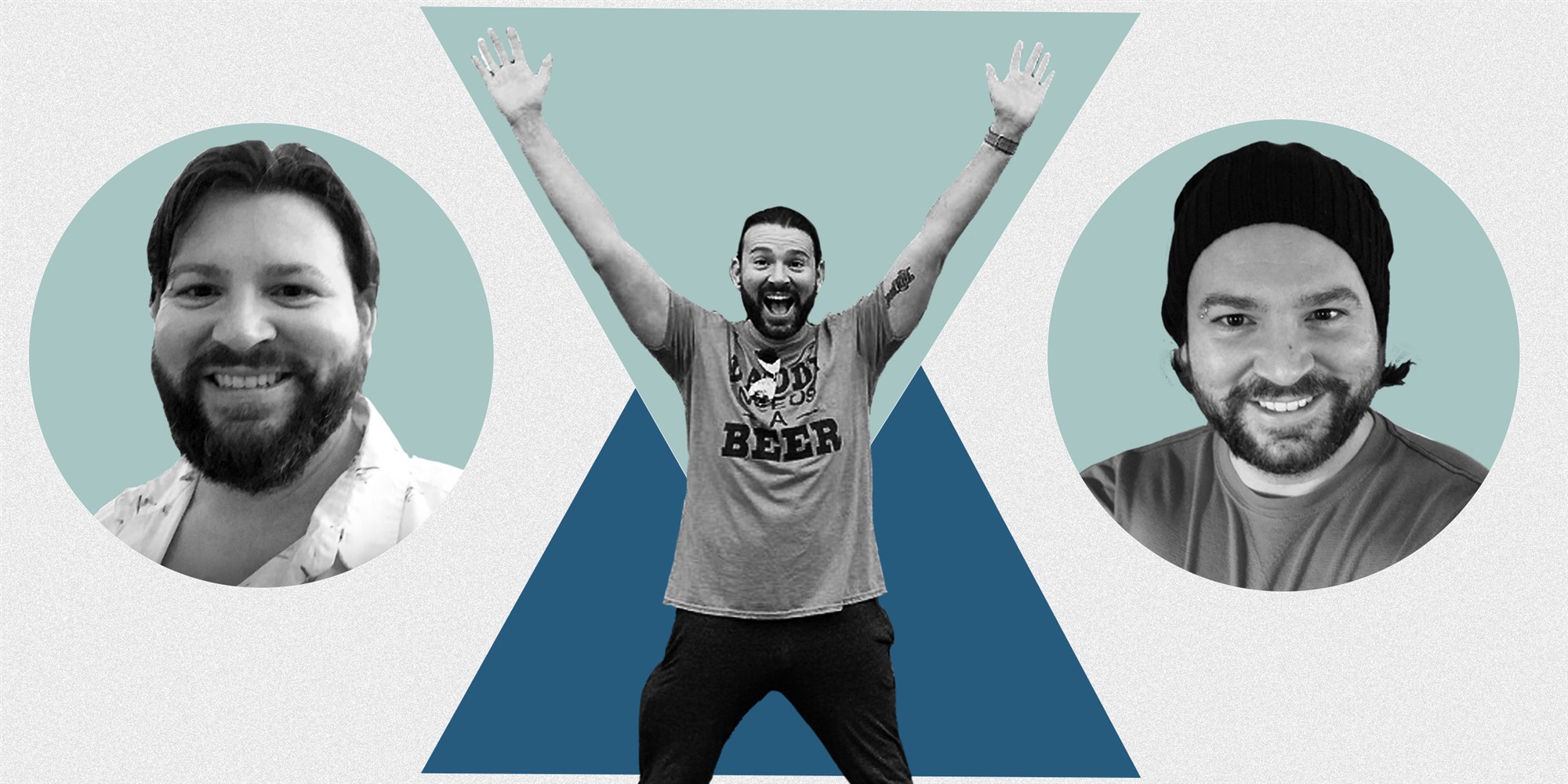 by Stephanie Thurrott from https://www.nbcnews.com/

After a motorcycle accident left Jeremy Bromwell sidelined and inactive, he learned to eat more mindfully and is now healthier than ever.

Residence: Full-time RVer based in Florida for the winter

Jeremy Bromwell always made it a point to stay active and maintain a healthy weight — he lifted weights at his gym and ran 5ks, 10ks and a half marathon. “[Exercise] was something I did pretty regularly to help keep my weight in check, so I wouldn’t be giving up the experience when I sat down to a meal at a restaurant,” he says.

That all changed in October 2014, when Bromwell was riding his motorcycle home from work in San Francisco and was hit by an SUV. The accident shattered both of the bones in his lower leg. He was expected to recover in about six months, but his bone became infected.

“Talk about adding some mental and emotional barriers on top of the physical. At the six-month mark I was supposed to be back to normal. That got blown up — it became ‘wait and see, we don’t know’. My brain was not able to wrap around it,” he says. Bromwell needed 10 surgeries before that bone healed properly, and the last one was performed in December 2016, more than two years after his accident.

“The motorcycle accident was the first time I had physical limitations imposed that I couldn’t work out on my own,” he says. “I lost control of the activities I could and couldn’t do. That was where I really started to struggle.”

He splurged as he healed

As Bromwell recovered, he concedes that he overdid it. “For a long time, I couldn’t do the things I enjoyed. As I started to get more mobility back and I was able to drive myself, I over-indexed for all the things I hadn’t been able to do, whether that was a glass of wine or a restaurant or both,” he says.

Samantha Cassetty, MS, RD, a nutrition and weight-loss expert with a virtual nutrition counseling practice based in New York City, understands the desire to turn to food after an event like Bromwell’s. “He went through a very tragic and challenging experience, and food can be such a source of pleasure and comfort. It’s the quickest route to feeling better,” she says.

Bromwell says his ramped-up social life contributed to his weight gain. “Once I could start to meet friends and colleagues out of the house it was nice to do that. That, combined with not being able to do things like weights a couple of days and cardio three to five days, was the catalyst for the weight gain.”

Cassetty points out that while exercise isn’t as useful for weight loss, it’s very helpful for weight maintenance. “So, the decline in activity levels can definitely promote weight gain,” she says.

Bromwell gained 30 pounds, and during a four-month long road trip with his partner in summer 2017, trying restaurants in different U.S. cities, he added another 30 pounds.

Back in California in November 2017, Bromwell and his partner split up. “I was single for the first time in four years and I was really heavy. It’s amazing — when you see yourself every day you don’t see yourself changing. You look back and think, ‘What the hell happened to me?’”

He changed his life and focused on his health

Inspired by the summer road trip, Bromwell decided to try living and working on the road full-time. He also decided he needed to get serious about losing weight.

“I had a lot of leg pain from carrying around the extra weight. I wanted to move forward in a happier, healthier way and get back to my pre-accident weight, even though it seemed like an infinity away,” he says.

Cassetty recognizes that a lot of people, like Bromwell, want to get back to a previous weight. But focusing on the scale can be a challenge. “The number on the scale is often beyond your control — stress, sleep, age, medications, can all play a role,” she says.

She recommends goals you can control, like exercising twice a week, cooking two dinners at home, or meal prepping for an hour over the weekend. “When you focus on a goal that you can accomplish, it can lead to behavior change and that will typically result in achieving a more comfortable weight,” she says.

With a background in digital marketing and analytics, Bromwell loves tracking and understanding data. He also knew he wanted a healthy lifestyle, not a diet where he felt forced to give things up. “I learned enough about my body through all those surgeries that I knew I needed to listen to my body,” he says. “I wanted to make healthy choices in a mindful way.”

He started using the Lose It! app to log his food, bring together data about his activity and sleep, and track his progress toward his goal of losing a pound a week.

Cassetty says this type of tracking can be a good tool. “For those who appreciate the data and feedback, studies show that this form of self-monitoring can be very effective for weight loss, and research shows that many people don’t have any problems with it,” she says. It’s a personal choice, though. “Some people find it tedious and it can lead to an unhealthy obsession about food,” she says.

Focusing on portion size made a big difference for Bromwell. “I had to get back in the habit of cooking for one,” he says. “I had to figure out on the road how to make better choices. I had to balance the experiences of meeting people, seeing new places, and traveling solo with affordable and easier-to-eat healthy cooking.”

He explored farmers’ markets to find fresh, healthy ingredients. He also started weighing his food. “I’m not a person who wants to give something up. I’m more deliberate and more conscious. Instead of a high-calorie, high-carb meal I’ll have something steamed, fresher and leaner,” he says.

On holidays and vacations he still tracked what he ate, but he gave himself the flexibility to go over budget.

He became more mindful about his alcohol consumption

“If I wanted to have a glass of wine with dinner, I needed to have the calories available for that through more activity or by giving something else up. These things are all interconnected,” he says. “I do enjoy a glass of wine, but I’ve given up a lot of that now, too. It doesn’t actually give me as much satisfaction as the cost on the calorie side of things. It’s empty carbs so it’s much less frequent.”

Cassetty applauds how mindful Bromwell has been along his journey. “Throughout this process and by using the app, he’s learning how to eat foods that fill him up and make him feel better, and he has also learned what trade-offs he’s willing to make. It’s not about restriction, but about figuring out what’s important to him and what’s not,” she says.

He weighed himself just once a week

“I was not going to step on the scale every day. I had to do what I needed to do consistently, and get on the scale one time a week max. I was looking for bigger trends over time,” he says.

Cassetty says weighing yourself is another form of self-monitoring that has pros and cons. “It can be very effective if it doesn’t trigger any emotional distress. Some people find it helpful to weigh themselves more frequently. For those who feel any sort of negativity when hopping on the scale, there are other tools to consider,” she says. Routine lab monitoring is one option.

After 13 months, Bromwell was within a pound of his goal weight. “I did not feel like I was giving anything up. I was more conscious and more deliberate about my weight and my body and what I was putting into it,” he says.

Cassetty is thrilled to see Bromwell reaching his goal. She notes, though, that everyone’s weight-loss journey is different. “I don’t want people to compare their personal weight loss journey to Jeremy’s. Jeremy reached a point where he was eating more purposefully and healthfully, and he didn’t feel restricted or as though he couldn’t participate in a full life that included social activities and travel. Those are the feelings you’re going for — that you’re able to enjoy life fully and that you’re also able take care of yourself and nourish your body well. This point is different for everyone, so you need to find that magic spot for yourself,” she says.

Now Bromwell is on year three of full-time travel and work, and he continues to track what he eats. He celebrated his 37th birthday by climbing Crosier Mountain in Rocky Mountain National Park. And last year he traveled to India to be trained as a yoga teacher. “Yoga is something that helped me get back a lot of my range of motion and flexibility. I see a connection to yoga and body mechanics and how joints work. It helped me get back to a functional place in my life.”

After his trip to India, Bromwell gave up meat and eggs. He’s focused on the right balance of protein, carbs and fat. He starts his day with yoga and doesn’t eat breakfast until around 11 a.m., so he’s close to following an intermittent fasting schedule. “It’s a good idea to eat within an hour of a workout,” Cassetty says.

Breakfast: Greek yogurt with granola and fruit, or a smoothie.

Lunch: Salad, roasted vegetables, or leftovers from dinner morphed into something different.

Dinner: Tofu or bean protein, curry in the Instant Pot, or grilled veggies and a black bean burger. He still goes out to eat two or three times a week.

Cassetty says Bromwell has a nice start to his day and a solid emphasis on veggies with these meals. If he wants to further amp up his nutrients, he could add some nut or seed butter or chopped nuts to breakfast, and some protein at lunch.

“Tofu, lentils and chickpeas are great plant-based options. Hemp seeds, with 10 grams of protein per three tablespoon serving, are another way to boost protein content in meals. Jeremy can sprinkle some on top of his roasted veggies,” she says.