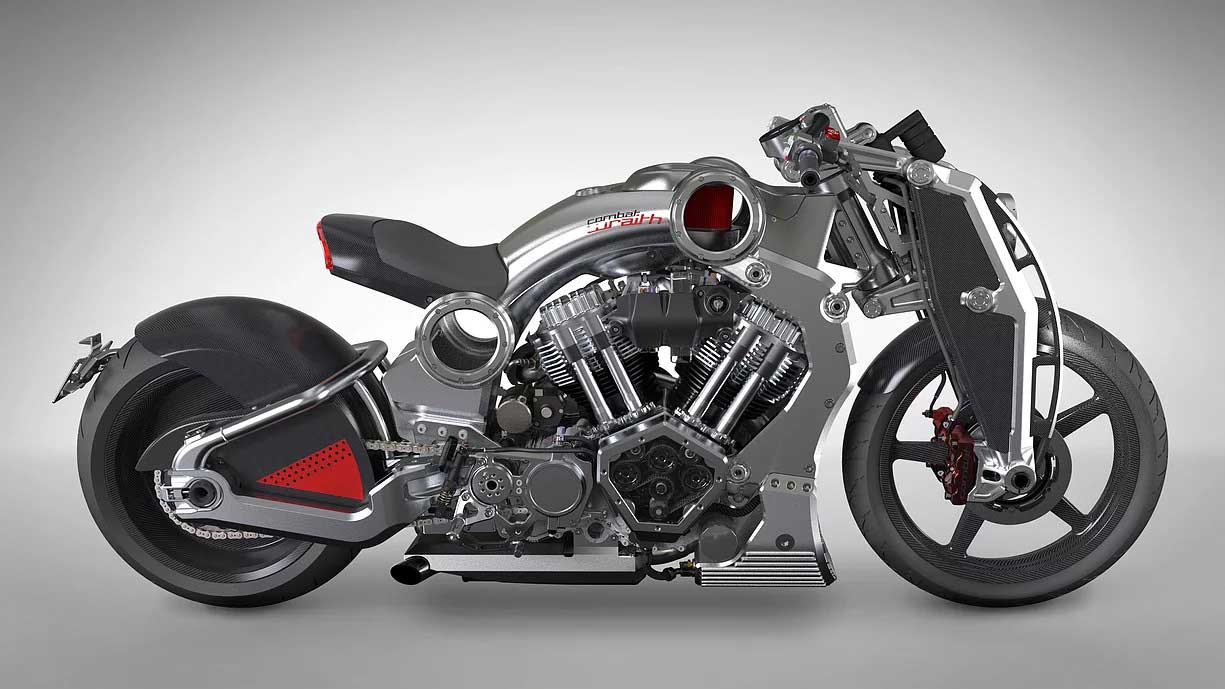 Combat Motors, American ingenuity meets uncompromising performance and detail. Manufacturer and developer of the F-113 and F-131 Hellcat, the B-120 Wraith, the P-120 / R-131 Fighter, the X-132 Hellcat, the Hellcat Speedster, the P-51 Combat Fighter, the FA-13 Combat Bomber and the F-117 Fighter, Combat Motors announces it’s all new Flagship model; the all new 2021 Combat Wraith.

Like the original Wraith which debuted in 2008, pushing the limits of American motorcycle manufacturing technology was the only place to start for such an example of raw art-in-motion. Inspired by the purist’s desire to not only stand-out but to be liberated to forge one’s own path in a world full of followers.

This second-generation Combat Wraith rides on the tried & true CX4 architecture with a brute force, 2.2 Liter big-block V-twin engine by S&S Cycle. The engine is an integral part of the bike’s construction acting as a stressed member, unifying and transferring as much unadulterated power to the ground as possible through the BST carbon fiber wheels to the Pirelli tread.

The iconically shaped structural fuel tank is CNC 5-Axis machined from aircraft-grade 6061 aluminum. Utilizing this style of machining allowed Combat to increase the bike’s fuel capacity to 4.5 gallons and provide the longest ride possible between refueling.

Combat Motors has reinstated the monocoque structure that was originally developed for the company’s P-51 Combat Fighter, while increasing airflow and efficiency through the redesigned structural air-box. Visibility of the twin-plate throttle-body is still made possible through a restyled oval glass just ahead of the fuel cap making it a crowning detail to the reimagined design of the original Wraith. This, along with the widely recognized visible cam timing cover and fuel tank windows, give the owner and any fortunate spectator full view of as many of the internal workings of this motorcycle.

“Combat Motors’ success and the new Wraith would not be possible without the concerted efforts our team; Jay and Jennifer Etheridge, Jason Reddick, Landers Sevier, Andrew Reuther and Frae “G” Wittwer.” — Ernest Lee

Combat Motors, continuing in the spirit of its former nomenclature, offers yet another industry first to the market. The new Combat Wraith will be built with interlinked forward and rear foot controls, offering its pilot the best of both worlds for quick trips across town or long rides up the coast.

Each new motorcycle produced by the company will also soon be constructed in the Birmingham, Alabama facility via live, high-definition streaming video. Once the primary components are staged and ready, each client will have the the opportunity to watch the step-by-step process of their own creation being constructed. One motorcycle at a time, Combat’s experienced master builder, Jason Reddick, will hand-assemble each motorcycle in full view of its future owner. A time lapse video showcasing the birth of the new motorcycle will then become part of the delivery package, giving each new owner an unparalleled ownership experience.

No more than Twenty-one (21) Wraiths will be built in either raw machined aluminum or as a Knight Wraith with black anodized finish.

The first new Knight Wraith is currently being built for Ernest Lee, owner of Combat Motors, who plans to ride the new motorcycle on a cross-country trip following Interstate 10 from Jacksonville, Florida to Malibu, California. Current owners of the company’s motorcycles are invited to ride either the entire length of the trip or individual legs with Ernest as he brings the next generation Combat Wraith west for its official debut later this year.

About Combat Motorcycles:
Continuing a 30-year tradition of designing and crafting America’s most iconic, heirloom quality motorcycles, Combat Motors aims to represent the motoring purist. Combat Motors currently manufactures the F-117 Fighter, P-51 Combat Fighter, the FA-13 Combat Bomber and the all new Combat Wraith by hand in its facility in Birmingham, Alabama.