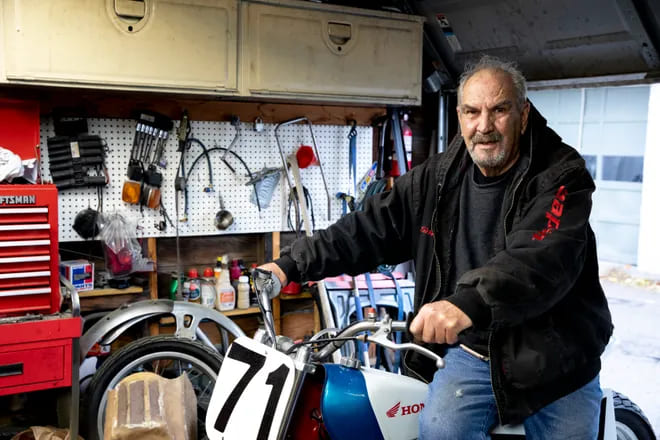 Procopio describes the moment of seeing his motorcycle again as “totally amazing.” That same night he went down to the speedway and raced it.

On Friday nights, the Lawrenceburg Motorcycle Speedway comes alive. The smell of exhaust fills the air and bleachers vibrate from the deafening roar of motors revving, as motorcyclists of all ages line up to compete in a high-adrenaline, high-risk race around a smooth dirt track.

These are the nights that James Procopio lives for. The 74-year-old Vietnam War veteran started racing motorcycles in his 20s, but had to give it up after family and life got in the way.

Procopio says he was diagnosed with colon cancer in 2011 and needed surgery to remove his intestines. He returned to the race track about four years ago after receiving his final chemotherapy treatment.

“I came down here one night, said, ‘Man, I sure miss that,’ and from that night on I put a bike together and started racing,” Procopio told The Enquirer, sitting in the back of a pickup truck on a cold, dark November night, the orange glow of a portable heater at his feet, while waiting for his turn to race.

Procopio worked for two years fixing up a red, white and blue 1980 Honda XR 500 to get it in racing form. But he was only able to race the bike once before it was stolen, along with his pickup truck, from his apartment in Mount Healthy.

The truck was recovered not long after it was stolen but the bike was gone.

“Every spare dime went into that bike,” he said.

Working out of his garage on old and vintage motorbikes, Procopio is somewhat of a local legend. He got his first job when he was 13 working on bicycles and motorbikes at Bishop’s Bicycle Shop in Silverton, where he stayed until he was drafted into the Army at age 19.

It was through his part-time mechanic work that Procopio met Ben Groh, who’s since become a good friend and racing partner. In the past three years since Procopio’s bike was stolen, Groh said he had been working to track down the missing bike on Facebook Marketplace and Craigslist.

“It’s popped up here and there for the past three years,” Groh said. “I’ve seen it come and go and I’ve been close to getting it and it slipped through the cracks.”

Groh’s brother spotted the bike at a local body shop, and he along with Rick Brun, another close friend of Procopio’s and fellow racer, were able to set up an undercover buy with Cincinnati police and retrieve the bike. It was returned to Procopio early last month.

Procopio describes the moment of seeing his motorcycle again as “totally amazing.” That same night he went down to the speedway and raced it.

Those who compete in flat track racing, in which racers drive on a dirt track with only rear brakes and must slide into each turn, describe it as more of a way of life than a sport.

“A lot of people don’t really understand it fully until you try it,” Groh told The Enquirer.

“It’s kind of like surfing: One good wave will call you back the rest of your life,” Brun said.

The last race of the season in Lawrenceburg was held Nov. 5.

But Procopio says he’s going to keep racing “as long as I can.”