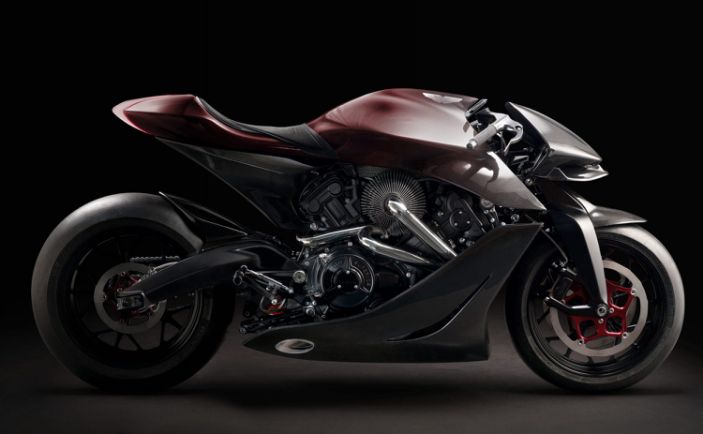 The words “cheap” and “Aston Martin” don’t typically go together, so it’s of no surprise that the upcoming Aston Martin motorcycle is ludicrously expensive.

Aston Martin teamed up with the motorcycle company Brough Superior to create the upcoming AMB 001. It’s a sleek, futuristic-looking thing that seems way more appropriate for the upcoming Cyberpunk 2077 video game than our lowly reality.

The two companies are currently in the testing stages for their new bike. The specifications aren’t yet final, but a Wednesday press release says that the bike will produce a claimed 180 horsepower from a turbocharged, 88-degree V-twin engine.

The turbocharged aspect of the AMB001 is especially interesting, as the majority of production motorcycles — save for a few attempts by Japanese companies in the 1980s — are not turbocharged. There are a couple of reasons for this.

First, as The Drive reports, packaging a turbocharger into a motorcycle is a difficult job. They add extra power and weight the bikes weren’t originally designed for. Turbos and all their related parts are bulky things and it’s not easy to fit them nicely on a bike.

Second, a turbocharged engine tends to produce very sudden torque. Cars, with four wide tires, are more suited to handle this. Bikes are not, so a sudden burst of power is more likely to spook the back tire and cause it to break loose uncontrollably, explains Cycle World.

Aston Martin, in response, says that the “modern turbine with low inertia is avoiding the turbo lag that was damageable on the Turbo motorcycle attempts from the ’80s.”

The AMB 001 is the result of a partnership between Aston Martin and motorcycle company Brough Superior.

A key design feature is the aluminum “fin” that runs along the carbon-fiber gas tank, under the saddle, and onto the rear.

The rest of the bike is largely made from light-weight carbon fiber.

It’s unclear if the rider will be able to see the full gauge cluster with the fin appearing to block some of it. Also, it sort of seems like the gauge cluster is an iPhone. Business Insider has reached out to Aston Martin for clarification.

Aston Martin says the AMB 001 will produce a claimed 180 horsepower from a turbocharged engine.

Production motorcycles are not typically turbocharged. This makes the bike extra special.

Here, you can see it wearing the traditional Aston Martin camouflage livery.

And being tested at a track in Pau-Arnos, France.

The leather seats are as well-crafted as any car interior.

No official weight figures are available yet, but Automobile Magazine says the AMB 001 will probably weigh “less than 600 pounds in final form.”

And that’s with all the turbocharger bits. Impressive.

Only 100 examples will be made.