Classic motorcycle ridden by George Lazenby has emerged for sale for £30,000 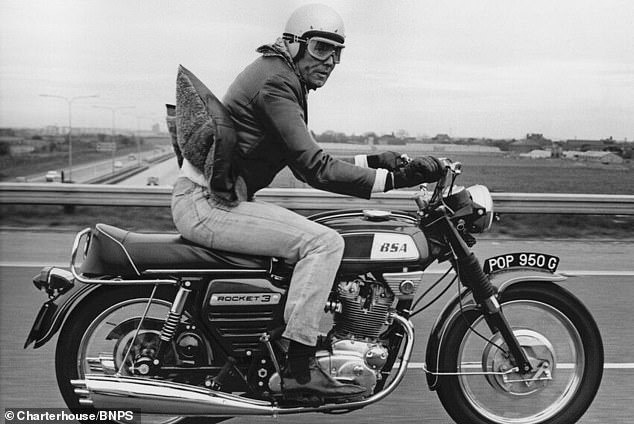 by Faith Ridler from https://www.dailymail.co.uk/

On Her Majesty’s Secret Service: Classic motorcycle ridden by George Lazenby to the set of his only James Bond film goes on sale for £30,000

A classic motorcycle which George Lazenby used to ride to the set of his only James Bond film has emerged for sale for £30,000.

The actor bought the BSA Rocket III in 1969 and rode it on his 17-mile commute from Bayswater, London to Pinewood Studios near Slough, Berkshire during filming for On Her Majesty’s Secret Service.

Mr Lazenby, now 80, went on to sell the motorcycle after the release of the sixth James Bond film later that year.

The Australian actor was the second to play the British secret service agent after Sean Connery in You Only Live Twice, who took on the role again in the 1971 film Diamonds Are Forever.

Little is known about what happened to the bike after it was sold by Mr Lazenby until it was bought by its current owner, a collector based in Kent, in 2007.

The unnamed vendor only discovered the machine was previously owned by the actor when he approached the BSA Owners Club, who revealed Mr Lazenby bought the motorcycle new in the 1960s.

The collector has now fully restored the bike, with an engine and gearbox rebuild, new chrome and a repaint.

During the restoration, a sidecar which had been installed after Mr Lazenby sold the bike was also removed.

It will now be sold by Charterhouse Auctions in Sherborne, Dorset – who say they are expecting a huge amount of interest from James Bond fans.

Richard Bromell, of Charterhouse, said: ‘Today the market for Bond films is bigger than ever, with many fans waiting patiently for the now postponed release of No Time To Die.

‘We all have our favourite Bond actor. Having watched from a young age, On Her Majesty’s Secret Service is one on my favourites.’

A spokesman for the auctioneers added: ‘Living in an apartment in Bayswater, Lazenby bought the bike to commute to Pinewood Studios for filming the new Bond film.

‘He was a keen motorcyclist and this was one of the very first new Rocket IIIs to be sold.

‘Not much is known about its history after Lazenby sold the bike until it was bought by our vendor 13 years ago – although at some point a sidecar was added.

‘The current owner is a collector of British motorcycles and purchased the Rocket with a view to restoring it to its former glory.

‘The BSA underwent a full program of restoration and was subject to an engine and gearbox rebuild, new chrome, and a repaint.

‘During the restoration the sidecar was discarded and it is now in great condition for the new owner.’