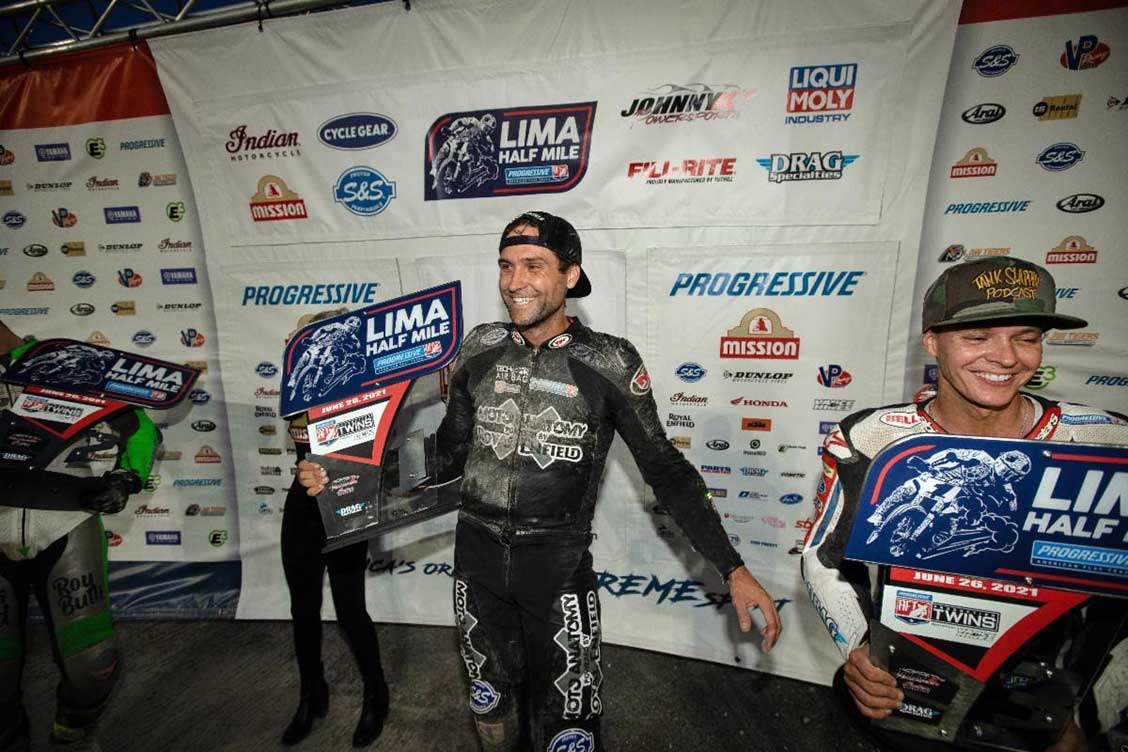 “This weekend gave us the opportunity to showcase what the Royal Enfield Twins FT is capable of,” said Moto Anatomy x Royal Enfield rider Johnny Lewis. “The team has been working extremely hard every time out to improve the motorcycle and this result reflects all the effort we’ve put into the program. We couldn’t be happier with this achievement. Thank you to Royal Enfield, the team and all our supporters for backing us.”

Lewis got out to a decent start in the main event but had to work his way into the lead, which took him less than a minute to do. From there, Lewis simply dominated the field, leaving the competition to battle over second as he stretched his lead. A red flag (due to a downed rider) with less than two minutes remaining prompted a restart, and once again Lewis had to make some passes to get out front, but he simply powered his Royal Enfield Twins FT around the outside, reclaiming the lead and taking the checkered flag.

Johnny Lewis’ win at Lima, Ohio comes after a steady season of progress with the Moto Anatomy x Royal Enfield Team. Following some flashes of brilliance aboard the Twins FT in the 2021 season, Lewis and the team knew they had the engine to be competitive, and worked on fine-tuning the chassis with their focus specifically on the Half-Mile. The classic venue at Lima, Ohio—the only cushion Half-Mile on the American Flat Track schedule—was the perfect stage for this significant victory for Royal Enfield.

“This historic win came at the right moment for the team, for Johnny and Royal Enfield,” said Breeann Poland, Marketing and Communications Lead – Royal Enfield Americas. “We started the season with a new crew led by David Lloyd and have been looking for our first win at a Half-Mile. We look forward to continuing our development and seeing Johnny progress even more throughout the 2021 American Flat Track season.”

Lewis and the Moto Anatomy X Royal Enfield team will be back in action on Saturday, July 24, at the Port Royale Half-Mile in New York. They will be joined by the Royal Enfield BUILD TRAIN RACE (BTR) program as the ladies are looking toward their next exhibition race at the same venue.