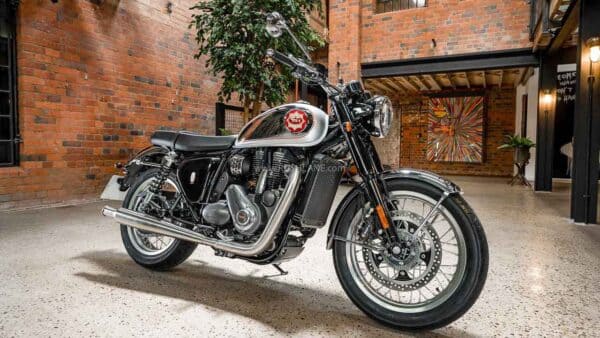 from https://www.rushlane.com/ by Pearl Daniels

A few days ago, BSA Motorcycles had officially announced their return via social media. The same was also retweeted by Anand Mahindra, helping stir up enthusiasm among BSA fans across the world. Now, their first motorcycle has been officially unveiled.

Birmingham Small Arms or BSA has officially mark its revival, with the unveiling of their first new gen motorcycle under the ownership of Classic Legends.

The new BSA motorcycle was showcased at an exclusive event in Birmingham UK.

BSA Goldstar 650
This new BSA motorcycle is likely to be called as Goldstar 650. It will be on public display at the upcoming Motorcycle Live show in Birmingham, UK being held from 4th-12th December 2021. BSA Goldstar 650 is likely to be powered by a single cylinder 650cc engine and will rival the likes of Royal Enfield 650 Twins in the UK and other markets hopefully.

It may be recalled that BSA Motorcycles became defunct in 1970s but with Classic Legends, a Mahindra subsidiary, in-charge of the BSA project since 2016, the brand gets revived with more focus on international markets. Classic Legends acquired BSA for approximately Rs. 28 crores.

With this announcement made, Classic Legends has lost no time in readying their new motorcycle. Test bikes have been spied on test in Pune, India. These bikes could also be produced in India at the company’s plant in Pithampur with exports to commence from early next year. 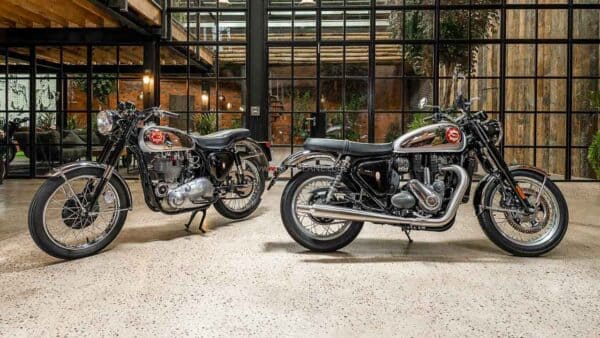 BSA Goldstar 650 – More details
Classic Legends has set up a technical and design center in Banbury, Oxfordshire followed by assembly of new motorcycles at the BSA facility in Midlands. This new BSA motorcycle will be positioned in the premium bike segment. It will boast of a classic design with the character of old BSA bikes but with modern underpinnings. It is set to go on sale in the UK first, but could also make its way to India.

The new 650cc will continue to exude a retro theme. It receives a rounded headlamp with integrated DRLs, LED tail lamp, tear drop shaped fuel tank and wide set handlebars. It will also get broad fenders at the front and rear. It will sport spoked wheels wrapped with Pirelli tyres. Extensive use of chrome is seen across its body, from headlamp to fuel tank extending to its exhaust pipe and engine casing. An elongated seat and an upright riding position will show off its retro theme.

Engine specs on the new BSA Goldstar are likely to include a 650cc motor making 47 hp power and 40 Nm torque. The engine will be liquid cooled to comply with future emission standards. It will receive disc brakes at the front and rear along with dual channel ABS as standard.

In other news, BSA Motorcycle Company has received a grant of 4.6 million GBP (Rs 45.20 crore) from the UK Government to develop zero emission motorcycles. These are being developed at the company’s R&D center in the Midlands, UK with production set to commence soon.