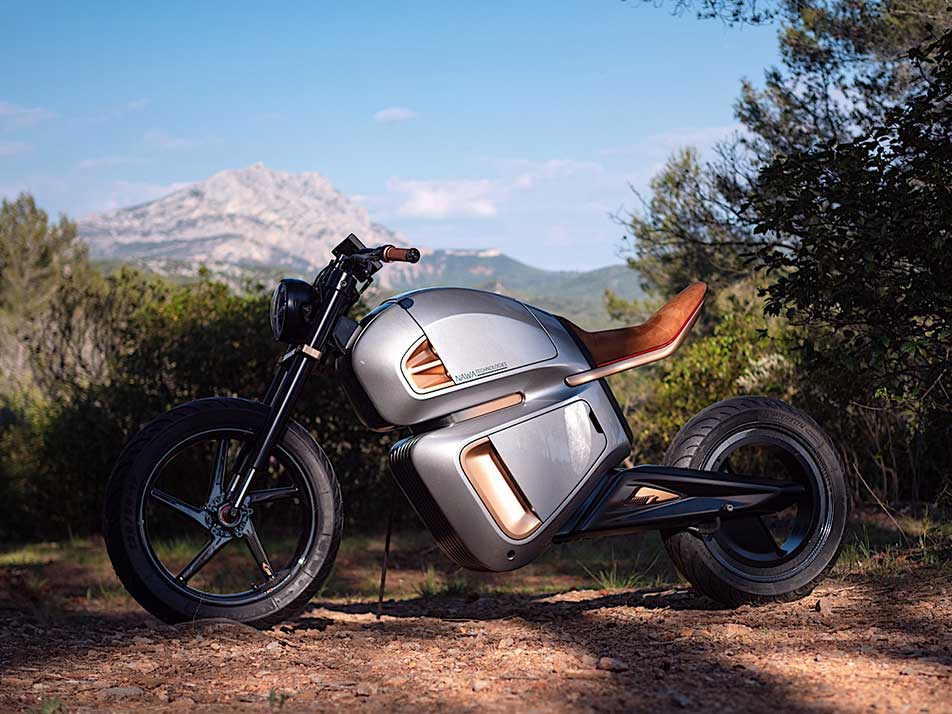 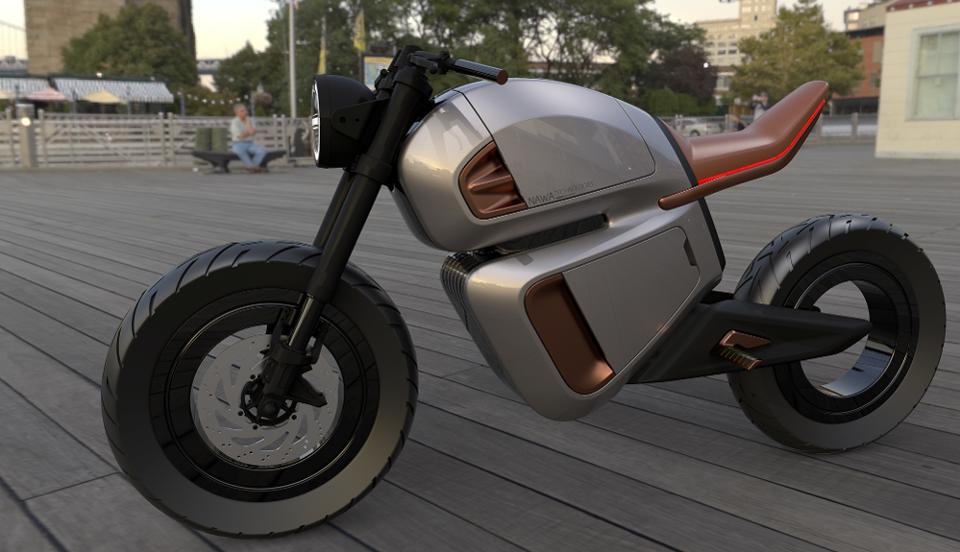 Despite the fact that they have built an electric motorcycle, French tech company NAWA Technologies, or just NAWA for short, isn’t in the business of building electric motorcycles – they build batteries. But maybe they should reconsider the motorcycle market option, especially in light of the one-off bike they did just indeed build, because it’s a serious looker packed with possibly industry-changing technologies.

The NAWA Racer’s sleek, minimalist styling comes courtesy of a collaboration with Envisage Group, who have been involved with Jaguar and other brands that want some cool lines with their new tech. One highlight is a hubless rear wheel, although the bike is covered in cool touches including the wrap-around LED taillight and duck-tailed seat.

But beyond the slick lines and hubless rear hoop of the NAWA Racer, the cafe-racer inspired from-the-future motorbike carries an underlying technology that significantly boosts performance and could signal a significant step forward for electric motorcycle performance – or the performance potential of anything that needs batteries for motive power, including electric cars.

NAWA has added a supercapacitor to the Racer (NAWA calls it an ultracapacitor, and have branded it as NAWACap), and the short version of the technese is this: A supercapacitor is similar to a battery, except it can be charged in seconds, and can then dump that charge at an extremely high rate – far beyond what a battery can provide – for an instant boost in power. It can also repeat that feat millions of times without any substantial performance losses. NAWA isn’t the first company to put a supercapacitor into service; supercar maker Lamborghini is integrating a supercapacitor system into their new Sián hypercar (sorry, but all 63 are sold out at $3.6 million per copy).

According to information provided by NAWA, the Racer has a relatively small 9kWh lithium-ion battery pack, and a .1kWh NAWACap ultracapacitor located in the upper pod above the pack in the frame. The inclusion of the NAWACap system has multiple advantages. Since it can be charged in seconds by regenerative braking (preferably) or the Li-ion battery (or both), it’s pretty much always ready to give a power boost when physics puts the largest load on the battery: From a stop or during hard acceleration. NAWA claims the racer can go 0-60 in about three seconds with a top speed of about 100 miles an hour. The Racer’s motor puts out about 100 horsepower, and NAWA says that since the supercapacitor system cuts down on needed battery capacity, the Racer weighs in at about 330 pounds – far lighter than some current electric motorcycles like the Zero SR/F, which tips the scales at 485 pounds with a 14.4kWh battery. That improved power-to-weight ratio also helps in performance metrics and improves handling.

Additionally, the NAWACap system extends the urban range of the Racer since the motor can be smaller, lighter and has to push less weight around. NAWA is claiming 186 miles of urban range, where the NAWACap system will be in its element, sucking up free electrons from the regenerative braking system in stop-and-go traffic. Highway range would be less, of course.

The Lamborghini Sián and the NAWA Racer are shining more light on both an ongoing problem and a potential elegant solution around the limitations of lithium-ion batteries, which currently power pretty much every electric car, hybrid, electric motorcycle, ebike and cell phone in the world. The problem? Lithium-ion batteries, wondrous as they are, take a relatively long time to charge. Also, they are not able to dump power into a drivetrain at a very high rate – unless you can pile a literal ton of them into your vehicle, as Tesla and others have done, but which you cannot do with a weight-sensitive machine like a motorcycle. Also, batteries can catch fire if severely damaged, and their lifespan is limited. Capacitors, which have been around for about as long as electricity, have none of those problems – but there’s a reason we don’t use them as long-term energy storage devices just yet: They are not able to hold a charge over long periods of time like a battery, and they currently have low energy density compared to most batteries. If those issues could be solved, they would touch on the holy grail of battery technology: The Solid State Battery.

To put this in perspective, consider that if a Tesla used supercapacitors (or a solid state battery) instead of a lithium-ion battery pack, you could likely charge it in a fraction of the time it now takes to fill a traditional car with gas. As in: A minute or so. Additionally, an array of supercapacitors would also be able to pump huge amounts of energy into a vehicle’s drive system, resulting in incredible acceleration even beyond the feats of Ludicrous Mode and so on. But again, because they cannot hold a charge for long and have low energy density, they are not yet practical for uses as a primary energy storage system. NAWA’s solution with the Racer? The battery/supercapacitor hybrid.

Just like battery technology, capacitor tech isn’t standing still either. Work is ongoing on making supercapacitors even more super by lengthening the time they can hold a charge and otherwise improving every other aspect of their performance. While powering vehicles with supercapacitors was once something talked about on the fringes of EV R&D forums, the tech is now heading mainstream, and we should expect to see more vehicles with ever better supercapacitors in the near future. For now, all we can do is hope some OEM slips a check under the door at NAWA Technologies and brings something like the Racer to market sooner than later.

If you’re going to be in Las Vegas for CES 2020, check out the NAWA Racer at their booth in Eureka Park.