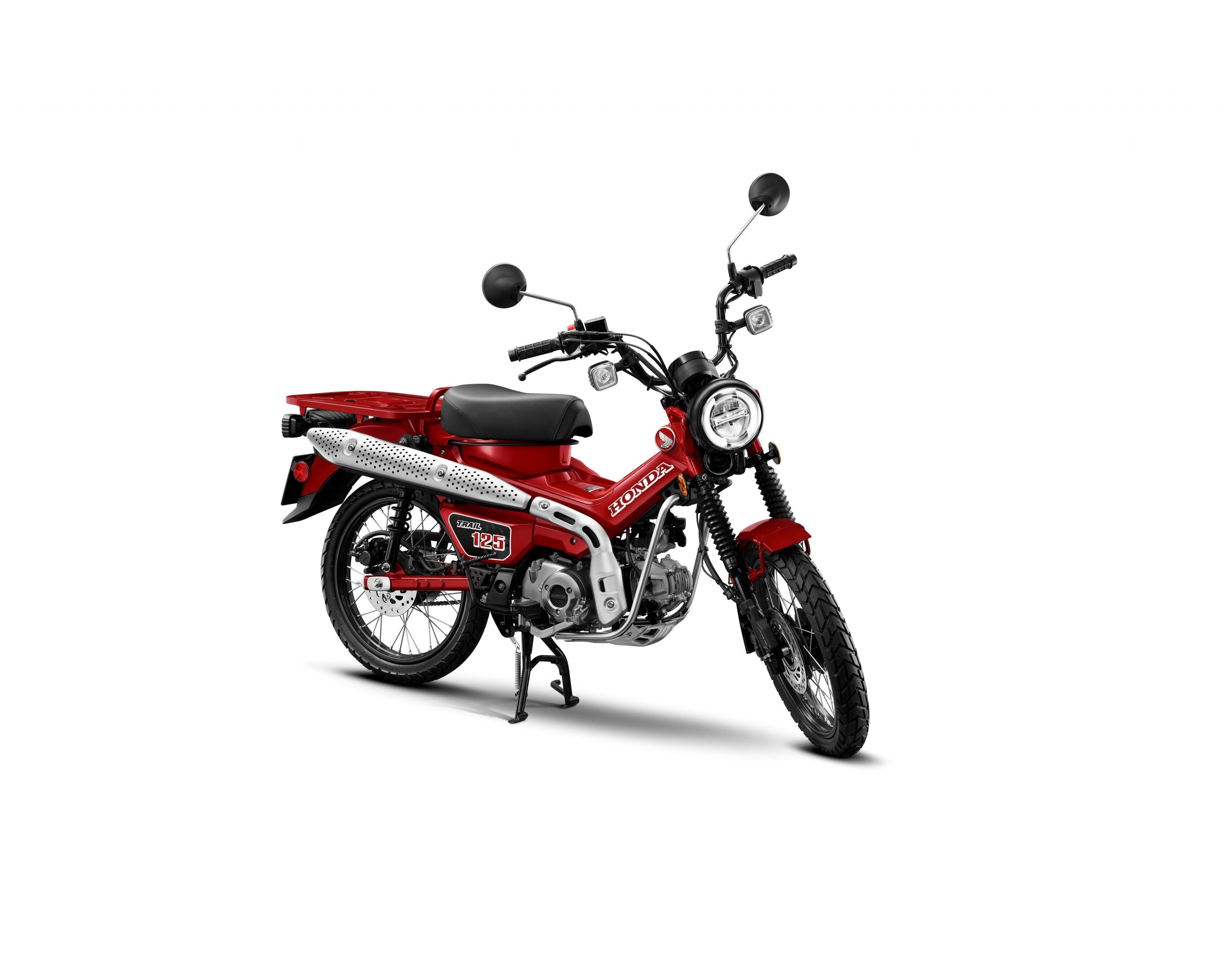 It’s ready for adventures, big and small. Two years after Honda showed this bike as a concept in Tokyo, the Trail 125 ABS joins the Super Cub, Monkey, and Grom for the 2021 model year with a rugged construction, plenty of ground clearance, and a no-clutch transmission.

Priced at $3,899 excluding $190 for the destination charge, the CT125 is offered exclusively in Glowing Red with black garnish and old-school decals. The design harks back to the Trail 90 from more than half a century ago, and just like the original, this mini motorcycle is a blast to ride in the urban jungle as well as on more engaging roads.

Tipping the scales at 259 pounds including fluids and 1.4 gallons of gasoline, the four-stroke bike relies on a two-valve engine and four speeds for the semi-automatic transmission. The front and rear suspension promise 3.9 and 3.4 inches of travel (99 and 86 millimeters), and both wheels measure 80/90 by 17 inches just like the Super Cub C125 ABS.

The high-mounted air intake and upswept exhaust system enhance low-end and midrange torque, and on full song, you can expect 8.7 horsepower and 8.11 pound-feet of torque. Tree stumps and rocks shouldn’t pose a problem to the engine guard, and the lack of a radiator is means that we’re dealing with an air-cooled motor that’s relatively easy to service.

“The Trail 50 became ubiquitous in American campgrounds and on motorhome bumpers in the ’60s and ’70s and led to a number of successors,” declared Lee Edmunds, senior manager of Powersports Marketing. “For that reason, the CT brand has a special history with the U.S. market, and it’s great to see it return with the Trail 125 which, like the Super Cub and Monkey, harkens back to a golden era of American motorcycling.”

Zero accessories are available at the time of reporting, and the same can be said about optional extras and trim levels. The ABS in Trail 125 ABS stands for anti-lock braking system, and as expected of a budget bike, only the front wheel is treated to this safety feature.

Dude Will Travel 37,000 Miles Around The World On A Honda Monkey 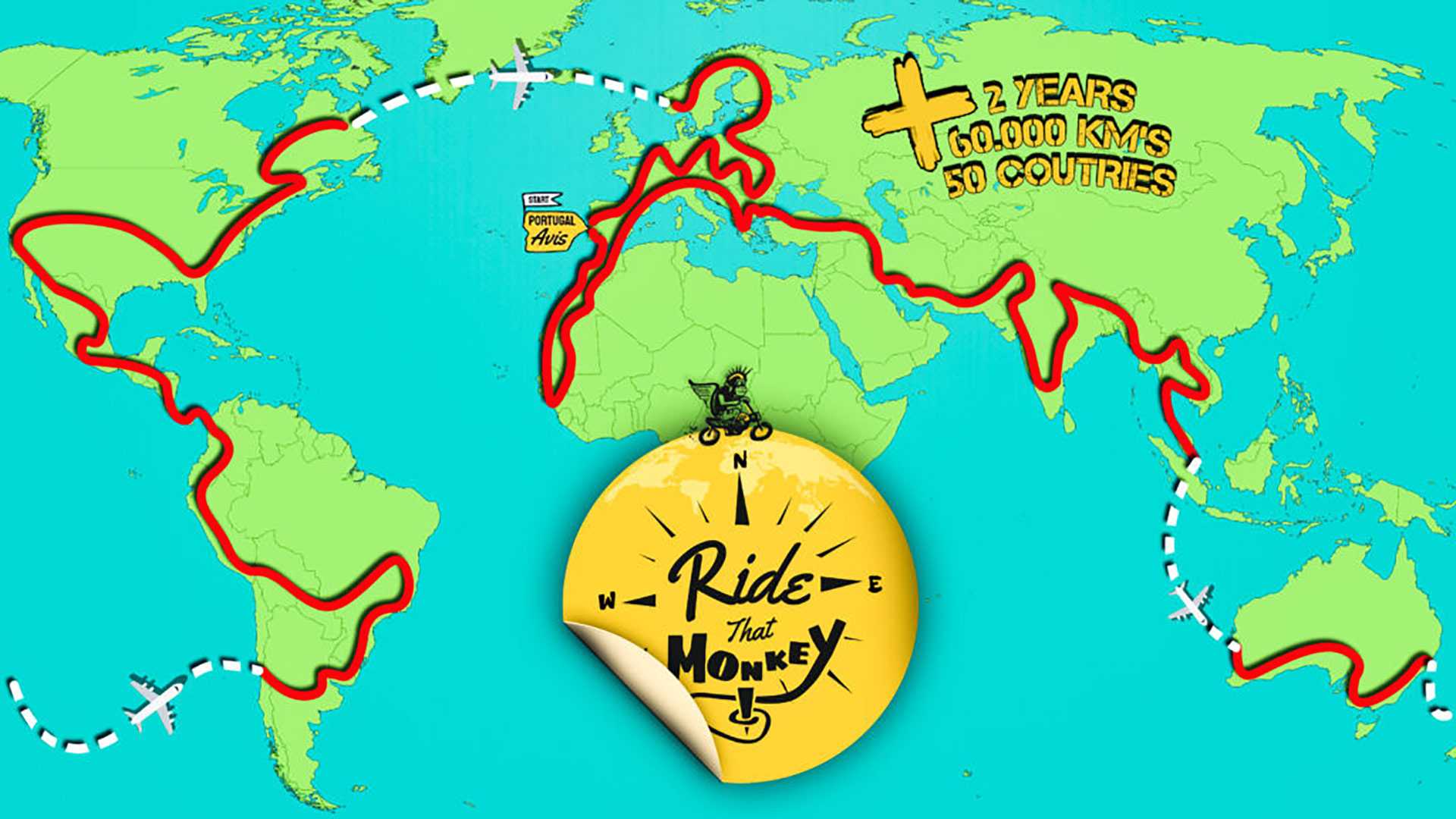 A little for the InstaFame, a lot for the World Record.

We hear of people dropping their old, boring “eat, work, sleep” life to answer the call of motorcycle adventure almost every week. Chances are you probably know someone who’s made the jump. Whether it’s for personal motives or to seek a bit of online recognition, the nomadic lifestyle on two wheels is a surging trend that shows no signs of slowing down.

For Portuguese rider André Sousa, the purpose of his ride around the world is to set a world record. Another one. See, the 24-year-old set the 2018 World Record for the fastest trip around South America on a small bike, according to the International Book of Records. This time around, Sousa’s ambitions have gone from continental to global.

On July 12, 2020, Sousa set off on yet another adventure in the hopes of adding another world record to his collection by becoming the first rider to circumvent the world on a small bike. This time, the trip will take two years and take him on a 37,000-mile journey across 50 countries. What about the small bike? Sousa opted for one of the smallest, more reliable, and rugged models available on the market: the Honda Monkey.

His mini moto was slightly supped up for the occasion to increase its capability thanks to a new exhaust, and additional lighting pods that come in handy when he’s stuck navigating unfamiliar terrains in the dark. In addition to a few minor tweaks, the bike is also fully-loaded with all the gear, bells, and whistles such a trip requires. This isn’t a glamorous gourmet Instagram trip and Sousa doesn’t plan to stop at fancy restaurants and hotels along the way so he needs a fair bit of gear.

Thankfully, it looks like he’s taken advantage of every motorcycle packing solution in the book and then some. The bags are comically almost as big as the bike itself. You can follow his adventure on the Ride That Monkey website and social media accounts if you’re curious to know how the Monkey holds up. God speed, André, make us proud. 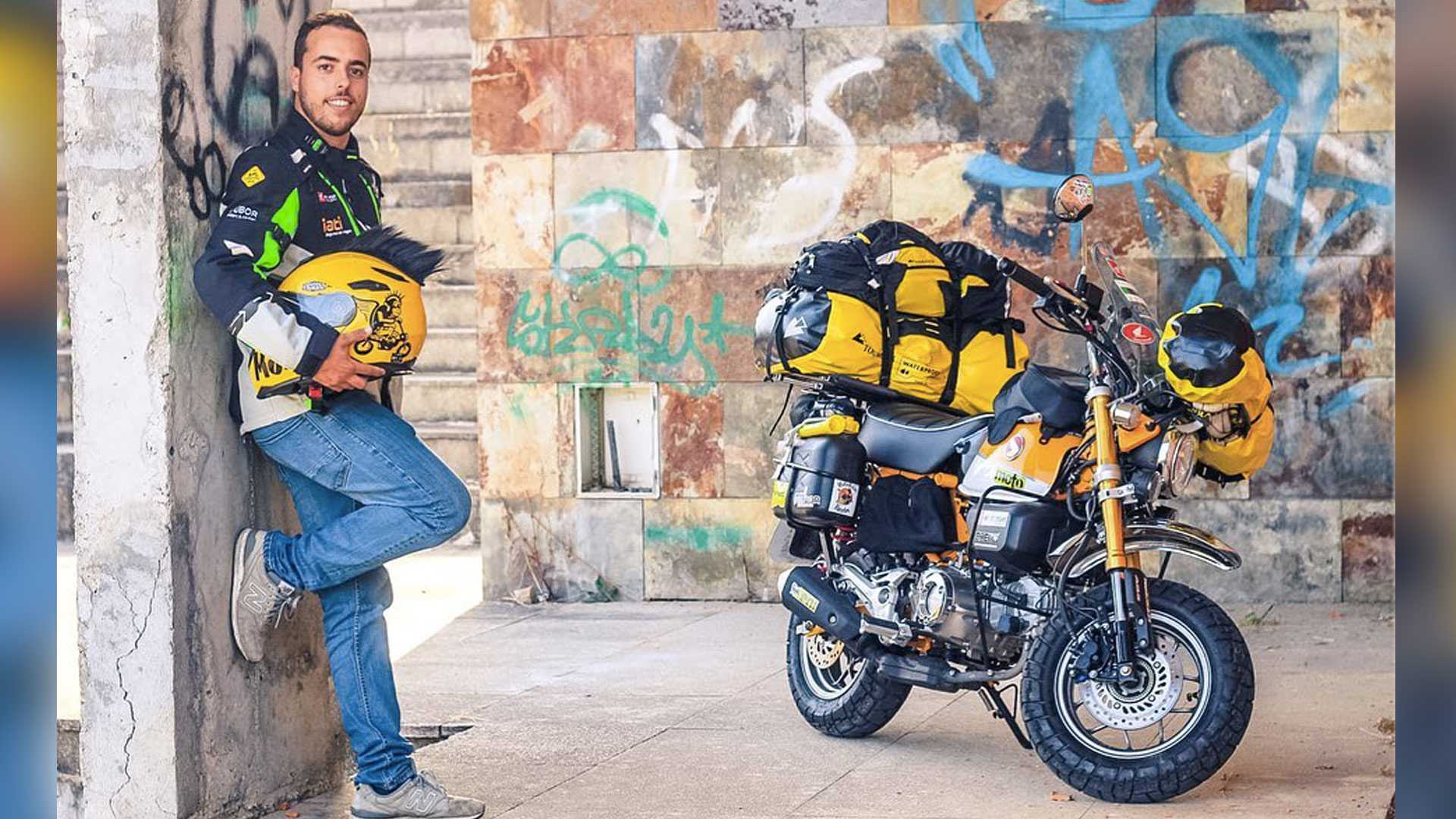