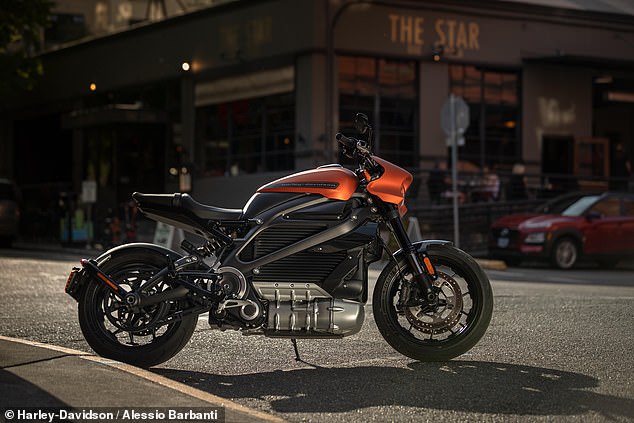 In an email sent to dealers last week, the company announced it had found a ‘non-standard condition’ in its final quality checks but didn’t elaborate further.

The LiveWire was officially announced for commercial release last fall with a planned price of $29,799.

‘We recently discovered a non-standard condition during a final quality check; stopped production and deliveries; and began additional testing and analysis, which is progressing well,’ the company said in a statement.

The Wall Street Journal reported that the decision came after a problem with the vehicle’s battery charging was discovered. The manufacturer did not say when they planned to resume production.

The company had already begun delivering models of LiveWire to dealers in September.

The company had expected to ship around 1,600 bikes, or an estimated 1 percent of the company’s total big shipments.

The LiveWire is said to go from 0-60 mph in three seconds and reach top speeds of 110 mph.

Harley-Davidson recommends users go to dealers to charge the vehicle rather than trying to use standard electrical outlets in their homes.

It is powered by a 15.5 kWh battery and has a 105 horsepower magnetic engine and a range of 146 miles city driving on a single charge.

Harley-Davidson had told potential customers to charge the bike only at registered dealers and not in their homes.

The bike was first shown in The Avengers: Age of Ultron as a sleek prototype ridden by Scarlett Johansson’s Black Widow character.

The LiveWire promised a slew of advanced technical features, including what PR Manager Paul James descried as ‘twist-and-go.’

The LiveWire’s battery is said to have a range of 146 miles of city driving.

‘There’s no transmission, there are no shifters, no clutch – it’s very easy to ride.’

LiveWire is equipped with a full suite of electronic lateral aids, with a slew of sensors and programmable touch controls.

It also has cellular connectivity, making it the first mass market motorcycle in North America with the capability.

This means it can alert the owner if the bike has been tampered with or moved. It also has built-in GPS for location tracking.

As for the sound, Harley says its electric powertrain will produce a ‘new signature Harley-Davidson sound,’ with minimal vibration, heat, and noise.

The ‘twist-and-go’ bike ditches the traditional shifters and chirps out a turbine-like whir in lieu of the characteristic rumble. The company is hoping this will usher in a ‘new signature Harley-Davidson sound,’ with minimal vibration, heat, and noise.

LiveWire will also launch in Canada and most of Europe later this year, Harley-Davidson says.

Harley Davidson (HOG) has been having a rough last couple of years, with its current stock price nearly half of where it was in 2018 as it fell from around $50 per share to its current price of about $35 per share. The company is an American icon, with the Milwaukee-based motorcycle maker being founded more than 100 years ago, and conjures up a certain type of imagery – that of big bikes, loud engines and groups of somewhat older riders riding together in large groups.

This level of brand loyalty and, dare I say, cult following has been a cornerstone of Harley Davidson’s strategy for years. However, Harley Davidson’s sales have begun to slump in recent years after reaching a high in 2014 with this trend set to continue in 2019. In Q2 2019, the company delivered nearly 69,000 bikes for the quarter, down 5% compared to the same period a year earlier and overall sales fell 6% to $1.4 billion.

The brand loyalty that Harley Davidson has cultivated has become its weakness as its core demographic of rider’s ages the company struggles to attract the new millennial rider and re-align its brand messaging to match what that segment is looking for.

UBS conducted a survey of more than 2,000 people between the age of 21 and 34 in an attempt to figure out why Harley-Davidson stock has fallen 32% in the past 12 months. While their findings are bad news for big expensive cruisers and touring bikes, they are actually good for other parts of the industry. Unlike older buyers who considered a bike “as a hobby” or because “motorcycles are cool” Millennial responders want them for “ease of transportation.” Young buyers are interested in practical and affordable bikes, for now, partially because many of them don’t have a lot of money. There is no telling if hooking Millennial customers now with affordable and practical might lead to selling them a big touring bike when they are older and have more time and money. Among the young target demographic, the second most common reason listed for buying a bike was “it goes with their self image” so the important thing might be to not try to sell them their dad’s motorcycle.

Harley will have difficulty attracting the millennial audience

I struggle to see how 10 years from now a millennial who would have values such as being more frugal, more minimalistic and more environmentally conscious would not opt for a sleek, sporty high-tech Ducati and go for a big, loud, chrome-plated Harley Davidson. Therefore, it makes sense that Harley Davidson would try to shift its brand away from this older image and embrace something more modern. And the fact is, the company is well aware of that. On July 30, 2018, the Company disclosed its “More Roads to Harley-Davidson” plan to accelerate the Company’s strategy to build the next generation of riders globally. Under the plan, the Company intends to introduce new products including electric motorcycles, a new middle-weight platform of motorcycles that includes adventure touring, custom and streetfighter models with engine displacements ranging from 500cc’s to 1250cc’s; and smaller displacement motorcycles for emerging markets. The Company plans to introduce these new motorcycles between 2019 and 2022, starting with a new electric motorcycle, LiveWire, in the second half of 2019.

These plans are hitting a bit of a snag, as the company is seeing soft demand for its Livewire electric vehicles. These electric motorcycles, which are aimed at millennial customers and billed as a way to attract a new generation of riders, come with a sticker price of $30,000 nearly as much as a Tesla model 3. It’s as if the company ignored the main necessary selling points (i.e. “practical” and “affordable”) for this demographic. Harley Davidson does make some decent, affordable bikes in their Street lineup. But they still have that stigma, of being expensive toys. In the sub-$10,000 motorcycle market, Harley can’t compete in terms of bang-for-the-buck with the likes of Triumph, Ducati, and the Japanese big four that’s been cashing in on cheap Harley alternatives since the 1980s.

Harley to face stiff competition in the emerging markets

Harley Davidson’s other area for potential growth is through expanding in emerging markets, particularly China and India. The company announced a collaboration with Qianjiang Motorcycle Company Limited (“Qianjiang”) to launch a smaller, more accessible Harley-Davidson motorcycle for sale in Harley-Davidson dealerships in China by the end of 2020. Motorcycles have been a presence in Asia for years with brands like Honda and Yamaha, along with local country-specific brands, dominating the sale of smaller vehicles.

Given these considerations, in my view for Asian customers the main selling point of these motorcycles would be affordability and reliability as the next “tier” in terms of status symbols would be purchasing a car. The way I see it, Harley Davidson’s Asian motorcycles will slot in a premium category as is typical with other Harley products. The question then becomes for the Asian customer who may not be as familiar with the Harley brand and who do not view motorcycle riding as a “hobby” is that will they be willing to pay for that premium.

Even more worryingly, the company is highly leveraged at 82 percent of total liabilities to total assets and with a debt to equity ratio of 4.62. Furthermore, a large portion of the company’s assets (nearly 70%) are finance receivables i.e. amounts owed by customers who have bought Harley Davidson motorcycles on finance. As we have seen in the experience of Kraft Heinz (KHC), a large amount of leverage would limit the flexibility of the company to make the necessary changes to its strategy. Given the headwinds the company faces due to declining sales and the need to change its strategy, I am quite bearish on Harley Davidson. The company is not trading at a large enough discount to warrant an investment.