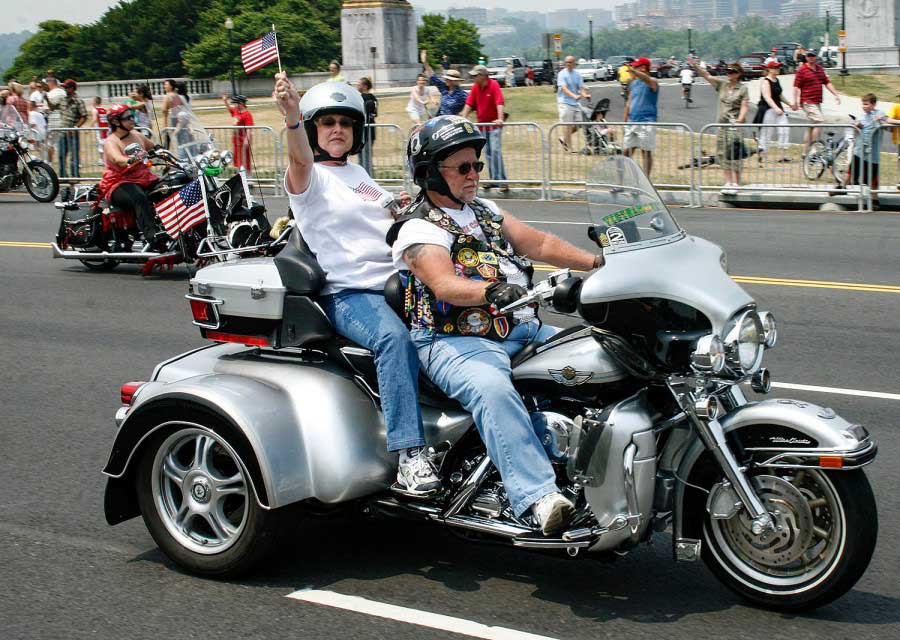 Organizers of the traditional Memorial Day motorcycle ride in the nation’s capital accused the Pentagon on Tuesday of jeopardizing the event.

AMVETS, the national veterans group organizing the ride, said the Defense Department has ignored its application to use the Pentagon parking lot as a staging area. For 32 consecutive years, thousands of motorcyclists gathered in the parking lot before and after the ride around the National Mall.

There are fewer than 40 days until the event, and the Pentagon hasn’t communicated its decision, said Joe Chenelly, national executive director of AMVETS.

The Pentagon “won’t even talk to us,” Chenelly said. “We’ve been trying to really be good partners in all of this and not blast the Pentagon, but we’ve gotten to point recently where we have to put the pressure on them.”

Chenelly said he submitted an application in July to use the Pentagon parking lot on May 30 this year. He was expecting to hear back by January, but no response came.

The Pentagon’s special events office sent Chenelly an approved permit earlier this month but then rescinded the approval eight days later and said they hadn’t made a final decision. At that time, Chenelly told the Pentagon he needed an answer by April 16.

“It’s April 20 today, and we still haven’t heard anything back,” Chenelly said Tuesday.

Pentagon spokeswoman Sue Gough told Stars and Stripes on Wednesday that “there’s been no decision yet.” She cited the ongoing coronavirus pandemic as the cause of the delay and said the department is monitoring community spread of the virus. Masks and social distancing are required on Pentagon grounds, she said.

“The permit request is still being evaluated in light of the ongoing COVID-19 pandemic,” Gough said.

Tens of thousands of motorcyclists are planning to travel to Washington for a Memorial Day ride, regardless of whether they have a place to gather, Chenelly said. He’s working with the mayor’s office on another plan to host riders in the parking lot of Robert F. Kennedy Memorial Stadium.

The stadium, in the city’s northeast quadrant, is much farther from the National Mall than the Pentagon. Hosting riders there would require the city to shut down a busy section of the Capitol Beltway, an interstate highway surrounding Washington, for about four hours, Chenelly said. AMVETS planned to meet Wednesday with city officials to discuss the plan.

In reaction to the news of the Pentagon not issuing a permit, riders have been posting online about traveling to Washington in large groups and shutting down highways themselves, Chenelly said. He worries about the potential safety risks that would pose.

“We could see chaos if it’s not coordinated,” Chenelly said. “So, we’re really concerned by that. We want a coordinated, safe, impactful demonstration where people can come, be seen and heard, and then leave.”

Earlier this month, Chenelly reached out to members of Congress for help persuading the Pentagon to approve the permit. On Tuesday, Rep. Brian Mast, R-Fla., sent a letter to Defense Secretary Lloyd Austin Austin, urging him to step in and allow AMVETS to use the Pentagon as a staging ground.

Mast also issued a public statement criticizing the Pentagon and President Joe Biden’s administration for interfering with the event.

“We are blessed beyond words to be citizens of the greatest country on Earth, and only live free thanks to the men and women who made the ultimate sacrifice,” Mast said. “But the Biden administration seems intent on restricting that freedom, and now, even restricting Memorial Day ceremonies.”

Rolling Thunder operated a motorcycle ride through Washington for 32 years before hosting its last event in 2019. AMVETS took over in 2020 and planned an event to replace the popular Rolling Thunder ride. It was designed to raise awareness for prisoners of war and troops still missing in action, as well as the issue of veteran suicide.

The event, now titled Rolling to Remember, was canceled last year because of the coronavirus pandemic. AMVETS has made efforts this year to reduce capacity, put space between riders and supply hand sanitizing stations, Chenelly said.