Custom LiveWire One Motorcycles Debut at Autopia 2099 in Los Angeles 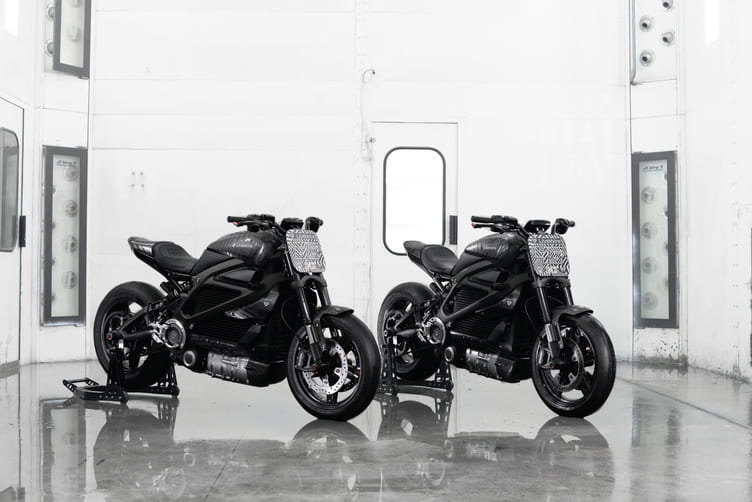 LOS ANGELES, CA (December 9, 2021) – The customization potential of the LiveWire One™ electric motorcycle was on full display on Saturday, Dec. 4 at Autopia 2099, a new and dedicated EV event held at Optimist Studios in Los Angeles designed to showcase electric cars, trucks, motorcycles, bicycles, and other mobility solutions. The event featured more than 80 vehicles, from home-built and conversion EVs to brand new cars and trucks, plus a display of what the event organizers called retrofuturism. Two custom motorcycle builders, SMCO and Earle Motors, presented the first fully customized LiveWire One motorcycles, both of which originated in Los Angeles, a city rapidly becoming LiveWire’s most successful market.

“The custom bikes showcased at Autopia make a big statement on behalf of LiveWire,” said Ryan Morrissey, Chief Electric Vehicle Officer. “Personalization has always been an element of motorcycle culture, and this weekend SMCO and Earle Motors demonstrated the customization potential of LiveWire One. These custom bikes and components are early indicators of our intent to incorporate limited edition builds and accessories into the digital bike builder on LiveWire.com.”

SMCO: LiveWire One Hooligan Racer
Brothers Aaron and Shaun Guardado started racing as young teenagers, first in shifter karts and then in high performance import cars before they turned their attention to motorcycles. They founded SMCO in 2010 to sell branded T-shirts and started building custom competition motorcycles in their Long Beach, Calif., shop to back up the brand and feed their appetite for racing and performance. Now in their mid-30s, the brothers have built serious Harley-Davidson flat trackers and performance bikes for hooligan racing, and even converted a pair of Harley-Davidson® Street Rod® motorcycles into snow bikes for a winter hill climb at the ESPN X Games.

“When we got our hands on the LiveWire One, we immediately wanted to race it,” said Aaron Guardado.

This past July, Shaun and Aaron entered a pair of LiveWire One bikes in the Roland Sands Super Hooligan Championship at the Laguna Seca race course in California. The series is open to almost any motorcycle, and for the event the bikes were stripped of lighting but were otherwise stock.

“The bikes are so fast and so much fun to ride, but we wanted to find ways to improve on that performance,” said Aaron. “We started by reducing rotating mass with a set of carbon fiber wheels from BST. Then we removed all the stock bodywork and used it to make molds for our own lightweight carbon fiber body pieces. We also designed our own rear-set foot controls to put us in a more-aggressive posture for road racing the bike.”

The SMCO race-prepped LiveWire One bikes were displayed this past weekend at Autopia in the unpainted carbon bodywork.

“This project really pushed us into some new technology,” said Aaron. “We learned to use CAD and a 3D printer to create the rear sets, for example.”

All of the carbon bodywork created by the Guardado brothers uses the stock mounting points on a LiveWire One, and if there’s interest from other owners, the parts may show up for sale in the future. 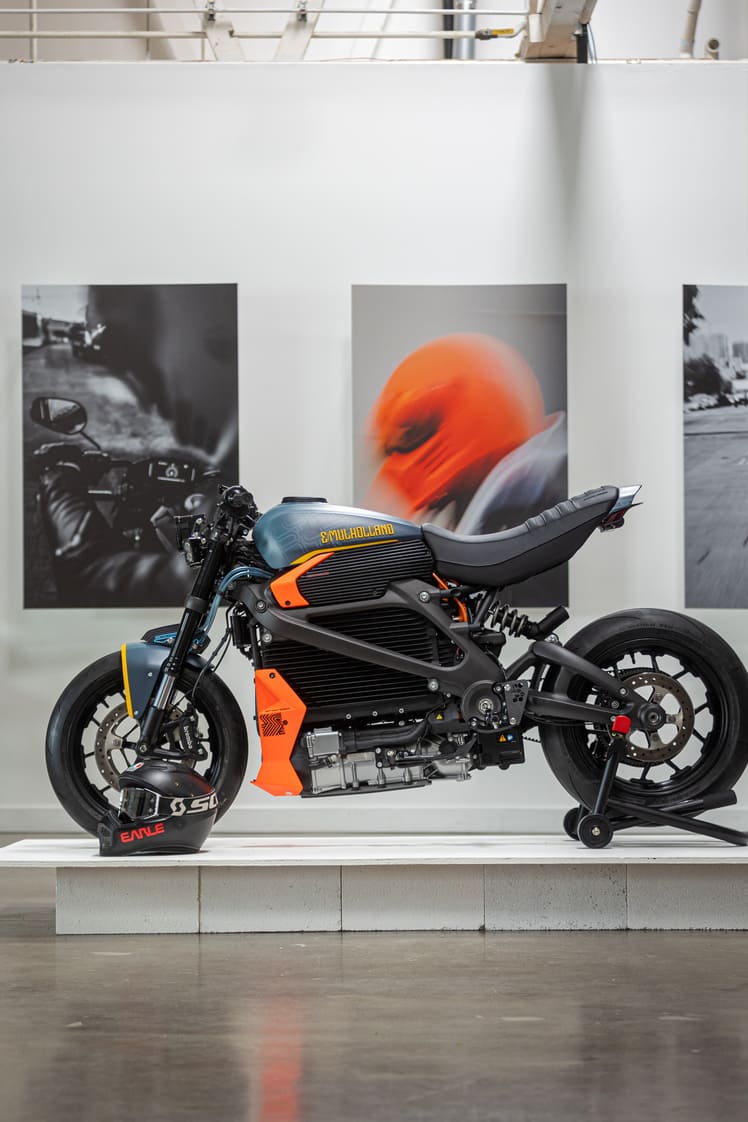 Earle Motors: E/MULHOLLAND CUSTOM
When designer Alex Earle needs to unwind, he often does it on his LiveWire One electric motorcycle.

“I’ve spent a lot of time riding off road, but I discovered the LiveWire One was the perfect stress-relief street ride,” said Earle, who teaches powersports design at the ArtCenter College of Design in Pasadena, Calif. “I live near the base of Mulholland Drive, a famous and very curvy road winding from Los Angeles up into the mountains. On weekends it’s nuts with cars and bikes, but on an evening during the week nobody is there. It’s like my private road. Unlike an internal combustion bike, the LiveWire One is quiet, and smooth, and cool. I can make a run up Mulholland, or Decker Canyon Road, stop at Old Place or the Rock Store. It’s a great escape.”

Earle Motors is more of an outlet for Earle’s creativity than it is a business, and he turned that creative design bent on his LiveWire One, in a very dramatic way.

“Initially this bike was intimidating, because it’s electric,” said Earle. “There’s no exhaust, for example, which is always an easy starting point for customization. And no fuel tank. I had two goals in mind – to consolidate the design and adjust the ergonomics for my own comfort. I want it to fit like a tailored suit.”

Earle replaced most of the bodywork with pieces of his own design, created in composite on a 3D printer, except for the “fuel tank” in front of the seat, which covers tightly packed electronics that can’t be reshaped. He removed the rear fender and lighting, and replaced the tail section with one he formed of welded steel.

“I painted the electronics cover, which looks like a fuel tank, in Synthetic Haze, a gray-to-blue fade developed during World War II to help airplanes appear less visible in the sky, which lowers the profile of the entire bike,” said Earle. “I filled in the space below that cover with a new finned piece that wraps around in front of the seat. The fins are the same shape as those on the battery case in the center of the bike.”

The part Earle removed incorporates air scoops to cool electronic components, and to replace that cooling capacity he created hollow galleries within the fins in which coolant might circulate. Two small hoses on the show bike would carry that coolant to a finned heat exchanger located between the forks. To create this part, Earle made detailed drawings, and had the entire motorcycle digitally scanned by Mimic 3D. His drawing and the scan was handed off to PROTOTYP3, a firm founded by two of his former students, who recreated it in CAD and then made the part in one piece with a 3D printer.

“It was amazing that when I got the part the holes lined up perfectly with the mounting points on the bike.” said Earle. “Right now, this is an idea, not a functional feature. I have no way of testing it, but I designed it so that I think it could be functional. The next step would be to 3D print it in aluminum.”

The lower bodywork behind the front wheel is shaped to be an air curtain to smooth flow around the battery case. Its bright orange color is meant to draw the eye down and lower the perceived profile of the bike. Earle removed the stock headlamp and its nacelle to fit three LED lights.

“The new tail section and a custom motard-style seat I designed raise the seat height several inches, which is perfect for my six-foot three-inch frame,” said Earle. “Saddlemen covered the seat in black leather, and it looks great. I also installed a chrome handlebar that’s lower than stock, chrome because it doesn’t get scuffed up when I transport the bike.”

A final custom detail can be found on a logo Earle created for a new charging port cover, which combines the number 23 – which he has always used on his competition-style customs – with an elk antler design that’s also used by the Old Place on Mulholland.

“Some of the inspiration for this project comes from my students, who show up in class with these computers they have built themselves, and they are liquid cooled,” said Earle. “People have been hot rodding motorcycles the same way for 70 years, but how will that happen in the future, when bikes are electric? How will this generation customize a bike? They can 3D print their own parts. They could liquid cool the electronics. I’m hoping this project gets on Instagram and some 17-year-old in Portugal sees it and gets a spark of inspiration. That will be the future of customization.”

About LiveWire
More than a motorcycle, LiveWire plans to redefine electric. Drawing on its DNA as an agile disruptor from the lineage of Harley-Davidson, capitalizing on a decade of learnings in the EV sector and the heritage of the most desirable motorcycle brand in the world. With an initial focus on the urban market, LiveWire will pioneer the electric motorcycle space, and beyond. With a dedicated focus on EV, LiveWire plans to develop the technology of the future and to invest in the capabilities needed to lead the transformation of motorcycling. LiveWire expects to benefit from Harley-Davidson’s engineering expertise, manufacturing footprint, supply chain infrastructure, and global logistics capabilities. Innovating by design and attracting industry-leading talent, LiveWire will be headquartered virtually, with initial hubs in Silicon Valley, CA (LiveWire Labs) and Milwaukee, WI.