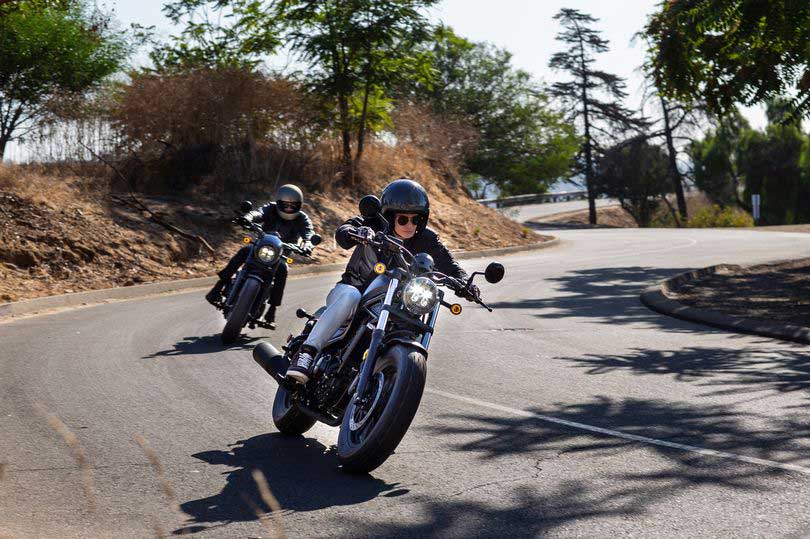 Rebels Without a Pause: Since Hondas rarely break down

The original looked a bit wimpish, but a macho makeover has made this cruiser version of the hugely popular CBR500 a nice alternative for bikers clutching their brand new A2 licences in their gloves

A Honda Rebel is a bit of an oxymoron, like Boris Johnson’s hair stylist or Vladimir Putin’s sense of humour.

You see, Hondas aren’t really bikes for rebels. They’re bikes for chaps and chapesses who want to get from A to B efficiently and safely on machines which never break down and have fewer vices than Audrey Hepburn in A Nun’s Story.

Even their Fireblade superbike has always been a pussycat to ride, although in the hands of 23-times TT winner John McGuinness, a pussycat with very sharp claws.

Their cars are the same, as I found doing a lap of Silverstone in a Civic R with British Touring Car champion Gordon Shedden.

I thought it was going to be terrifying, but he and the car were so fast and flawless that it was a hoot going around corners sideways at 100mph while he chatted about the weather.

It looked fabulous, but when MCN compared it to the Harley Rocker C, they said the Harley shook and rattled, and engaging first gear was like dropping a hammer in a bucket, but the Fury was too perfect, so they preferred the character of the Rocker.

You could just see the row of heartbroken designers at Honda HQ trudging out to the car park to commit seppuku.

So I rolled up at Belfast Honda on the Africa Twin with some doubts; particularly since when the Rebel came out in 2017 as a bobber cruiser version of the CBR500 which is hugely popular with bikers who’ve just got their lovely new A2 licence and are limited to 47bhp for a bit, it looked, well, a bit wimpish.

Bobbers, as those of you who have studied Dr Furtwangler’s A-Z of Motorcycles will know, were originally 1930s bikes with everything superfluous removed and the mudguards cut back or bobbed for a lean, mean, moody masculine look.

The original Rebel, though, looked about as masculine as Julian Clary in a frock.

All hail, then, to the chaps at Honda who’ve turned Julian into John Wayne, with a much more rugged appearance, not to mention new LED headlight and indicators and a slipper clutch to stop the back wheel locking during aggressive downshifting.

Climb aboard, and it’s still fairly compact for anyone over 6ft, although I was getting vertigo compared to the Monkey Bike I’d been on the week before, joining some lunatics riding them from Land’s End to John O’Groats for charity.

The mirrors are as useful as before, and the minimalist circular speedo now has, as well as the previous time, fuel gauge and mileage on the 2017 version, a gear indicator, a handy addition for newbies.

Start up, the air filled with a civilised purr, and I set off feeling suitably rebellious and looking for some grannies on scooters to beat up.

Progress is surprisingly perky, helped by the fact that the CBR500 engine has been tweaked to deliver maximum torque 500rpm lower. Peak power comes in 100rpm lower as well, not that you’d notice.

Like all Hondas, you can thrash the bulletproof engine to death without fear of disintegration, but the bike’s perky enough without needing to, and that civilised purr never becomes more than a civilised growl anyway.

Handling, with the bike weighing only 190kg fully fuelled and 16in wheels, is a hoot, allowing even new bikers to fling it around corners as if they’ve been riding all their lives, and the suspension damping is better than on the original model as well, leading to a surprisingly plush ride on a smallish budget bike.

There’s only one brake disc up front, but on a bike this light, that’s all you need, with nicely progressive bit and feel from the rear on the rare occasions you might need to go near it.

For an even meaner look, you can detach the pillion seat, which looks about as big and comfortable as a carefully folded napkin, and for another 400 quid, the Special Edition version has a quilted seat, flyscreen for a bit more wind protection at motorway speeds and black fork gaiters for extra moodiness.