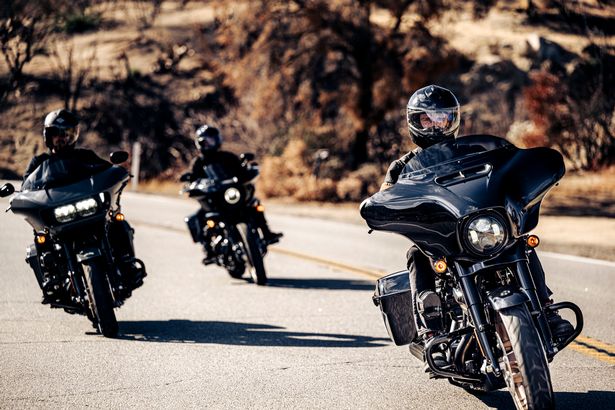 by Geoff Hill from https://www.mirror.co.uk/

Another icon of the American dream

It weighs as much as a small tank, goes like stink and handles very nicely for such a beast, so even though it costs more than an average UK hatchback, for Harley fans it’s a metal and rubber incarnation of their mythical aspirations

I was having a beer one night in Los Angeles in 2013 with the head of Triumph USA when we got to talking about Harleys.

He’d been sent to LA in advance of that year’s launch of the Thunderbird LT, an extremely capable cruiser which Triumph hoped would convince American riders that there was more than one type of bike in the world.

On his first weekend there, his Harley counterpart took him to an open day at Bartels, the city’s biggest Harley dealership, where hundreds of riders and their families were enjoying a free hog roast, burgers, raffles, gifts, music, beer or soft drinks and test rides.

“See? This is what you’re up against. It’s not just about the motorcycles,” said the Harley guy.

I was reminded of it in 2018, when I rode a Harley from Oxford to Prague for a three-day bash to celebrate the company’s 115 th anniversary to find 60,000 Harleys and 100,000 riders and partners, all with leather waistcoats, tattoos and chains, proclaiming their particular allegiances with patches saying Naples Military Chapter, Hanoi Chapter, Jeddah Chapter and so on.

It is, of course, all harmless fun – middle-aged men who during the week are Reg in Accounts, but at the weekends become Rebel Reg, King of the Road, riding west on his iron steed into the setting sun for a burger and beer with his sweetheart in a Route 66 diner.

And while non-Harley fans who have never ridden one wrongly condemn them as basic and agricultural ridden by chaps wearing chaps with tassels, no other motorcycle make in the world earns such astonishing passion and camaraderie.

And it’s not just from patriotic Yanks – there were Harley fans there from 75 countries, all of them walking, talking expressions of an infinite yearning for the innocence of an American dream which the rest of us may think blossomed into its fullest fruition in the Fifties, then died in the Sixties and Seventies after Kennedy and Vietnam, but which was still alive in the heart and soul of everyone walking around Prague on those sunny days.

On a slightly smaller scale, my biking buddy Gareth and I rode down on his Kawasaki Versys 650 and my BMW R 850 R to the recent open day at the local dealers. It’s called Belfast Harley, and it’s in Antrim. You need to be Irish to understand that.

We arrived to find the expected chapter members with their patches, leather and denim and tattoos, and a small woman looking slightly terrified as she tried to reverse her large Road Glide into a parking space.

“Help, I’m going to fall over!” she muttered. We strode manfully over to help, and she finished the job and got gratefully off.

“I’ve only had it two weeks. It’s very heavy, but I love it when it’s moving,” she said.

“Just don’t stop, then,” I said helpfully, and Gareth and I went inside to see Wilmer the boss about the two bikes we were going to take out for a test ride – Gareth the Pan America and me the new Street Glide ST. 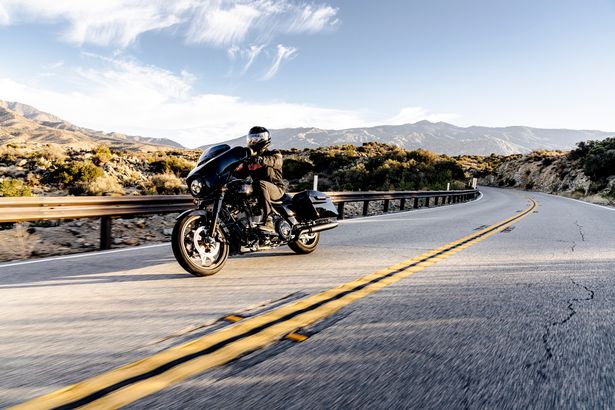 The ST is basically a standard Street Glide on steroids, with the 1868cc engine thrown in the bin and replaced by a 1923cc version, increasing the power and torque from 93bhp and 117 ft lb to 103bhp and 124 ft lb.

And, er, the price from a sharp-intake-of-breath £25,795 to a get-me-to-the-defribillator-on-time £27,795. No wonder Harleys are mostly sold on PCP. Still, they hold their value, so you get a good deal when you trade them in for a new one after three years.

The standard Glide is a beefy 375kg wet, and although the ST has shaved off 6kg to 369kg, that’s like a sumo wrestler claiming he’s gone on a diet by only having 10 chickens for lunch instead of 11.

I was just glad I wasn’t a small woman trying to reverse it as I trundled carefully out of the car park and opened the throttle.

Well, heavens to Betsy, that’s impressive. In spite of weighing the same as a small tank, it soared towards the horizon with surprisingly alacrity, helped by a bottomless well of creamy torque and a solid but precise gearbox which was light years away from the agricultural clank factories of Harleys of old.

With that weight on board, handling is never going to be quicksilver, but it’s agile enough for such a big beast, allowing you to dip and sway through A-road bends with happy precision, particularly as the Showa suspension is set firm for good handling, although at the expense of comfort on rough roads, as I found when it bottomed out on one bouncy stretch and left my spine an inch shorter.

The Brembo brakes haul it in so briskly and smoothly that, unlike most big Harleys, I didn’t need to call on the rear brake for assistance when steaming a bit hot into a corner.

As for the details, the mirrors are excellent, the traditional analogue dash is supplemented by a large TFT screen for the entertainment and comms systems, and the speakers in the fairings are pointless, like all speakers on all bikes anywhere.

The batwing fairing and sliver of screen, meanwhile, do a surprisingly good job of keeping the wind at bay, since I still have nightmares of a turbulent 90mph dash through France at night on a Harley with a batwing fairing while wearing an open-face helmet and shades.

So if you’ve got the dosh and like the whole Harley social thing, it’s significantly better than the standard Street Glide.

Oh, and Gareth loved the Pan America, so he got on the Versys and rode home to tell his wife that they’re selling the house, her mother, the dog and the camper van.

I haven’t heard from him since, so he’s probably buried in a shallow grave in the garden, and if anyone’s looking for a tidy used Versys, get your people to talk to my people about his wife’s people.

All Things Motorcycling ? All About Big V-Twins ? Have a look at www.Bikernet.com