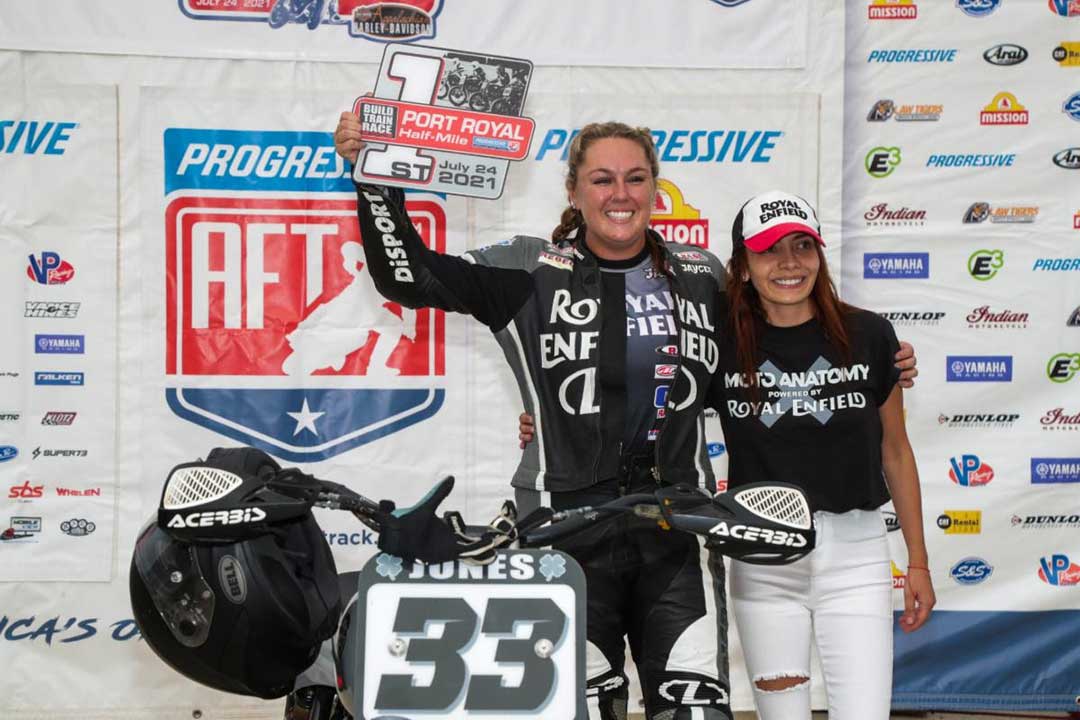 Milwaukee, WI (Monday, July 26, 2021) – On the heels of their historic win at Lima Half-Mile, Johnny Lewis and the Moto Anatomy X Royal Enfield Team were looking to start a hot streak aboard the Royal Enfield Twins FT at the inaugural Port Royal Half-Mile, round eight of the Progressive American Flat Track Championship at Port Royal Speedway in Port Royal, Pennsylvania. While the all-new venue held its share of challenges for Lewis, he and the Moto Anatomy X crew fought for every inch throughout the day, ultimately coming in fourth overall in the AFT Production Twins main event.

“Days like today remind me what a great crew we have,” said Johnny Lewis, “Today had its ups and downs but our Moto Anatomy crew never stopped working hard. It was a bit of a battle for us, but we had competitive lap times in the end; it just showed that our work throughout the day paid off. It was great to end tonight on a positive note.”

After a hard-fought battle with Dan Bromely for fourth in the main event, Lewis was able to edge him out by 0.007 seconds at the checkered flag—an incredible sight for the Port Royal fans. “Within the team, it was a success!” Lewis added.

“Johnny puts every ounce of himself into each race weekend and you could see it at Port Royal,” commented Breeann Poland, Marketing and Communications Lead – Royal Enfield Americas. “After battling some issues throughout the test and earlier in the day he was able to push through to a fourth-place finish today. We were proud to see this level of passion and dedication from the whole team.”

Port Royal Speedway was host to the second round of the Royal Enfield BUILD TRAIN RACE (BTR) Flat Track program, and the ladies of AFT thrilled the Pennsylvania crowd with some great battles. In the end, Jaycee Jones beat Jillian Deschenes to the checkers for the overall win. Lanakila MacNaughton was holding third, but made a mistake on the final lap, opening the door for Sarah Dixon to nab the final podium spot.

The Port Royal weekend got out to a great start for the ladies of AFT on Friday when they were invited to participate in the test on Friday, allowing for extra track time and eight rounds of practice. “Extremely happy we got practice Friday,” said Jaycee Jones. “If we didn’t have that day to figure out the track and make changes to the bike it could have been completely different.”

Jones was able to dial in her new Ohlins rear shocks, that she credits with making “all the difference in the world.” Jones not only captured her first win of the season, but set a scorching lap of 27.939—a time that could have potentially qualified her for the Production Twins class.

Jones and Deschenes are now battling for the BTR championship with one win apiece. Sarah Dixon, with a pair of thirds, is looking to break through for a win, while the talented field of builders and racers is also hungry for podium finishes in the 2021 championship.

“It’s been over a month since the ladies first raced in Chicago and we were eager to see them back at it again,” said Breeann Poland. “The racing between the women is definitely heating up. I am proud of each and everyone of them for pushing themselves both on and off the track. Lana missed the test on Friday and was at a disadvantage all day but when the green flagged dropped she put everything she had into it and battled for a podium spot.”

Johnny Lewis and the Moto Anatomy X Royal Enfield team will be back in action at Weedsport, New York for the Short Track doubleheader on August 13-14. They will be once again joined by the women of Royal Enfield BTR as the American Flat Track Championship makes its return to New York.