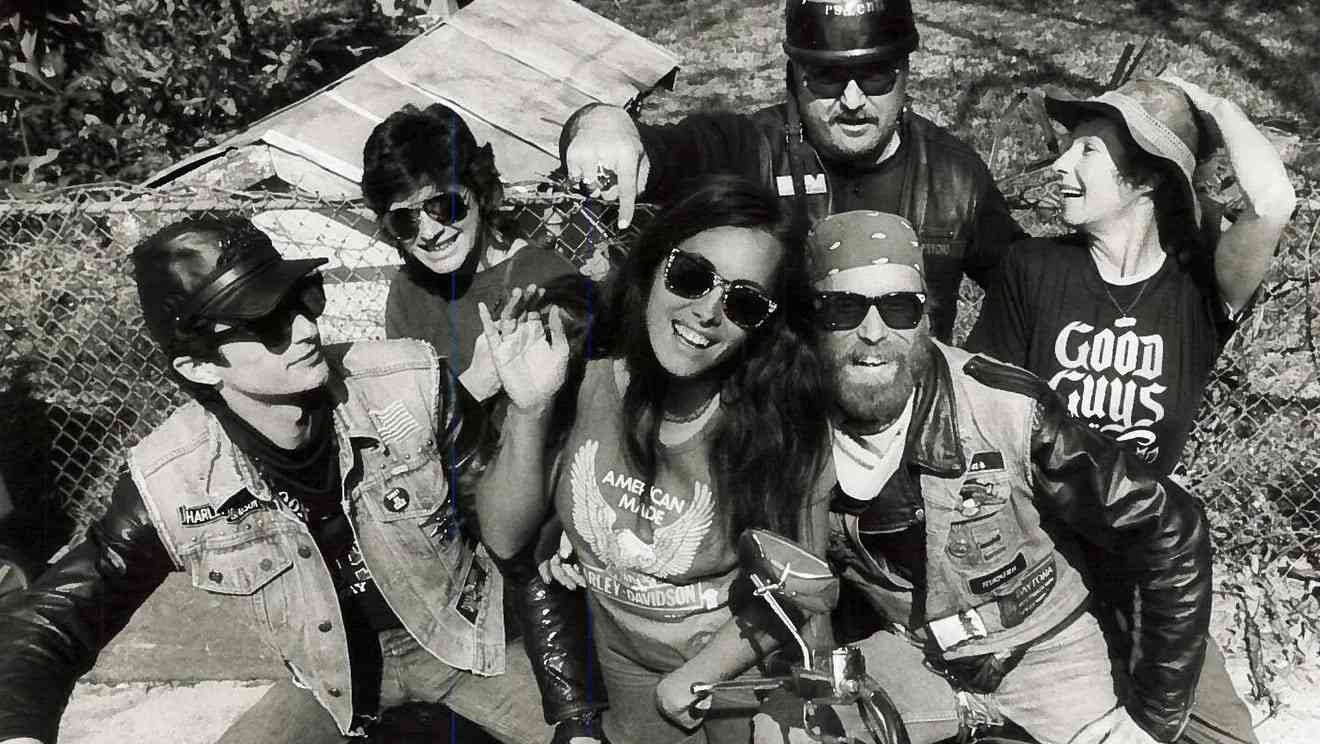 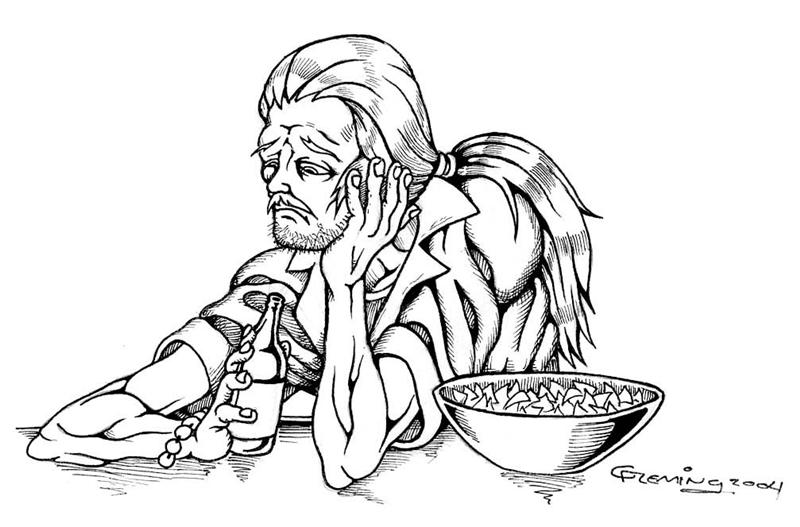 by K.Randall Ball with illustrations by Jon Towle and George Fleming

The Cantina bustled and Bandit kept the holiday tunes blasting while he stared at his budget sheet. It didn’t look good. The positive cash flow from the Sturgis Rally dwindled. He knew his time in Los Angeles waned and 2022 would be a turning point.

He put on a smiling Xmas face and walked down the stairs to the dining room. Most huddled together over their presents. Brothers discussed bike modifications and upcoming projects.

Marko came out from behind bar and nudged Bandit. “Looking good?” Marko said and then steered Bandit’s gaze to Clay, his thinning head of sandy-blonde hair resting against the polish bar top.

Clay was a too-regular. He started drinking early and didn’t stop. His poison Corona beers held him in place between piss and smoke breaks.

A friendly, helpful sort he wanted to assist folks and started to rebuild outboard motors and handled dinghy repairs. Never said a bad thing about anyone.

If you sign up for a two-year Cantina Membership, you will receive a signed book and lotsa swag from the crew. 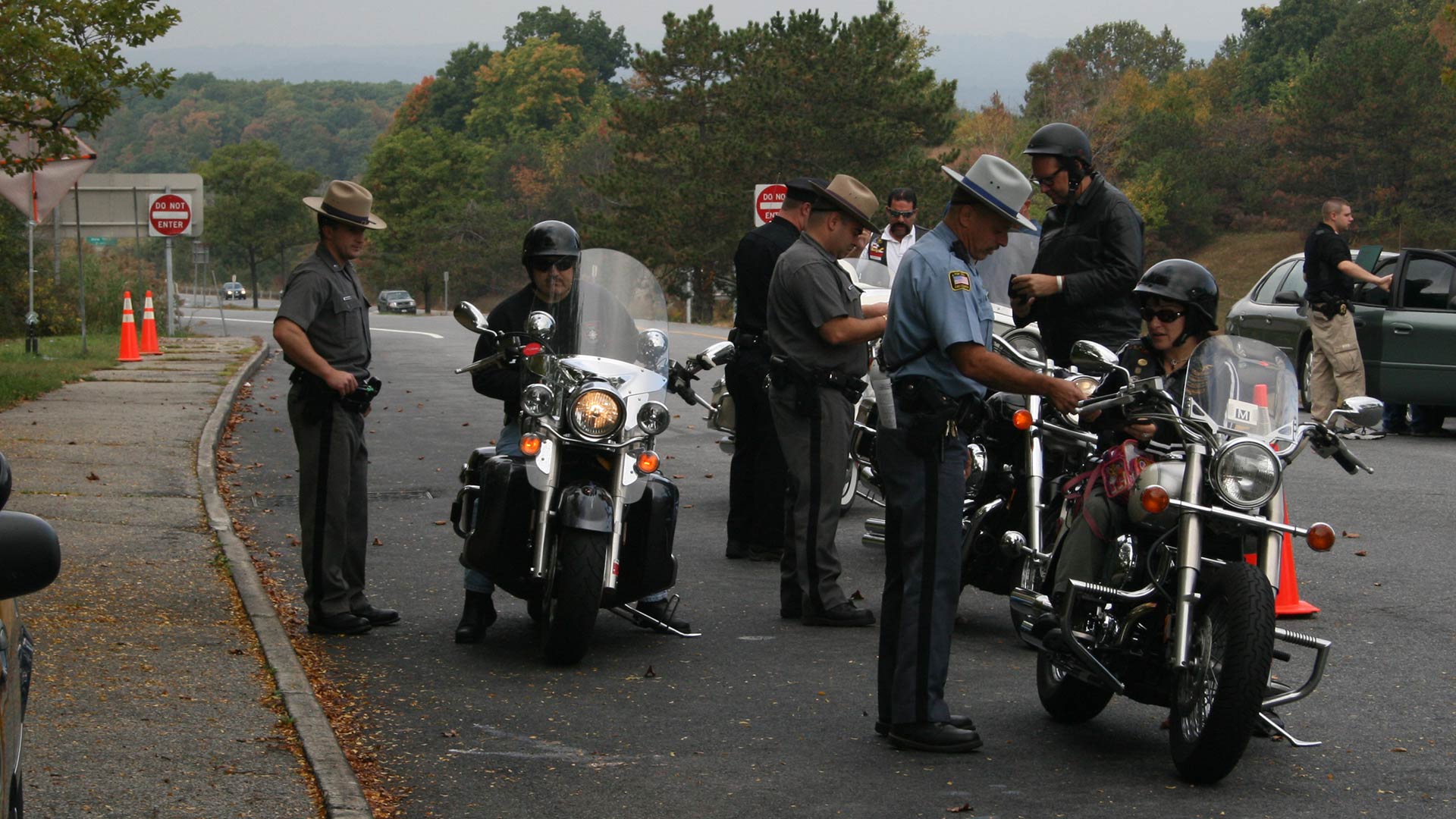 Motorist rights cases have made news and even history recently. There have been so many as of late, we are dedicating two separate newsletters to provide some insight on the legal rulings that are affecting drivers around the country.

TheNewspaper.com, featured prominently in these two newsletters, is a great supplement to the NMA’s Motorists.org site for the latest news and opinions on the politics of driving.

The US Supreme Court (SCOTUS)

Last week’s unanimous decision that curtails excessive government fines and property seizures has provided further impetus for one of the NMA’s primary lobbying initiatives: civil asset forfeiture (CAF) reform. The decision received broad bipartisan praise. Justice Ruth Bader Ginsburg wrote in the ruling that the excessive fines clause is a fundamental restriction that applies to the states under the due process clause of the Fourteenth Amendment. While the SCOTUS decision is monumental, the fight is far from over. Some states still allow the seizure of property from citizens — motorists are prime targets — who have never been charged with a crime. Our work for reform at the federal and state levels continues in earnest.

Additionally, SCOTUS accepted a case in January that will decide whether an unconscious drunk person has given implied consent for a blood draw to determine alcohol level. The case might resolve an important constitutional question: Can state legislatures obviate the warrant requirement by “deeming” that citizens can consent to Fourth Amendment searches without explicitly expressing that consent?

Judges for the Fifth Circuit Court of Appeals ruled in late January that a person driving a registered vehicle on a public road is not “reasonably suspicious.” Federal authorities appealed a motion to suppress evidence obtained from a border patrol traffic stop in Freer, Texas. The driver turned onto a public road that happened to bypass a checkpoint 50 miles inland from the Mexican border. The U.S. government has declared anything within 100 miles to be under Border Patrol jurisdiction. The Court ruled that turning onto a road that is “known” for smuggling in a truck registered to an individual is not enough to support reasonable suspicion. If it were, then virtually anyone driving within 100 miles from the border could automatically be deemed suspicious.

In December, judges in the Eighth Circuit US Court of Appeals ruled that it is appropriate for officers to use force to ram a driver with an expired registration sticker off the road. The driver sued the Arkansas state trooper for using excessive force and a US District Judge agreed with the plaintiff that the officer was out of line. She felt that at the time the trooper turned on his lights to make the stop, she could not reasonably do so on the shoulder which was unlit, dark and narrow. She continued to drive 20 mph under the speed limit for 42 seconds to find a safer spot, but after she passed an exit the trooper used a precision immobilization technique (PIT) maneuver to push her vehicle into a ditch. She and her young daughter were both injured. The Appeals Court sent the case back to the same district judge who now must determine if the lawsuit can proceed on the basis of malicious intent.

In early February, the Ninth US Circuit Court of Appeals ruled that police do not need a reason to place American citizens on a ‘Suspicious Person’ list. Judge Milan Smith wrote, “Tips and leads required only ‘mere suspicion,’ a lower standard than the reasonable suspicion required for criminal intelligence data and is up to the discretion of law enforcement and other government officials. This case is chilling in the sense that the government can put anyone on the list for not much more than a whim.

The Ninth Circuit US Court of Appeals ruled in January that police cannot demand ID from car or truck passengers without a reasonable suspicion of a crime. The judges agreed that in this Arizona case, the US Supreme Court ruling in Rodriquez v. US, which prohibits police from prolonging a traffic stop by asking unrelated questions, established precedent.

In January, the Eleventh Circuit US Court of Appeals upheld a traffic stop over a fast blinker. Apparently, driving with a turn signal that flashes “too fast” is potentially a criminal act in Georgia. The blinker was actually working properly; the Georgia Code does not stipulate how fast a turn signal should blink, only that all equipment be kept in “good working condition.” The appellate panel suggested that the plaintiff’s blinker was not in compliance because it was in working condition, just not “good” working condition. American jurisprudence at its best.

Check out Part 2 next week when we showcase recent state cases that could impact motorists.

The National Motorists Association is a membership-based organization dedicated to protecting the rights of the motoring public.