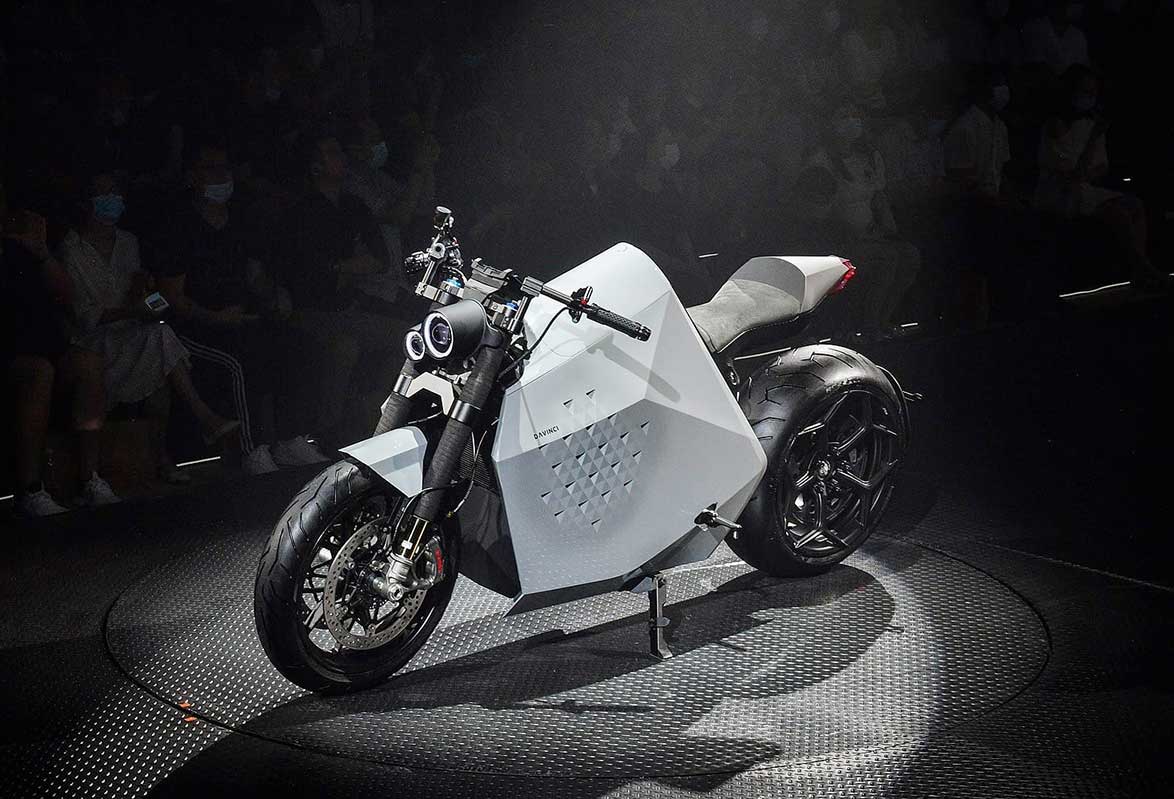 The motorcycle of tomorrow is, according to makers Davinci Dynamics, the DC100, or its fancier, more expensive version, the limited-edition, hand-crafted masterpiece DC Classic. Introduced this week in Beijing (hat tip to New Atlas), it is said to be the culmination of seven years of hard work, the first step toward the electric two-wheel revolution that the world has been hoping for but is yet to fully witness.

Big words for an equally big moment, but you don’t get the chance to stand out from everyone else if you don’t show cojones, figuratively speaking. Hopefully, Davinci Dynamics can back up the impressive claims with a futuristic cafe racer to match, because, on paper, the DC100 sounds like a dream. It’s more than just an electric motorcycle, the company says: it’s a two-wheeled robot disguised as an elegant, futuristic, electric cafe racer.

The DC100 rides on a monocoque aluminum alloy chassis. It has a single-sided swingarm and a cover for the giant lithium 17.7kWh battery pack that gives it a boxy but still streamlined appearance. It rides on Pirelli Diablo Rosso III tires, and it’s painted in muted gray or bright orange, making it feel as if it belongs in a video game of some sorts.

The DC100 is also very smart, using technology for smoother and more intuitive, longer, and safer rides. It’s packed with sensors that collect and track information, says Davinci, with the ultimate goal of maximized efficiency and comfort, so you can truly enjoy your ride.

Features include Hill-start Assist Control (HAC), regen braking and improved balancing on descent, reverse assist (which allows you to back out of a spot on torque, even on an incline), traction control, and combined braking for maximized stopping power. In Drive mode, if you release the brake, the motorcycle “creeps forward slowly” at 3 mph (5 kph) to ensure a “smooth” start.

But the most intriguing features are listed as “to come:” self-balancing capabilities, target recognition, and remote control. Davinci promises that the DC100 “will be able to balance itself” and “to automatically follow a target,” hence the promise that it could become your “jogging companion.” The idea, one assumes, is that it won’t ever go any faster than in the creep mode mentioned above, at 3 mph (5 kph). Not that you should ever go out jogging with your bike, as if you’d have your dog tag along.

Remote control will also be offered as an OTA update, through the Davinci App. Though the press materials released so far show the bike with a display, the Davinci website and the press release that went out this week note that, even in this stage, your “phone is the key, and your display.” This means that riders have to use the Davinci App for settings and stats, and their phone to visualize them, including speed. They would also use this method for remote control, when and if it becomes available – maybe even to summon their bike to them in the way drivers do their Teslas today.

As noted above, Davinci is offering two models of this two-wheeled robot that poses as an electric motorcycle: the DC100 and the DC Classic. Spec-wise, the only difference between the two is that the latter will be limited to just 50 units worldwide and will come with a hand-crafted, hand-assembled and custom-tailored body that stands out for the “striking minimalist aesthetics,” each carrying an ID number.