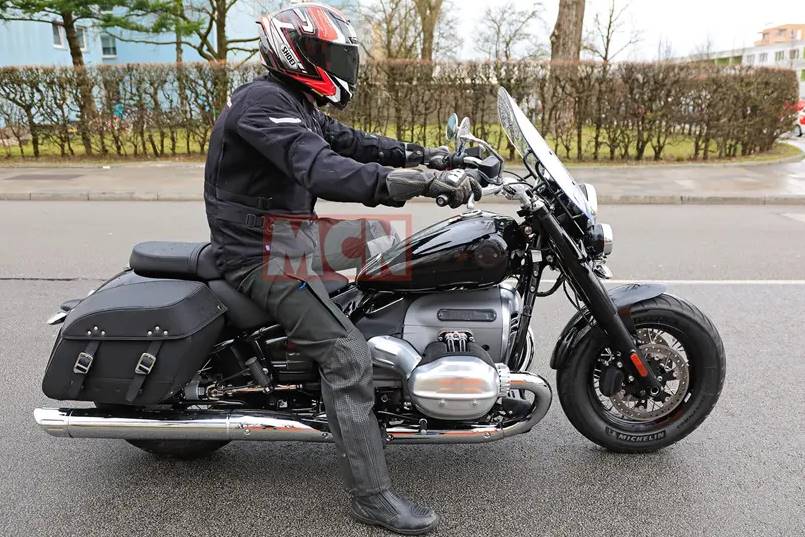 The upcoming BMW R18 will draw power from a 1,800cc, boxer-twin engine that is the biggest motor ever produced by BMW for any of its mass production motorcycles.

BMW R18 is all set for its global debut on the 3rd of April. Ahead of the official unveiling, the full-sized cruiser has been snapped completely undisguised, image courtesy MCN. Starting off with the front, the upcoming BMW R18 cruiser will get a rounded headlamp with chrome bezel. The rounded rear view mirrors are also chrome plated and so are the brake and clutch levers. The R18 gets a large windscreen up front that not only will serve the purpose but gels well with the overall design language. The motorcycle also gets soft-box panniers with buckles and the turn indicators have quite an interesting shape too. The pictures also reveal the instrument cluster of the cruiser, which will be a single piece analogue unit with a small digital readout.

Speaking of powertrain, the upcoming BMW R18 will draw power from a 1,800cc, boxer-twin engine that will be good for developing respective power and torque outputs of 91hp and 158Nm. This is the biggest engine ever produced by BMW for any of its mass production motorcycles. The bike is expected to get multiple riding modes along with a traction control system and cruise control as well. Braking will be taken care of with the help of dual discs up front along with a single disc at the rear. A dual-channel ABS (Anti-Lock Braking System) will be offered as standard equipment.

Apart from a cruiser, BMW will also be coming up with an R18 touring model that will get a more fancy equipment list and loads of other features. The upcoming BMW R18 will rub shoulders against the likes of the cruisers from Indian Motorcycle and Harley-Davidson. Expect India launch to take place by the end of this year or early 2021.