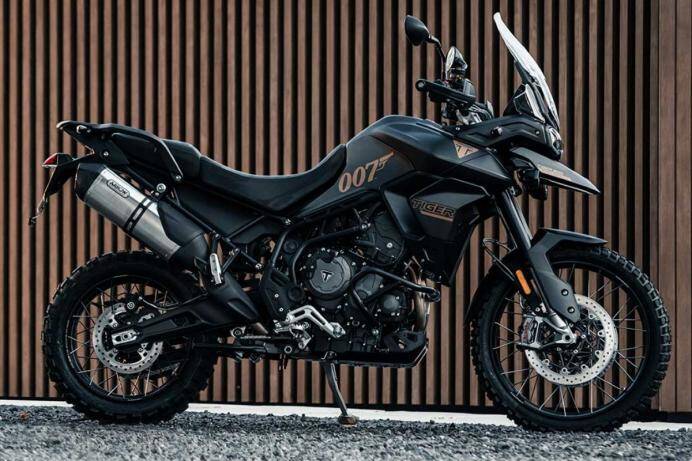 This new limited edition motorcycle from Triumph is based on the top-spec Rally Pro variant of the Tiger 900. Triumph Motorcycles has revealed that only 250 units of the new Tiger 900 Bond Edition will be available globally. Each of these limited edition motorcycles will be individually numbered on the handlebar clamp with a signed certificate of authenticity. The Tiger 900 Bond edition will be finished in a unique Matt Sapphire Black paint scheme and it will feature exclusive ‘007’ graphics with blacked-out inserts to make this good-looking ADV even more appealing.

The new Triumph Tiger 900 Bond Edition gets exclusive features such as the ‘007’ TFT start-up screen animation, heated rider and pillion seat along with Bond Edition branding on the saddle, a set of high-specification Michelin Anakee wild off-road tyres for advanced off-road capabilities, etc. The new Tiger 900 Bond Edition is the second limited-edition motorcycle from Triumph to be built in collaboration with the Bond franchise.

The new Triumph Tiger 900 Bond Edition is powered by a BS6-compliant 888cc, liquid-cooled, inline 3-cylinder engine. This motor churns out 95 PS of maximum power at 8750 RPM and 87 Nm of peak torque at 7250 RPM. The engine comes mated to a 6-speed manual gearbox and it gets six different riding modes. They are – Rain, Road, Sport, Off-Road, Rider-configurable, and Off-Road Pro. As already mentioned before, only 250 units of the Tiger 900 Bond Edition will be available globally. 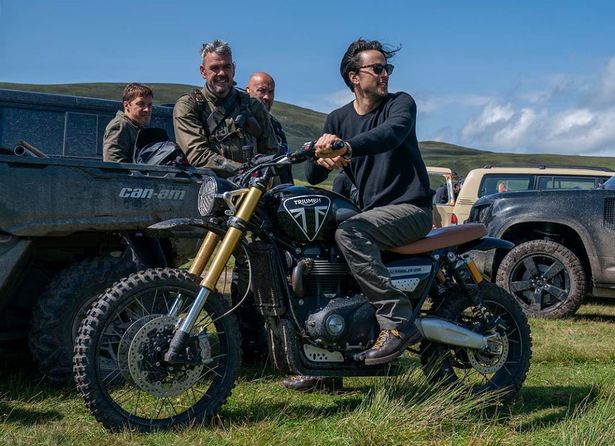 The Hinckley-based motorcycle maker is an official partner in the James Bond film franchise for the first time, with two models used in stunts in the 25th Bond Blockbuster.

Not only that but the company has created a new limited-edition model inspired by one of the models used in the film.

The Tiger 900 Bond Edition takes direct influence from the Tiger 900 used in a series of action sequences in the new 007 movie.

Tiger 900 and Scrambler 1200 motorcycles feature in stunt scenes in the film, following a partnership between Triumph Motorcycles and EON Productions announced in December 2019.

No Time To Die was filmed in 2019 in several locations including Jamaica, Norway, Italy and the UK, and Triumph is the only motorcycle partner in the movie.

It joins other 007 vehicle partners including Jaguar Land Rover. 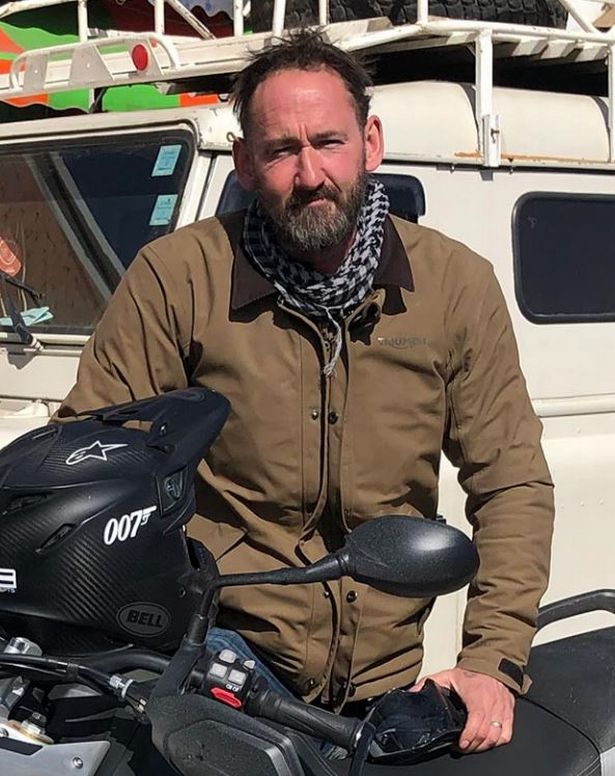 For months, the Triumph design workshop team collaborated behind closed doors with the stunt team to configure several feature motorcycles for the movie, including special preparations of Tiger 900 and Scrambler 1200 models to handle the extreme and dynamic action sequences – and the film’s stunt riders – demanded.

“Is it agile and powerful enough for the stunt riders to achieve what I want them to? And also, crucially, does it fit the story of the film in a way that’s credible onscreen.”

He added: ““We loved the look of the Scrambler 1200, and we already knew we would use those in No Time To Die, but then Triumph offered us several prototypes of a bike that hadn’t yet been launched at that time, and that was the Tiger 900.

“The whole stunt team realised very quickly that these were amazing bikes.

“We spent a long time on the Tiger and it is so balanced. You can just have great fun with it.

“The Tiger 900 is the most confidence-inspiring bike, it allows you to really push the ride as far as you want, you can take as many liberties as you want; stand up sideways drifting in third gear, slow wheelie it, slide it Supermoto-style. I honestly think it’s one of the best bikes I’ve ever ridden, it’s fantastic.”

“Get on it, and it’s an absolute blast straight off. I’d switch everything off (Off-Road Pro mode) and ride that thing like it was a motocross bike, couldn’t stop grinning.

“For the film we rode the Scrambler 1200 absolutely flat out, I mean as aggressive as you can ride a motorcycle, lighting it up off-road on tough terrain in Scotland, drifting it through really slippery streets in Matera (Italy), hitting steps flat out in third gear, quick direction changes, jumps, everything you could imagine, and that bike performed brilliantly.”

Lee also highlighted one particular stunt scene in which the Tiger 900 performed as the ‘most challenging’ in the new film.

He said: “We were riding them at high speeds and bouncing off the sides of cars during the Norway chase scene.

“It was amazing being able to ride behind and direct my lead stunt rider, constantly telling him to get in there, I want you alongside Bond, hitting the side of his door, cutting behind. There was a point where we jumped the Tiger over a car and under a helicopter.

“To have the confidence in a motorcycle to do all those things, on the move, while directing through an earpiece shows you how good that bike is.” 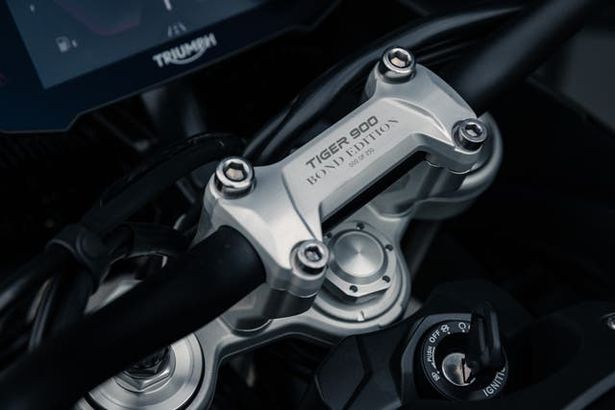 Limited to just 250 examples – with each individually numbered and accompanied by a signed certificate of authenticity – the Tiger 900 Bond Edition receives a matt black paint scheme and 007 graphics, as well as a billet-machined handlebar clamp.

A blacked-out styling package brings a black finish to the frame, headlight finishers, side panels and sump guard – among other components – giving the bike an understated look.

Each bike gets a unique 007-theme start-up animation on the screen, while the heated rider and pillion seat receive special Bond Edition branding. Prices for the Tiger 900 Bond Edition start from £16,500.

Triumph also created a limited-edition Scrambler 1200 Bond Edition model but it has already sold out.