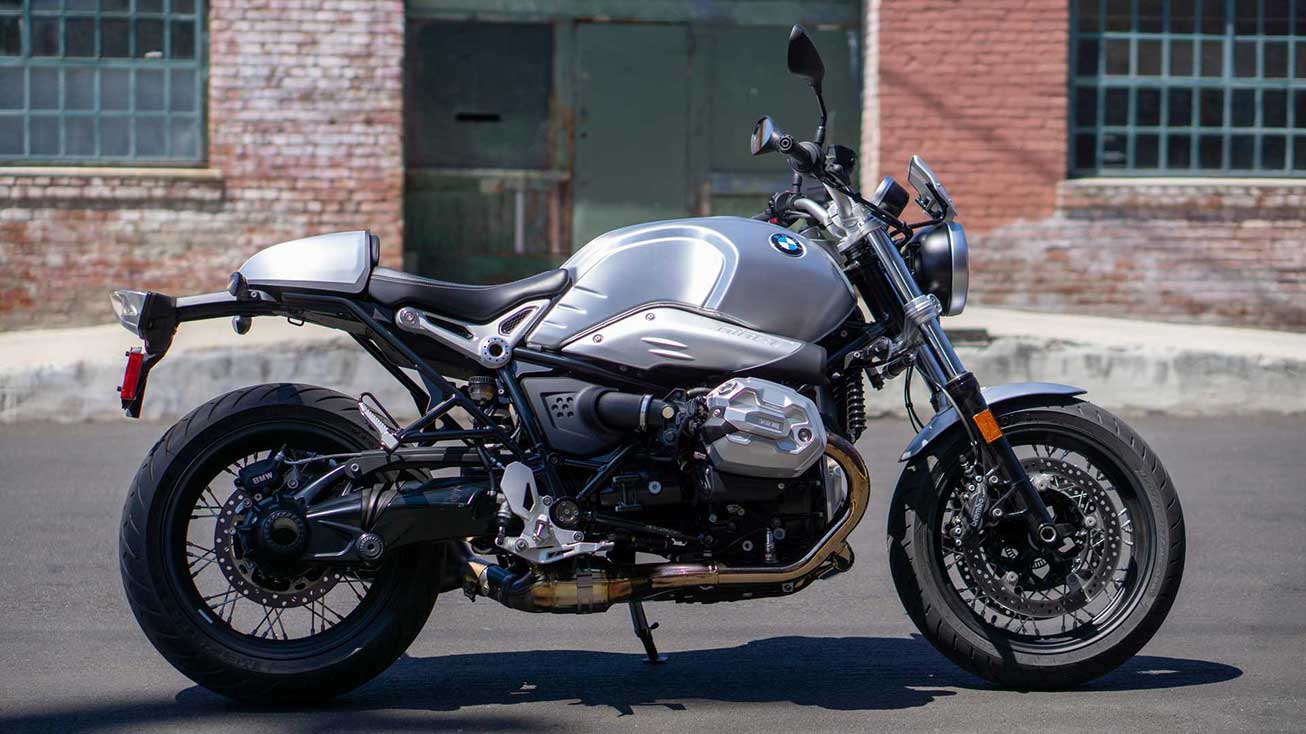 To most motorcyclists, the term “pure” evokes images of kickstarters, chrome finishes, and cable throttles. It takes us back to simpler times; a time before electronic nannies and catalytic converters. Back then, motorcycles were easy on the eyes—and the technology.

Charming as it is, nostalgia certainly has its limitations. Most riders aren’t rushing back to hardtails, drum brakes, and carburetors. Luckily, modern-classic motorcycles can cherry-pick the best aspects of yesteryear and today. At least that’s what BMW attempts with its R nineT family. Now, circular headlamps can house LED lights. Wire-spoke wheels can bear retro styling as well as tubeless tires. Design can be both timeless and trendy.

The four R nineT models express this dual nature to various degrees, but the Pure variant embraces the back-to-basics philosophy most. The main ingredients remain intact, but the Pure favors stripped-down practicality over performance. A steel fuel tank replaces the lightweight aluminum unit, a conventional fork steps in for the responsive USD front end, and the cockpit hosts just one round gauge.

Those concessions result in a $10,995 price tag, cementing the Pure as the less-is-more option in BMW’s feature-rich lineup. Since introducing the R nineT in 2015, the Bavarian brand has positioned the neo-retro naked as a custom-friendly platform. The Pure just takes that approach to the next level. Sporting a Mineral Gray Metallic paint job, the base trim is both comely and capable. However, BMW proved that the stock guise is just the starting point when it put an R nineT Pure Option 719 in our charge for a few weeks.

The Ultimate Customizing Machine
In 2021, the R nineT’s air/oil-cooled, 1,170cc, boxer engine earns a Euro 5-compliant update. While noise emissions regulations muffle much of the platform’s signature bark, it holds onto its bite with 109 horsepower at 7,250 rpm and 85 lb-ft of torque at 6,000 rpm. The upgraded shock absorber now boasts a hand wheel adjuster and travel-dependent damping while ABS gains cornering functions. Rain and Road ride modes now come standard and full LED lighting illuminates the way.

Despite those generous revisions, BMW went even further with the R nineT’s paint and accessories catalog. Each model now features series colorways along with BMW’s custom in-house Option 719 paint schemes and accessory kits. For an additional $1,350, customers can trick out the R nineT Pure with the Option 719 Aluminum package seen here, which includes an aluminum front fender, fly screen, tail cowl, and gas tank.

The brand’s Billet Pack Classic tacks on milled cylinder head and engine front covers along with an extra $1,050. Additional cosmetic upgrades such as spoked wheels and the design option silencer add another $975 to the bill. Of course, the House of Munich offers a Comfort Package that unlocks the Dynamic ride mode, heated grips, and cruise control. On the other hand, the Select Package prioritizes safety with traction control, engine braking control, and an adaptive headlight.

After all the extra components, software patches, and destination charges, the R nineT Pure Option 719 retails for $15,865. That’s still $80 under the standard R nineT’s $15,945 MSRP, but it’s a far cry from the minimalist machine that the Pure sets out to be. For that reason, we’re going to primarily focus on the model’s standard equipment, and that all starts with the big-bore boxer.
The Ride

BMW may have updated the eight-valve, opposed-twin to meet modern emissions standards, but the aging powerplant retains all of its vintage charm in 2021. Twist the throttle while in neutral and the bulletproof boxer still jolts to the left. As always, vibrations course through the handlebars and foot pegs at higher revs. Unlike most modern motorcycles, BMW preserves these quarks, chalking them up to the R nineT’s “character”.

The Bavarians may hold on to those old ways, but the boxer now delivers an even stronger punch in the mid-range. Road mode harnesses those pulses with a linear power delivery while Rain mode dampens the effect in the name of safety. Unsurprisingly, the mid-range surge is most prevalent in the optional Dynamic mode. Those looking to maximize the Pure’s performance potential may spring for BMW’s Comfort Package as a result, but Road mode was notably capable in nearly all situations.

While the flat-twin went flat out in the mid-range, the Euro 5-compliant tune also produces lean fueling at the low-end. After a few unintended stalls off the line, I learned to babysit the clutch away from each stoplight. The low-end fueling paired with the engine’s high rpm vibes produced a narrow range of usable power, and that quality was most evident on twisty roads.

Without a slipper clutch, quickshifter, or auto-blipper, the R nineT was best ridden with smooth inputs and a patient demeanor. Aggressively banging through the gears only unsettled the big boxer, and in turn, the chassis. Consequently, R nineT riders are encouraged to let the corners come to them. That’s when the modern-classic comes into its own. On flowy canyon roads, the 43mm fork and steering damper hold a true line while the Metzeler RoadTec tires provide more than enough grip for the available lean angle.

Knocking on the door of 500 pounds, the Pure isn’t the nimblest Beemer of the bunch, but the centralized mass makes side-to-side transitions less strenuous than expected. The rear suspension adjustment knob will please two-up riders, but in the single-seat configuration, users will set it and forget it. After experimenting with the top and bottom settings, the mid-position produced the best feel without sacrificing too much comfort. However, it’s hard to characterize the ride as luxurious in any setting.

Conversely, the dual 320mm discs and Brembo four-piston calipers outperformed the spec sheet with a strong initial bite and surprisingly direct feel from the axial master cylinder. As anticipated, the two-pot Brembo binder and 265mm rotor in the rear delivered a less responsive experience, but they did a great job of steadying the 483-pound naked at slow speeds. The R nineT Pure may not win any performance shootouts, but the package sure fits the bill for everyday road use.

The Fit
Throwing a leg over the Pure for the first time, I was pleasantly surprised by the wide handlebars, broad seat pan, and narrow midsection. The low foot pegs position the knee at a 90-degree angle, though the hard parts drag much sooner as a result. Up top, the reach to the bars is a slight stretch, but the tank cutouts allow the rider’s knees to relieve pressure on their wrists. If it weren’t for the thinly padded saddle and nonexistent wind protection, the Pure could double as a suitable touring rig.

In stock form, however, the R nineT functions best in urban environments and twisty canyon roads. While the standard equipment includes a bench seat, the optional seat cowl increases both form and function. The tail unit not only locks the rider into the cockpit but also acts as a storage compartment. The removable backplate enables users to stash legal documents, disc locks, hats, and small tools in the rearward cubby. It may not replace a backpack or accommodate groceries, but it’s a convenient and reliable solution for most naked bike riders.

Similar to the ergonomics, the streamlined electronic suite is straightforward and user-friendly. The single gauge doesn’t include a tachometer, but the LCD display reports engine temperature, ambient temperature, time, mileage, and trip distance. The analog speedometer is a nice retro touch while a dedicated button allows riders to effortlessly cycle through the ride modes.

With the Comfort Package, cruise control settings are located at the top of the left switchgear and the right-hand side hosts the heated grips button. Select Package features like the adaptive headlight unit and traction control work in the background, freeing the rider to concentrate on the road ahead. The simple but effective accommodations should satisfy most riders, but BMW’s robust add-ons collection will also serve those that enjoy the bells and whistles.

Conclusion
Thanks to the lack of flashy TFT displays and radar-assisted farkles, the Pure lives up to its namesake. The tried-and-true boxer produces just enough rumble to enliven the ride and the tech never presents a distraction. What the platform gives up in performance it gains in ease of use and enjoyment.

Even without the Option 719 cosmetic kits and additional electronic upgrades, the R nineT Pure is an excellent companion for the weekday commute and the weekend cruise. The modern-classic Beemer may have electronic nannies and a subdued exhaust note, but the entry-level R nineT still captures the pure fun of riding a good, old-fashioned motorcycle.