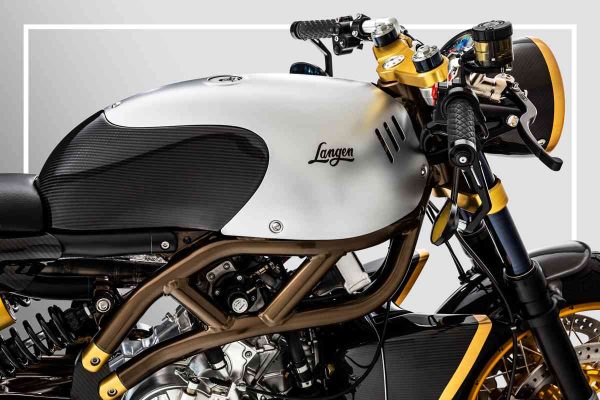 The first two lucky owners will see their motorcycles for the first time before Motorcycle Live opens to the public on Saturday 19th November at the NEC Birmingham. The two motorcycles will remain on display on the Langen Stand 3E25 at the NEC for the duration of the show before being delivered to their new owners. Both motorcycles have been carefully created to meet each client’s exact specifications and are the embodiment of the Langen customisation and build process.

Langen Technology Limited (Langen), one of the leading automotive engineering and development companies specialising in low volume motorcycles, is today unveiling the very first customer two stroke 250cc V-twin machines. The keys will be handed over to the lucky new owners at the start of the Motorcycle Live exhibition at the NEC.

In a specially orchestrated ceremony, the founder of Langen, Christofer Ratcliffe, will greet the new owners and provide a short presentation on the customisation process of each machine. Chris will then be available for a short Q&A session on the stand. 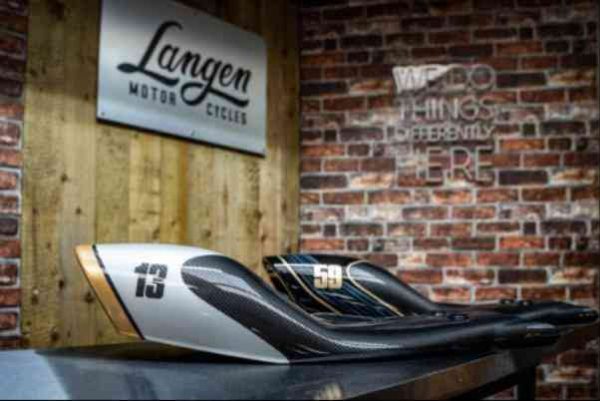 The two customer motorcycles will remain on display on the Langen stand 3E25 in Hall 3A at the NEC between the 19th and 27th December. A range of two stroke bikes from the 80’s and 90’s will also be exhibited.

The Langen team will be joined by IRRC SBK Champion and Ex 125 & Moto3 GP Rider Danny Webb to give his account of how the Langen Two Stroke performs on track.

What makes this motorcycle unique is the intoxicating 250cc V-twin engine combined with the focus on simplicity, the reduction in weight using modern technology and materials, along with the use of components of the highest quality. Modern design meets Great British traditional craftsmanship.

Being born as a side project in the Ferrari factory, the first version of the V-Twin was realised in 2014 by Vincenzo Mattia as a brutal GP race engine delivering 95bhp. The patented fuel injection and ECU controlled lubrication system have enabled Langen and Vins to develop the purebred V-Twin into a durable, controllable engine which meets modern emissions regulations. The well-mannered power delivery allows a predictable ride with endless, addictive torque on tap. Take the needle upwards of 9,000 rpm for an experience like nothing else on the road.

Drawing on a wealth of experience and expertise, Langen pride themselves on producing a whole motorcycle package which can not only contend on the race-track but also provides a confidence inspiring and unequalled ride on the road. Langen’s specialism echoes the great Colin Chapman “simplify then add lightness”. Relentless design, testing and optimisation of every component and system on the bike enables the Two Stroke to weigh in at an incredible 120kg translating to over 600bhp/tonne. The aluminium space-frame chassis provides the optimum stiffness, weight and geometry to give incredible cornering speeds, change of direction along with reassuring stability at 130mph.

Christofer Ratcliffe Founder and CEO of Langen comments: “ At Langen we believe that “cars move the body yet motorcycles move the soul” – it demonstrates the intangible and unmatched human experience of riding and owning a Langen. The whole team at Langen are excited to hand over the first two bikes, like all automotive businesses we have had our own issues with components and supply-chain and coupled with COVID-19 this moment has been a long time in the making; however the best things come to those that wait and our first customers cannot wait to throw a leg over these bikes and reap the rewards of the hundreds of man hours that have gone in to each machine – they are now ready to be enjoyed.” 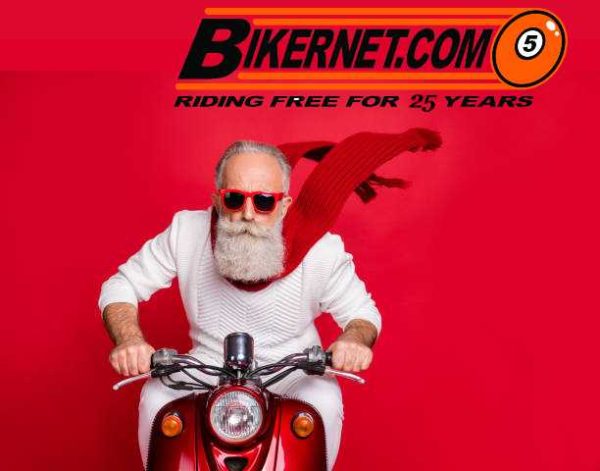 What is Hub-center Steering Motorcycle & Why it is Better 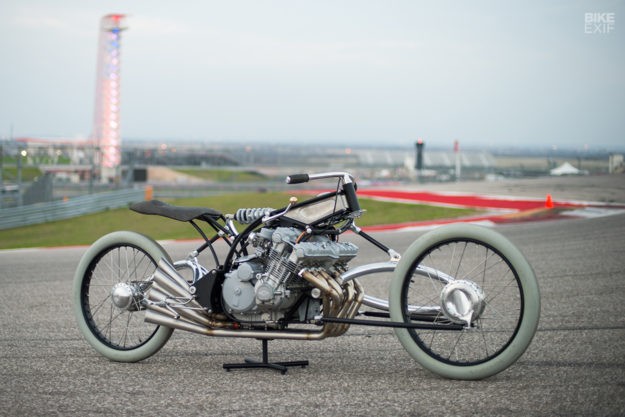 Hub-center steering is one of several different types of front-end suspension and steering mechanisms used in motorcycles and cargo bicycles. It is essentially a mechanism that uses steering pivot points inside the wheel hub rather than a geometry that places the wheel in a headstock like the traditional motorcycle layout.

Perhaps the most venerable example of the idea came in the form of the 1930 Majestic. This Georges Roy design used a novel pressed-steel monocoque chassis, and it incorporated an automotive-type chassis with hub-center steering. Other bikes had already used the configuration in such machines as the Ner-A-Car and the Zenith Auto-Bi, but the Majestic made it lovely to behold.

Another bike, the Vyrus 984 C3 2V Razzetto, was one such motorcycle that used hub-center geometry.

Vyrus is a small Italian motorcycle manufacturer based in Coriano, Italy, and their bikes such as the “Tesi” – Thesis in Italian – had their designs originate from a university engineering project linked to the motorcycle legend Massimo Tamburini. The Tesi, and the Vyrus 984, were instantly identifiable by their use of their hub-center steering front suspension and steering arrangement.

Those fabulously expensive bespoke motorcycles have been called “functional works of art,” and they look a bit like something you might see in a video game. 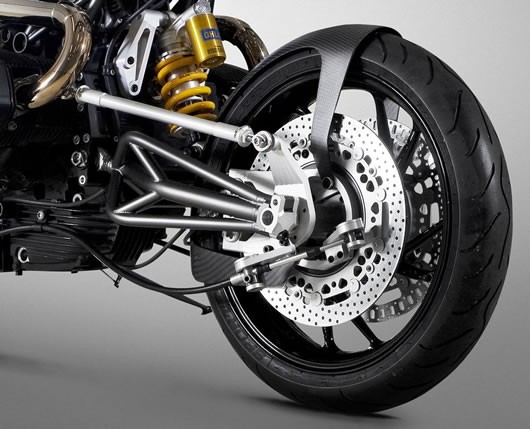 In hub-centered bikes, the front wheel is attached to a swingarm with a shock and an internal pivot point. Steering is achieved using those linkages to turn the wheel on a pivot point. Hub-center steering has been employed on motorcycles for more than a century, but the design, despite what some engineers say offers a distinct advantage, never took hold.

But the founder of Vyrus, Ascanio Rodorigo, once worked for Bimota as a race mechanic and engineer during the 1970s and his tenure there lasted until 1985. When Rodorigo finally left Bimota, he started his own company but partnered with Bimota on the hub-center-steered Tesi. He then went on to take the steering concept deeper and refined it for his own company’s motorcycles.

Now builders like Bryan Fuller of Fuller Moto, Revival Cycles, and others have built beautiful machines which harken back to the hub-centered glory days of the Majestic. Builders such as Stellan Egeland used a hopped-up 1200 boxer engine from a BMW HP2 Sport. He also added his own hub-center steering setup from ISR to a frame he made from a 2391 steel tube. The ISR kit is a thing to behold.

Revival’s ‘The Six,’ which features a ballsy Honda CBX motor, is another take on the hub-steer geometry. It was commissioned by museum owner and bike collector Bobby Haas for his Haas Moto Museum in Dallas and made by Revival’s Alan Stulberg and his crew.

Stulberg said the commission was aimed at paying homage to the Art Deco classic Majestic and added that he and the team became “obsessed with its design language and flow” since they first saw the bike at the Barber Museum. 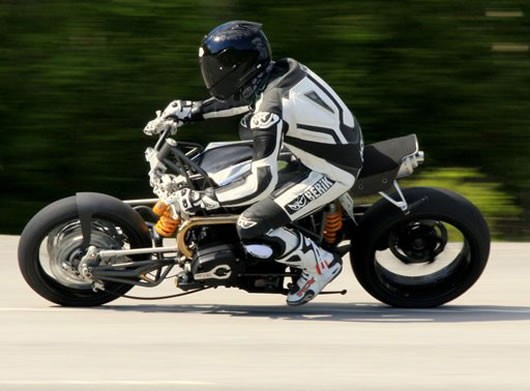 Hub steering systems don’t dive as much under braking and hard cornering as do conventional telescopic fork setups. They push braking forces back into the chassis more efficiently rather than transferring immense bending forces to a pair of upright forks. The ride experience is exceptional as braking performance throughout corners is greatly enhanced.

It works like this: A wheel hub pitches back and forth on a central pivot and is supported by two large steering arms actuated by handlebars. The handlebars connect to the front steering and swingarm using complex linkages. A fixed arm connects a pull-and-push rod on either side of the hub-center to help steer the bike. The geometry also includes a second pair of static rods to ensure the axle stays level with the bike’s mass.

While hub steering has a number of clear advantages, its downfall is that it is considerably more expensive to manufacture and maintain and requires exceptionally experienced mechanics to tune and repair.

But it does look good, works more efficiently from an engineering standpoint, and directly addresses the most important factor in the motorcycling experience: braking. 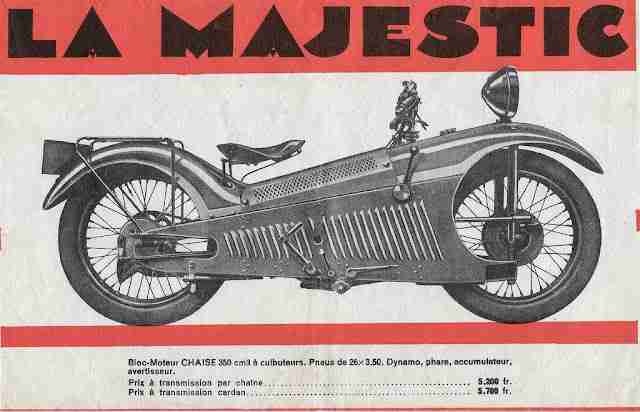 The Majestic – Artistic Design from the 1920s
from https://www.odd-bike.com

All the oily bits were fully enclosed under louvered panels, with partially enclosed fenders covering the wheels at both ends. The rider was completely isolated from the grime and muck of the running gear and powertrain, perched upon a sprung saddle and controlling the machine via levers and bars that poke through the all-encompassing body.

Presented in 1929, the prototype Majestic (which was reported as Roy’s personal machine) featured an air-cooled 1000cc longitudinal four-cylinder engine from a 1927-28 Cleveland 4-61. This would not remain for production, however.

While at least two Majestics were built with a 750cc JAP V-twin (arranged, like a much later Moto-Guzzi , with the Vee transverse and the heads poking through the bodywork) and records note that JAP singles, a Chaise Four, and at least one Gnome et Rhone flat twin were also employed, the majority of production machines coming out of Chartenay featured air-cooled Chaise engines.

These were overhead valve singles featuring unit two or three-speed gearboxes operated by hand-shift, available in 350cc and 500cc displacements. Distinctive for their single pushrod tube that resembles a bevel tower (but contains a pair of tightly-spaced parallel pushrods) and external bacon-slicer flywheel, these powerplants were a favourite of French manufacturers during the interwar period and were used by a variety of marques in lieu of producing their own engines.

The base price of the Majestic was 5200 Francs for a 350 with chain final drive; an extra 500 Francs netted you optional shaft drive.

An additional option that is rarely seen on surviving examples was a fine “craquelure” paint option that was applied by skilled artisans. It involves a process of deliberately screwing up the paint job in the most controlled and flawless way possible, applying a contrasting top coat over a base using incompatible paints that will cause the top coat to crack in a uniform fashion, something like a well-aged oil painting or antique piece of furniture.

The result is spectacular – and perhaps a bit tacky, giving the machine the appearance of a lizard skin handbag. (Maybe a later Rock Star would have loved to ride it as the “The Lizard King” ? )

The Majestic was impeccably stable at higher speeds compared to the other motorcycles of that era.

It was also agile and light footed in a way that similar machines, like the Ner-A-Car, were not.

The relatively low weight, around 350 pounds, carried with a very low centre of gravity made for tidy handling that was more than up to the meagre output offered by the powerplants.

Majestic was targeting a clientele that didn’t really exist: the gentlemanly rider who might desire a superior (read: expensive) machine as a stablemate to their elegant automobiles. 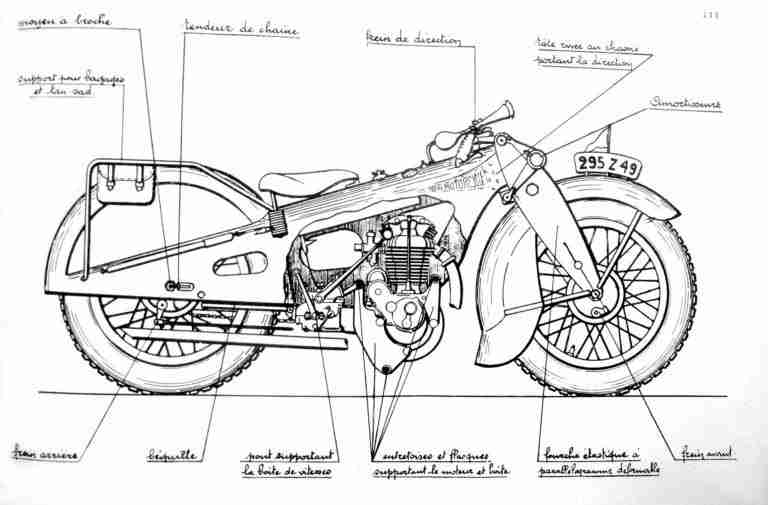 Georges Roy’s earlier 1927 brand called New Motorcycle was a far better barometer of things to come, predicting the style and design of machines that would emerge during the 1930s and beyond. The Majestic has far less impact and was more of a curiosity than predictor of trends to come.

Georges Roy’s brilliance as a designer is unquestionable, and deserves more praise than he ever earned during his lifetime.

Majestic is a little bit of elegance floating on the sea of staid machines that clutter up the history books.

Georges Roy was a French industrialist and engineer born in 1888 who achieved success in the textile business – specifically in knitting and sewing equipment. He was, however, an early adopter of motorcycling at the turn of the 20th Century – reportedly his first machine was a Werner, a Parisian machine that introduced the term “Motocyclette” in 1897.