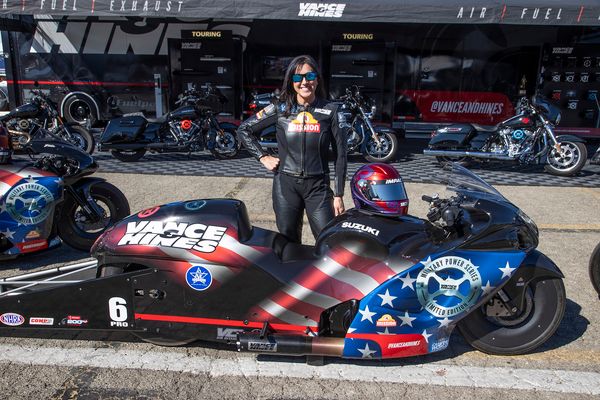 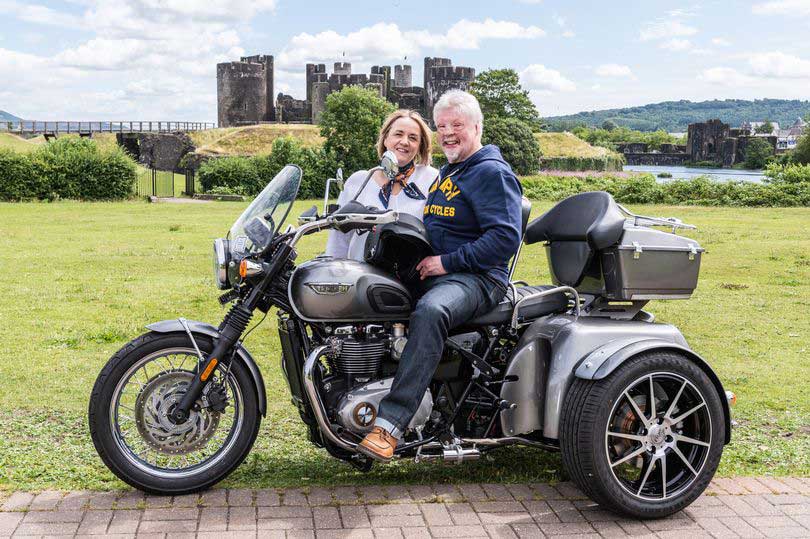 Simon signed up for the British Army at 15. Aged 20, when serving in the Welsh Guards, he was aboard the logistics ship RFA Sir Galahad – laden with fuels and ammunition – when it was bombed by the Argentine Air Force during the conflict in the South Atlantic.

At times Simon said he was close to giving in, but courage and determination saw him emerge positively as a strong advocate for troops’ and veterans’ rights.

Along with his many charitable activities he gives inspirational talks on achieving mental wellness. Awarded the OBE in 1992, Simon was made a CBE in 2016.

The gift was the result of a crowd-funding campaign which had its roots in a chance conversation at a presentation given by Simon two years ago.

Simon revealed to former Meriden Triumph engineer and world speed record holder Norman Hyde that he would really love a trike like the one ridden by Billy Connolly on his TV travel series.

It spurred Norman into action and he decided to embark on a mission to fulfil Simon’s dream.

He said: “Knowing what Simon had given to our country and knowing what good people there are in the bike world, from manufacturers and importers, through dealers to clubs and riders, I immediately said ‘leave it to me, I’ll fix it’.”

Norman organised crowdfunding and the £25,000 project got off to a fabulous start when Triumph Motorcycles, which is based in Hinckley, donated a new 1,200cc Bonneville for conversion.

Trike Design of Caerphilly South Wales (coincidentally Simon’s home town) was chosen to convert the two-wheeler and adapt controls for Simon, who has fingers missing from both hands.

“This is a dream come true,” said Simon of the crowdfunded Triumph trike, which was presented to him a few days before his 60th birthday.

“I can’t thank Norman Hyde and all the people who made this happen enough.”

Donations ranging from £5 to four-figure sums came from individuals and the trade, often accompanied by messages of affection for Simon.

The Triumph Owners MCC (TOMCC) made a substantial contribution as did the Duke of Richmond (the Goodwood Estate) and the Motorcycle Industry Association (MCIA), which is based in Coventry.

Simon’s helmet was donated by LS2 and the Held clothing company are making bespoke gloves.

Hank Hancock of Trike Design (TD), specialists in three-wheeler conversions and adaptation for disabled riders, took on the job with enthusiasm.

The Triumph is fitted with TD’s latest Brookland Sport design, with boot space inside the smooth GRP mouldings.

The 17-inch wheels have independent suspension with an anti-roll bar and the final transmission from the chain to twin shafts is via a differential.

Kliktronic press-button electric gear shifting means that Simon can change up with a finger on his right hand and down with his left thumb.

Foot pedals for the throttle, brakes and clutch are similarly arranged to car controls.

“I soon worked out how to ride, and especially how to stop,” said Simon, who hopes to persuade his wife Lucy to travel on the pillion seat.

The presentation was held on Trike Design’s forecourt.

Triumph, in its many guises, was born out of a company founded by Siegfried Bettmann, who had emigrated from Nuremberg, in 1884.

It went on to make bicycles before moving on to motorcycles and later cars.

The motorcycle making side of the business was originally based in Coventry and subsequently in Meriden.

A new company, Triumph Motorcycles, based in Hinckley, gained the name rights of the company in the 1980s and is now one of the world’s major motorcycle manufacturers.

Motorcycle Mentorship Safety Day was hosted by the U.S. Army 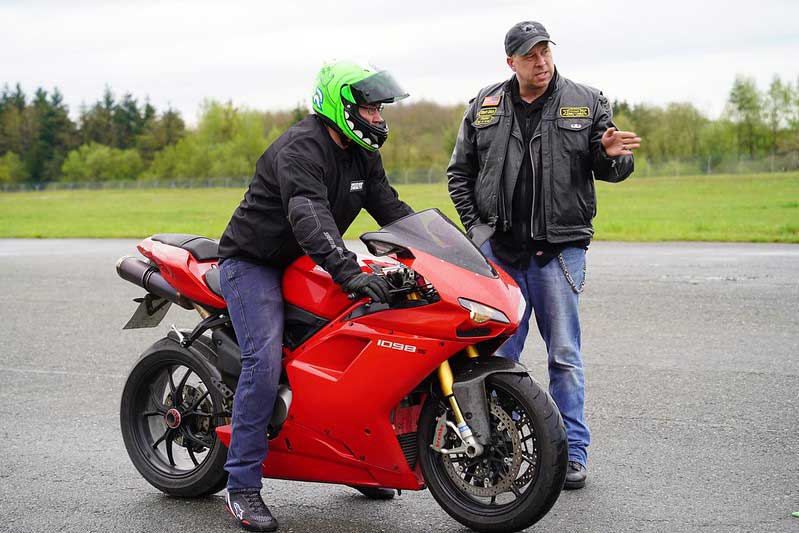 Kick off the riding season with Motorcycle Mentorship Safety Day

“We are really happy that we can hold the event this year, because it was unfortunately canceled last year due to increased COVID-19 density rates in the surrounding area,” said USAG Bavaria Safety Director Deborah Gonzales. “This event brings the installation together. It promotes mentorship, and it allows people the opportunity to have safe fun.”

“Have a lot of fun, and be safe out there,” Danbeck told the attendees. “Mentorship for motorcycle riders is very important. When you go back to your organizations, please continue to watch over the younger guys. You know the real deal – how to stay safe.”

Then the group received a blessing from USAG Bavaria Chaplain Col. Shawn McCammon.

Before starting the hands-on drills, vehicle inspections were performed by a professional mechanic from the 405th Army Field Support Brigade, safety briefings were conducted by garrison safety officers, and course exercises were demonstrated by volunteer mentor coaches.

A break was scheduled between the morning and afternoon sessions to allow riders an opportunity to eat lunch and refuel their motorcycles. And before departing for the 120 kilometer group ride off-post, Eschenbach Police Station Polizeihauptmeister Paul Zawal provided the group with one last refresher on German road laws and motorcycle safety. He also took questions at the end of his presentation.

USAG Bavaria Motorcycle Safety Day was open to all Department of Defense cardholding motorcyclists, which includes installations at Grafenwoehr, Vilseck, Hohenfels and Garmisch. Even motorcyclists from U.S. Army Garrison Ansbach partook in the event.

“We [motorcyclists] have a very tight knit group since there are only so many riders in the military community,” said Master Sgt. Robert Lewis, motorcycle safety program coordinator of 18th Military Police Brigade, 21st Theater Sustainment Command. “At the start of the season, it is all about refreshing basic skills, remembering safety protocols and building comradery.”

The Safety Office is looking for rider coaches, mentors and volunteers to assist the program. For more details on motorcycle safety, or if you want to foster a mentorship program within your unit, visit the USAG Bavaria safety website or contact the office at DSN 526-2303, CIV 09641-70-526-2303.