At Keanu Reeves’ bespoke motorcycle company, even the catalytic converters are custom-made 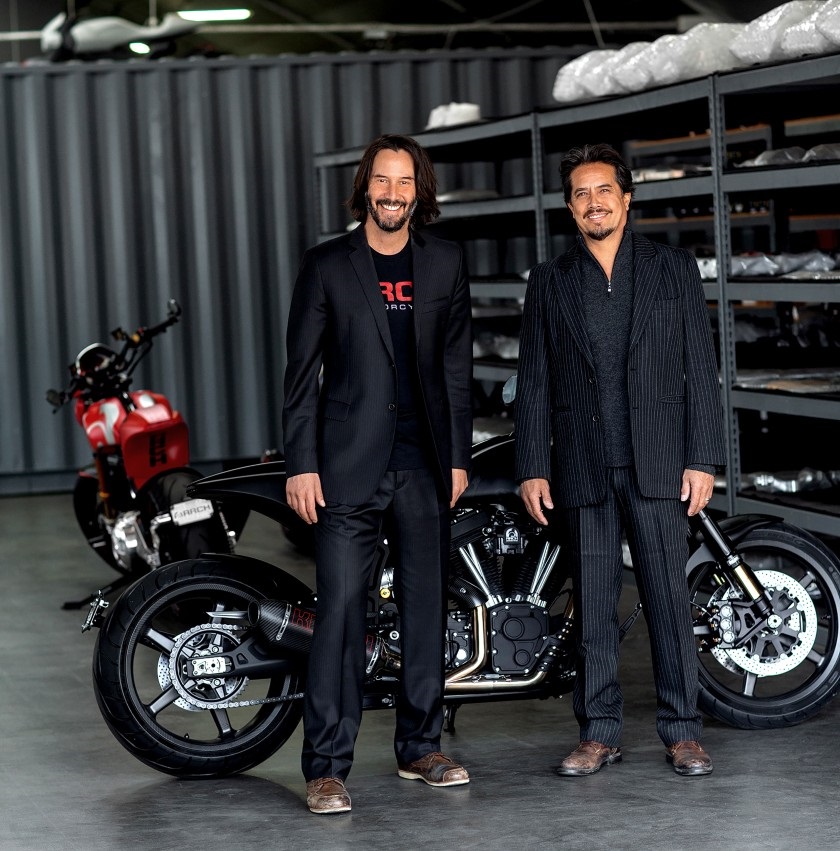 by Sue Callaway from https://www.latimes.com

It’s easy to see that the new KRGT-1 from Arch Motorcycle is a special machine. Each seat is custom-fit to the buyer. Each key, machined out of billet aluminum, comes in a dramatic case, along with a book chronicling the bike’s build story. The fuel tank, split in half to house Arch’s proprietary downdraft system, is also carved from billet. Fenders are state-of-the-art carbon fiber.

As co-founder Keanu Reeves says, every Arch is a showcase of “all the classical moments you look for in a bike.”

Much of it is made in-house. Reeves, his co-founder, Gard Hollinger — a longtime custom bike builder — and their team design and fabricate more than 200 components for each bike in Arch’s Hawthorne facility.

But there’s also some nifty out-of-house engineering on the KRGT-1 — including one component that could prove vital not just to Arch’s business but for manufacturers of internal-combustion-powered products of all sorts, from lawnmowers and automobiles to barges, trucks and power plants.

Acat Global, a Michigan-based company, is the supplier of Arch’s catalytic converters, or “cats,” as they’re called. A two-year collaboration between Arch and Acat resulted in cats that are custom-designed to fit into the KRGT-1’s unique architecture while reducing the amount of noxious exhaust gases emitted from conventional cat designs. They have helped Arch meet not only California Air Resources Board and Environmental Protection Agency standards but also stringent Euro 4 emissions requirements.

“When we began the Euro 4 process in early 2017, we put together a binder of all the regulatory stuff, and it was 4 inches thick,” Hollinger said.

The story of these two companies shows that the path some innovative products take to get to market — motorcycles and components alike — isn’t always straightforward.

Arch was born in 2011, after Reeves commissioned a one-off bike from Hollinger and tried to talk him into turning it into a business.

“I had no idea when I brought up the idea of starting a motorcycle company what that really meant,” Reeves said on a Zoom call from Berlin. “But the custom bike Gard had built for me, which eventually became our prototype, was such an amazing motorcycle to ride that I knew it was something we needed to share with the world.”

“One of the things that convinced me to go on this journey with Keanu was that his heart is pure in the endeavor,” Hollinger said. “It’s not a celebrity vanity project in the least — he’s truly passionate about motorcycles, and he saw the opportunity to leave something behind that is meaningful.”

By late 2014, the duo had launched their first production model, the KRGT-1, which Hollinger says helped birth a new genre of bike now known as the “performance cruiser.” This year, they’re broadening Arch’s range with two new models, as well as starting production on a heavily updated KRGT-1 (prices start at $85,000). Those improvements include 20 major changes involving more than 150 newly designed and manufactured components.

“A lot of companies unveil concepts but never build them,” Reeves said. “So we committed to actually producing such a bike to showcase our ambitions in terms of design, approach and sophistication.”

Much of the appeal comes from the bespoke componentry and the levels of customization Arch encourages each buyer to consider during the bike’s 90-day build. Not to mention rarity and a well-balanced and high-performance ride.

“One of the really pleasurable things for me is always the reaction from people after riding our motorcycle,” Hollinger said. “No matter how much you explain what they might expect, they’re never prepared for it — it’s indescribable.”

Such high-art machinery takes a village. Hollinger and Reeves have won over some clever supplier partners to help them pull together the components they don’t make in-house, including Bosch, Michelin, TE Connectivity and K&N. And then there’s the torque-rich V-Twin engine custom-tuned for Arch by gold-standard S&S, whose work helped Arch achieve California Air Resources Board, EPA and Euro 4 certification.

“In every case there’s a wheel, a suspension part, a tire decision to be made,” Hollinger said, “we always go for the best product that makes the motorcycle work better.”

From the exhaust side, Arch needed three catalytic converters for each bike, a part not typically made in small volumes, let alone engineered into the custom shapes Arch required.

“We didn’t seek Acat out — they came to us,” Hollinger said. “But when we started explaining to them what we needed, they said yes to everything. We’d ask for something ridiculous, and they’d do it. We started to understand that Acat had a better way to handle hydrocarbons. Without them, we would not have achieved Euro 4.”

According to the Society of Automotive Engineers, the catalytic converter — the device that filters out most pollutants from the exhaust of an internal combustion engine and increases fuel efficiency — is one of the 10 most important innovations in the history of the automobile. The EPA estimates that, thanks to cats, overall emission levels from new vehicles since the early 1970s have been reduced by 99%.

What makes Acat’s cats so much better than standard catalytic converters in wide use today?

According to Chief Executive Joe Moch, the company uses a patented “herringbone” interior structure — think lasagna noodles — that allows exhaust to flow through faster and uses fewer precious metals to “comb out” particulate matter. Acat says its patented technology increases emissions filtration by up to 20%; increases fuel efficiency by 1.5 to 3.5 miles per gallon, depending on vehicle type; runs cooler; is quieter and smaller; and, in certain applications, adds horsepower compared with its competition. “To our knowledge, no one else has figured out how to weld stainless steel this thin,” Moch said.

Unlike Arch, which has spooled up relatively quickly in less than a decade, Acat’s story is much longer. In the late 1980s, General Motors — which has had a long-standing, multibillion-dollar commitment to R&D over the decades — began pursuing a new type of catalytic converter that used a novel welding technique to create wavy layers of stainless steel that expose exhaust to more of the cat’s internal filtering surfaces.

But ever-changing environmental regulations, global politics, corner-office shuffles and consumer preferences caused GM’s cat project to ebb and flow for years, until the downturn of the late 2000s, when GM filed for bankruptcy. That process forced the company to shutter, pause or sell off certain business units, including the catalytic converter project. In 2010, Acat, shorthand for Advanced Catalytic, acquired the business in its entirety from GM for an undisclosed sum.

Acat hired a former GM employee who had worked on the project, Mike Lunkas, to oversee development. In the years since, Acat has invested to progress GM’s original solution and has patented its next-gen processes.

“GM left off at the point of development where the biggest opportunities were yet to be realized,” said Lunkas, who is now retired. “We took GM’s version and put it on steroids from where it was.”

It has taken Acat years to attain compliance from the likes of the EPA and California Air Resources Board, along with other third-party testing and validation sources. Even with that kind of hard-won credibility, though, Acat has only begun to gain adoption with big-league manufacturers.

“Some [original equipment manufacturers] want increased flow or greater horsepower, and we can do that,” said Acat Chief Operating Officer Darrell Blackburn, a 38-year supply-chain veteran of GM and Delphi. “Others want support with stringent emissions targets, so we can help them achieve CARB, EPA and Euro standards. Given our product technology performance and test data, I’m hopeful we will expand our [original equipment manufacturer] relationships sometime soon.”

As an important toe in the water, Acat is finding success among boutique brands at the upper end of the market, like Arch. Among them is Shelby American, which was founded in 1962 by racing legend Carroll Shelby and today offers after-title upgrades to Ford Mustangs and F-150s, among other vehicles, as well as performance parts.

“Our program with Acat brings cutting-edge emission systems that increase horsepower, reduce emissions and improve reliability,” said Gary Patterson, president of Shelby American. “We were encouraged to learn that Arch Motorcycle is working with Acat. Like Arch, we were attracted to their durability, performance and quality.”

So why aren’t the big carmakers more bullishly adopting a technology that would meaningfully benefit the planet, improve their carbon footprints and help their balance sheets? Corporate average fuel economy levels, set by government mandates, are expensive to meet and are one reason many car companies invest in hybrids, electric vehicles and fuel-cell systems as offsets. But no car company contacted would comment on Acat’s solution — because they hadn’t conducted their own validation tests.

It’s tough for breakthrough technologies to get a foot in the door of the automotive industry’s complex supply chain, with its relationships and long-term contracts. Then there’s simply bandwidth: To adopt a new component, no matter how superior it may be, often takes years.

Arch’s embrace of Acat illustrates how smaller companies can drive innovation — often for focused reasons that don’t align with bigger benefits that related industries, like automotive, could reap. It’s a reminder that even as major carmakers invest heavily in Silicon Valley research labs, from which they hope to engineer the future of driving, practical fixes might come from smaller players — or ideas that have been kicking around in the industry for decades.

As Acat works its way into conversations with massive manufacturers, Arch sees more innovation on the horizon.

“We talk in-house about making our own engine,” said Reeves, who started riding at 22 and remains, according to Hollinger, Arch’s “No. 1 test driver.” “Other ambitions include developing new models and maybe getting into the electric game. It would also be great to see Arch do aftermarket pieces — mixing creative with manufacturing, we could come up with a lot of cool, for lack of a better term, ‘Arch tech.’”