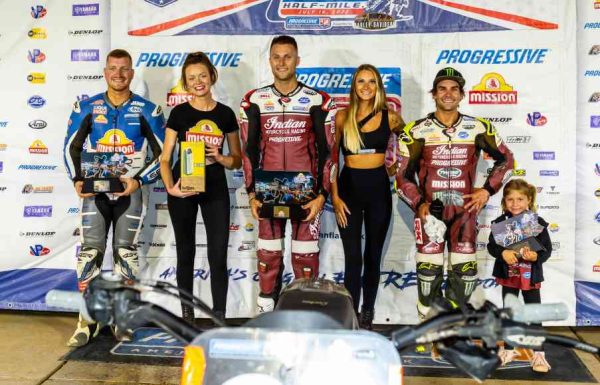 INDIAN MOTORCYCLE RACING CRUSHES THE COMPETITION AT THE PORT ROYAL HALF-MILE
WITH BAUMAN, VANDERKOOI AND MEES SWEEPING THE PODIUM FOR THE SECOND CONSECUTIVE WEEKEND

In the main event, Bauman was swift off the starting line, getting the hole shot and an immediate lead over Mees, running close behind in second. Despite early attempts by Mees to overtake him, Bauman remained unphased, opening up a gap on Mees and the rest of the field. Bauman led wire-to-wire, ultimately taking the checkered flag for his third win of the season. Meanwhile, Mees was entangled in a heated battle with Vanderkooi for second. With less than a minute and two-laps remaining, Vanderkooi made a bold move, taking the higher outside line to pass Mees and secure his second-place spot on the podium.

“Tonight was another incredible night of racing and a testament to the talent and grit of our riders. Considering the restrictions that have recently been imposed on the FTR750, it’s all the more gratifying to sweep the podium for the second consecutive weekend,” said Gary Gray, Vice President Racing, Service & Technology for Indian Motorcycle. “Briar’s [Bauman] incredible will has been on display at these past two events, and as a result, he’s back in the hunt as the battle for the championship tightens. It’s looking to be an absolute dogfight over the remainder of the season.”

Mees continues to lead the championship with 173 points, while Bauman now sits solidly in second place trailing by a mere eight points.

In addition to the incredible racing action, the night was filled with emotion for Bauman and the entire paddock, following the tragic loss of a fellow racer, Ryan Varnes, at the recent New York Short Track. Bauman paid tribute to Varnes throughout his winning night, memorializing Varnes’ by donning his number 68 and including Varnes’ girlfriend, Jennifer Hoshauer, with him on his victory lap.

The 2022 AFT season will continue on Saturday, July 30 at the Peoria TT in Peoria, IL.

ABOUT INDIAN MOTORCYCLE® : Indian Motorcycle is America’s First Motorcycle Company®. Founded in 1901, Indian Motorcycle has won the hearts of motorcyclists around the world and earned distinction as one of America’s most legendary and iconic brands through unrivaled racing dominance, engineering prowess and countless innovations and industry firsts. Today that heritage and passion is reignited under new brand stewardship. To learn more, please visit www.indianmotorcycle.com 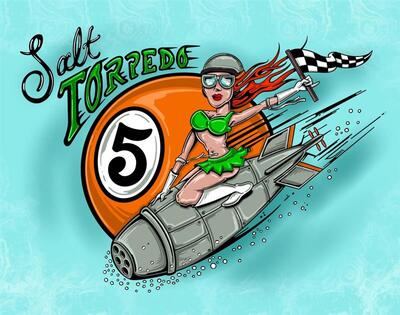 Did you know Bikernet.com Facebook Page has over 10,000 Followers. Check us out by Clicking HERE. Your Feed in Your Control – on our Bikernet.com Official Facebook Page. Stay updated on our Bonneville Racing Project as well !!! 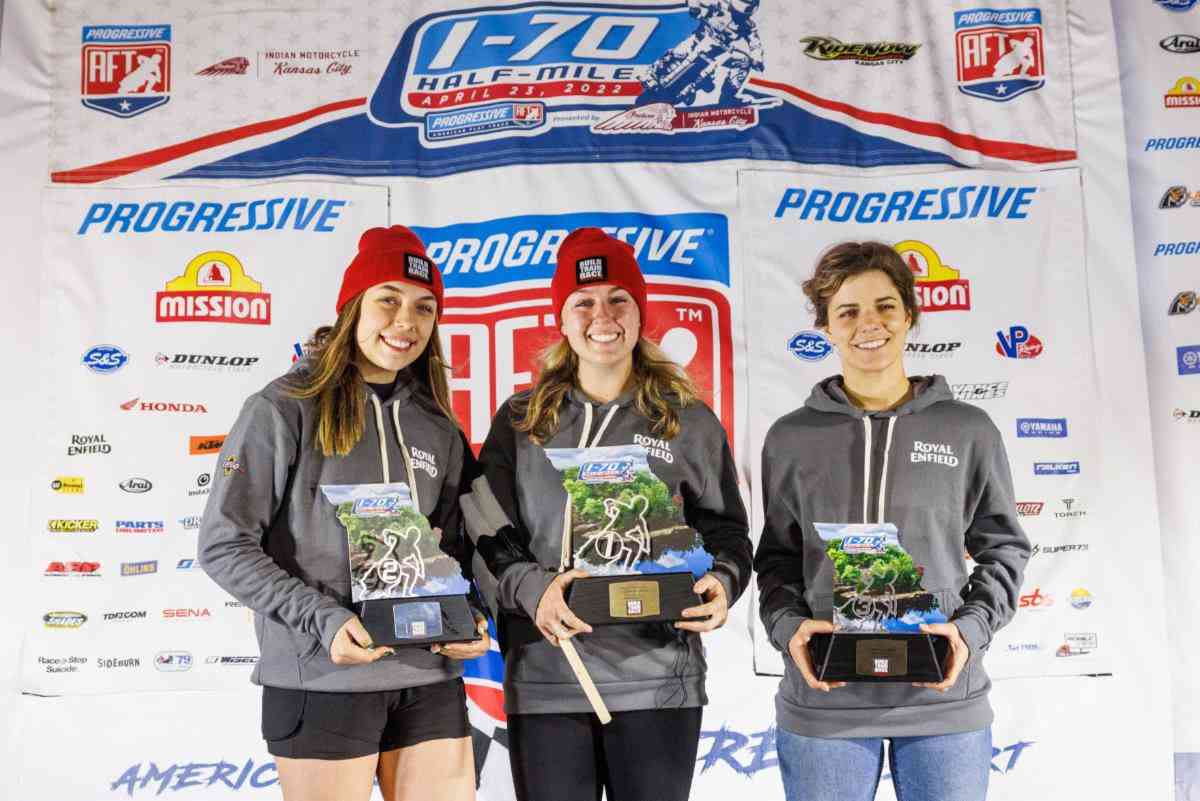 Milwaukee, WI (Monday, April 25, 2022) – The Royal Enfield Build. Train. Race. Flat Track program held its first full-grid race of the 2022 season at I-70 Motorsports Park in Odessa, Missouri, where seven returning riders and eight new faces took to the track. The larger field of racers combined with a new American Flat Track venue and some wild weather conditions created a whole new race dynamic, but in the end, there was a familiar face atop the podium—Jaycee Jones topped the first 2022 BTR Flat Track race featuring the full roster, storming to victory ahead of newcomer Zaria Martens and BTR veteran Jillian Deschenes.

The women of BTR Flat Track were looking forward to a test day I-70 Motorsports Park as a final test-and-tune session ahead of the season. But due to strong winds and track equipment issues, the program was abbreviated, only leaving the women with two test sessions. From there it was trial by fire as the BTR Flat Track field took to the grid for the first official round of the season (following the “BTR Select” exhibition at the Volusia Half Mile).

Jaycee Jones led the way from start to finish, never relinquishing control of the eight-lap race. Behind her, the battle to watch was between Zaria Martens and Jillian Deschenes. The two dueled throughout the race, much to the Missouri crowd’s delight, with 18-year-old Martens besting veteran BTR racer Deschenes at the checkered flag.

“It was flawless racing by all 15 BTR Flat Track women, and a great start to the season,” said Breeann Poland, Marketing and Communications Lead – Royal Enfield Americas. “Despite limited track time and the ladies not being able to get ample time on their bikes, they supported each other, offered each other advice and feedback, and went out there and put on a great race. Having 15 women from various backgrounds and personalities all under one canopy, working together with a shared competitive spirit is what we’ve always strived for.”

Through the combination of seasoned veterans and newcomers, and an overall faster field of riders, the night proved to be particularly challenging for Gabrielle Hughes, who was faced with the challenge of improving her lap times in order to line up for the main event. Through teamwork and perseverance, Hughes summoned the fortitude to slash several seconds off her lap times to card her best-ever performance.

“It was a rollercoaster of emotions for me,” Hughes said. “Our seven-session practice the day before the race but cut short after only two. The racetrack was a completely different beast the next day and the rough track terrified me. But Jillian and Zaria helped me get my head straight, and Bree lit a fire under my butt. My awesome team wouldn’t leave me behind and I went out and beat two girls. I am hungry to keep pushing forward, and each race I am going to come back stronger this season.” 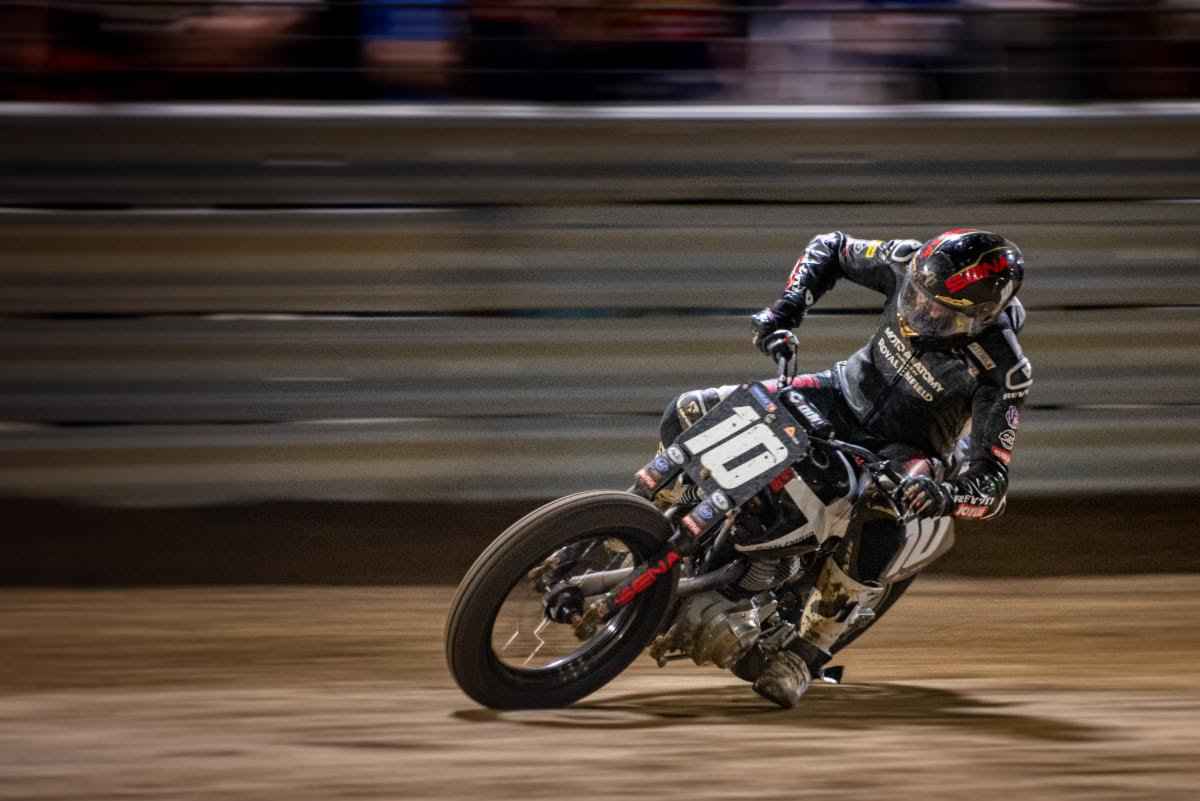 Johnny Lewis debuted an all-new Harris Performance-built chassis at the I-70 Half Mile–a major step in the Royal Enfield Twins FT evolution.

The I-70 Half-Mile also marked a first for Johnny Lewis and the Moto Anatomy X Powered by Royal Enfield Team, as they debuted an all-new Harris Performance-designed chassis in the Twins FT motorcycle. Lewis is taking on the full 2022 season in the Production Twins class of American Flat Track, where he and the team continue to make progress on the Twins FT.

“This all-new chassis is a clean-slate design, and is the culmination of two years of race testing and feedback from Johnny Lewis,” said Breeann Poland. “Together with the world championship-winning expertise of Harris Performance, this new chassis is much improved, and ready to take on a full season in American Flat Track racing.”

The I-70 Half-Mile turned into the proving grounds for the new chassis, and although the test sessions that were originally slated to take place at the Odessa, Missouri venue were abbreviated due to weather and complications with track equipment, Lewis and the Moto Anatomy X Team were able to put the new chassis to the test.

“We were able to extensively test the new chassis for the first time at I-70,” Lewis said. “Although we had very limited track time due to weather, we did what we could in that time. We were able to find some areas to improve on between now and our next race, the Red Mile, which happens to be the first Mile for Royal Enfield in AFT. We’re feeling pretty excited and confident heading into uncharted territory in Lexington, Kentucky.”

Lewis put in solid laps during the Production Twins main event, where he finished sixth in order to maintain a solid top-five position in the championship. Johnny and the team look forward to taking an important step at the following round—the first Mile race of the season—the Red Mile Doubleheader in Lexington, Kentucky taking place May 28-29.