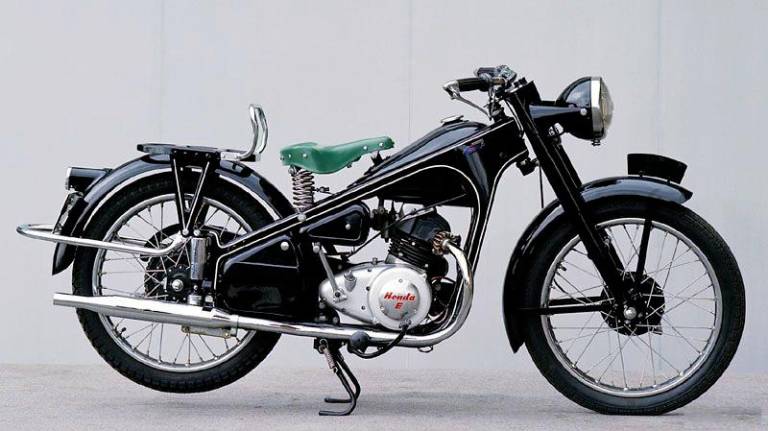 Mr Honda’s disdain for two-stroke engines fuelled the relentless pursuit of perfection for his little four-strokers.

It was March 1951 when Soichiro Honda summoned engineer Kiyoshi Kawashima from Hamamatsu.

“‘Kawashima, would you mind coming over for a moment?’ It was the beginning of a two-month stint in the capital as I worked on the design of the E-Type 4-stroke engine in a corner of the Tokyo Plant,” recalls Kawashima. “When the plans were at last ready the Old Man dashed in to see it, bringing Fujisawa, with him.” (Takeo Fujisawa was Honda Motor Co Ltd’s co-founder.)

Kawashima can remember clearly that day in May 1951. “As he showed the plans to Fujisawa, Mr. Honda gave us an enthusiastic commentary: ‘Ah, I see. You have this kind of valve and the cam goes like that. This is what I call an engine, it isn’t just a two-stroke machine that looks as though it’s been cut from a bamboo tube with holes drilled. This will sell. Honda will do well with this!’ Mr. Fujisawa didn’t have any understanding of the plans, he didn’t know anything about mechanical things at all, so he just said things like ‘Hm, yes, that’s great,’” said Kawashima, laughing.

The now-legendary test crossing of the Hakone Pass took place on July 15. In those days the Hakone Pass was considered the ultimate test for a motor vehicle. Even lorries could only get over it if they stopped for a rest every now and then. So it was certainly a challenge for a small 150cc motorcycle. Kawashima acted as both the engine designer and on that occasion, as test rider.

“Actually we’d been using the Hakone Pass as a test track for quite some time by then. I was sure we could climb it, but I was pretty nervous because the Old Man and Mr. Fujisawa were coming along as well.

“If the engine had overheated or something and conked out right in front of Mr. Fujisawa, the Old Man would have suffered a terrible loss of face. That day a typhoon was approaching but history relates that the engine was completely untroubled in the torrential rain and raced up the hill in top gear.

“I joked to myself that it was lucky there was so much rain and spray, because it meant that the air-cooling worked liked water-cooling and helped keep the temperature down. Although I say that I went up in top gear, there were only two gears, which was just as well,” he said, laughing. “Looking back on it, I think that was a good, plucky little engine.”

The story goes that the motorcycle overtook the Buick that Honda and Fujisawa were riding in. Kawashima went over first and the three men were reunited at the summit of the pass, where they hugged each other with delight.

The Dream E-Type was Honda’s first four-stroke machine. The Japanese motorcycle industry had become more competitive about a year before and bikes with four-stroke engines were produced for the first time. The market started to show preference for four-stroke rather than two-stroke bikes.

Later, Honda came to be known as “Four-Stroke Honda” although in fact it was rather slow in switching to the new type of engine. But at this time a lot of four-stroke engines were fitted with side-valves for reasons of economy and ease of manufacture, while Honda opted for the overhead valve system.

Another difference was that Honda’s bikes, both two- and four-stroke, were much more powerful than other Japanese machines with 150cc engines.

“The Old Man probably wanted to make proper four-stroke bikes from the very beginning. In those days people’s ideas about two-stroke engines were rather hazy and since they burn up lubricating oil, which isn’t meant to be burnt, the Old Man probably only tolerated them as a kind of stop-gap at a time when he had no money and inadequate facility,” said Kawashima.

“For two decades after the launch in the following year of Cub F-Type (a two-stroker), Honda made only four-stroke bikes. The E-Type was the first bike the Old Man really enjoyed making.”

The E-Type’s frame, like that of the D-Type’s, was of channel-frame construction, but because there had been so much trouble with the failure of the wet-cone clutch on the D-Type, the E-Type was fitted instead with a dry-type multiple disc clutch. The clutch control was also changed to the more conventional left-hand lever system.

Kawashima recalls: “On reflection, we realised we had made a mistake in being too unique and we decided to make our bikes more conventional. But since it’s not Honda’s way to revert to old designs, we decided that the point of difference should be the quality of the engine. These were extraordinary bikes in the best sense. They sold well and brought pleasure to both customers and dealers.”

The E-Type went on sale in October 1951. Compared to the D-Type, which had shipped 160 units per month at its peak, 500 units of the E-Type were being shipped out a month only half a year after its launch and a year later, when it was fitted with a third gear, that rose to 2,000; three years later annual production reached 32,000 units.

Now that Honda had overcome the critical problems of its early years, the company would, as Honda himself had predicted, start to expand thanks to the success of the E-Type and seize the opportunity for rapid future development. 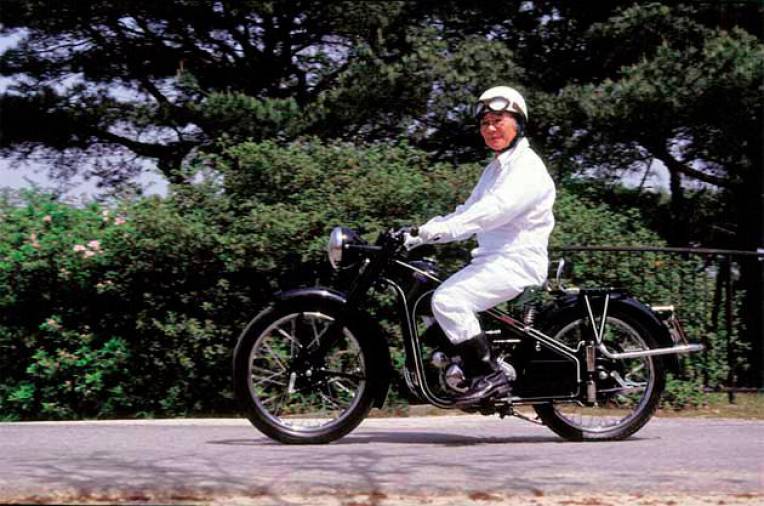 Kawashima riding a Dream E-Type at the Suzuka Circuit on April 1, 1992.