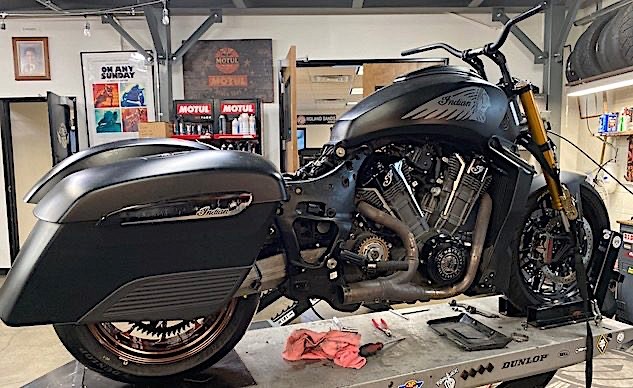 The biggest news of the week on the Harley-Davidson front is that the company is giving up on the world’s largest motorcycle markets. Milwaukee announced at the end of the week it is leaving India, sending shockwaves in the Harley-loving community there. But there might be an even more interesting piece of news in the oven, ready to be served at the end of October.

It is then when the MotoAmerica Superbike Speedfest takes place in Monterey (October 23-25). As part of the event, a little show called King of the Baggers will take place, pitting a pack of 12 Harleys against a single, S&S and Roland Sands-prepared Indian Challenger (initially the word was that there would be 13 Harleys fielded).

The already incredible Indian two-wheeler got specific tweaks for the task of taking on the Harleys, including Roland Sands wheels shod in Dunlop super sport tires, hydraulically-adjustable FOX X rear shock, and an inverted front suspension.

We’ve already known the bike was in the works, and we’ve seen it testing a couple of weeks back. And now another piece of the puzzle is revealed: the name of the rider.

Frankie Garcia, the man who back in 2006, when he was just 15, became the youngest athlete to compete in an X-Games motorcycle event, and currently member of the Indian Motorcycle-RSD Super Hooligan race team, will be the one trying to keep in check the bike’s 122 horsepower against the small army of Harleys.

“It’s a real honor to have the opportunity to not only participate in the inaugural King of the Baggers race, but to represent RSD on one of only two Indian Challengers in the field,” said Garcia in a statement.

“I’ve had the opportunity to spend some time on a stock Challenger, and believe me, this bike wants to go fast and handles like a bike half its size. It’s the perfect platform for something as radical as knee-dragging baggers at Laguna Seca.”