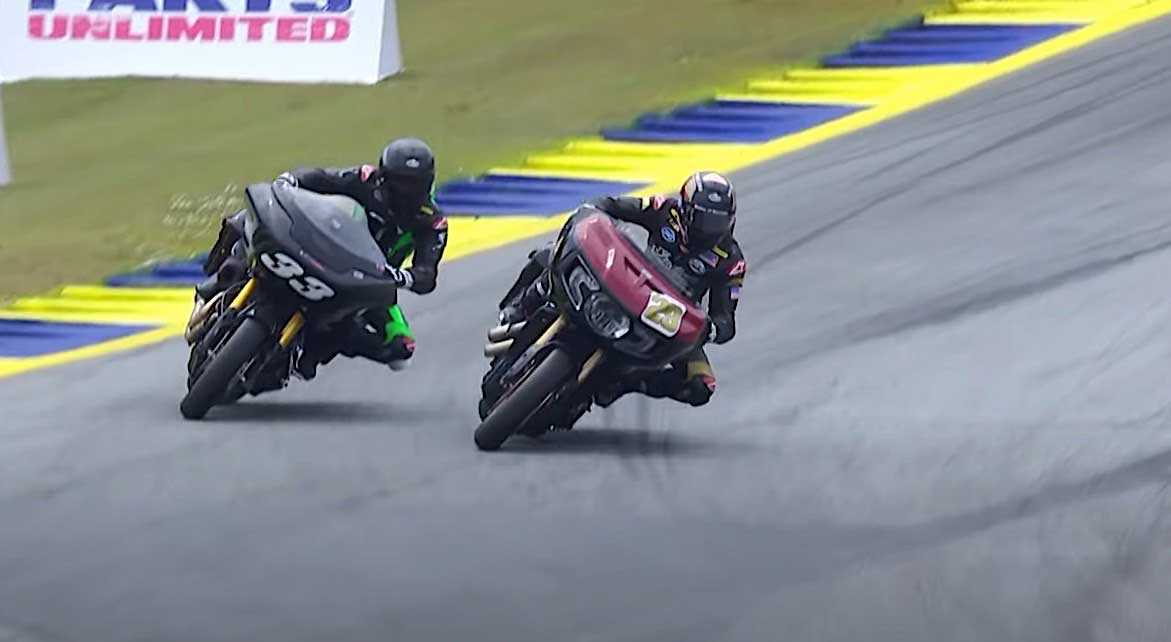 SEE VIDEO BELOW – It’s been an exciting weekend for motorcycle enthusiasts as the Michelin Raceway Road Atlanta hosted a number of MotoAmerica events. For us, by far the most spectacular was the first race of what is now the King of the Baggers series.

Born last year as a single run at the WeatherTech Raceway Laguna Seca, King of the Baggers morphed for 2021 into a small series of three races, and attracted significantly more involvement from both Indian and Harley-Davidson. The former went on the starting grid with no fewer than three factory-backed teams, while the latter enlisted its own factory team and backed four other Harley-Davidson riders.

Back in 2020, we had 11 Harleys going up against just two Indians. The outnumbered bike maker managed to end the race in first and third podium positions, with riders Tyler O’Hara and Frankie Garcia, respectively. Sandwiched between them was Harley rider Hayden Gillim.

This year, O’Hara and Garcia repeated their performance from 2020, and ended the race in the exact same positions. This time, however, Gillim completed the race fourth, and his spot between the two Indian riders was taken by Harley’s own Kyle Wyman. The rest of the Harley pack, save for one that didn’t finish the race, came in after them.

Unlike last year however, Harley riders did seem to put on more of a fight. For most of the race, the lead switched from O’Hara to Wyman repeatedly in epic fights, but in the end the Indian rider managed to cross the finish line first, just under a second ahead of the runner-up. You can watch the video attached below for highlights from the race.

There are two more events left in this inaugural season of King of the Baggers, with the races scheduled in June at Road America, and, as a return to where it all started, one month after that at Laguna Seca.