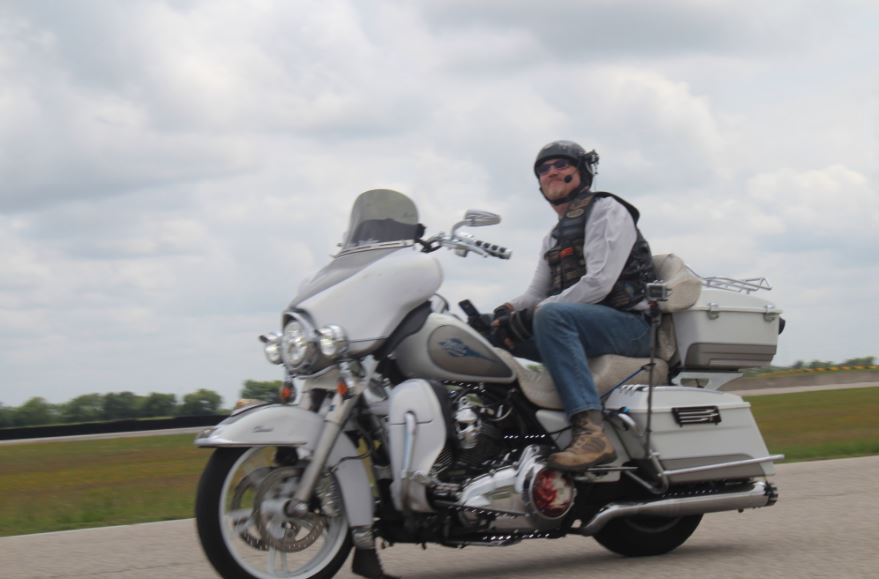 Sometimes, the biggest ideas come about in the most unexpected ways. Such an example is Shelton Foster and Mike Brick’s decision to set a new world record for the longest motorcycle ride with no hands.

In March 2015, Marcello Sarandrea set the record in Rome, Italy, riding a Yamaha Tricker 250 for 137.94 miles without touching the handlebars. At the time, Foster and Brick didn’t even know such a record existed, but they were already riding hands-free for fun.

Shelton “Big Red Machine” and Foster Mike “Brick” Wall from Dry Prong, Louisiana, are the current holders of that record title, beating Sarandrea’s feat on May 9, 2017, according to the Guinness Book of World Records. They were able to ride in sync for 185 miles, 857 feet and 5 inches without touching the handlebars, at the MSR Speedway in Angleton, Texas.

The new record was set on a pair of Harley-Davidson Electra Glides with no modifications, and verified by Guinness through extensive documentation submitted by the two riders and witness accounts, as is standard procedure. The history behind that record title is just as interesting as the accomplishment itself.

Shelton is President and Wall is VP of the Red River Chapter of the Reguladores Law Enforcement Motorcycle Club, an MC whose name needs no further explanation. They both work as correctional officers and are war veterans, and have chosen to dedicate their Harley passion and their work to raising awareness and money to an array of charitable causes, most of which focus on vets dealing with PTSD and domestic violence.

The idea for the record, which they dubbed the “Jesus take the wheel” record, came about after Wall was pulled over by a cop for riding without hands. He was eventually let go with a warning after promising to never do it again. Back home, he looked into Louisiana law to see whether there was an explicit mention on how hands-free riding was illegal, and found none.

What he did find was the previous record set by Sarandrea. Foster came up with the “Jesus take the wheel” name after a random chat in traffic with a car driver.

“I was riding in the back seat of my bike [with no hands], pulling Eva [his service dog, which was riding in a trailer],” Foster explained in an interview with Town Talk. “A gentleman pulled up next to me and rolled his window down and hollered, ‘Hey, who’s driving the bike?’ And I pointed up to the sky and said, ‘Jesus is.’ That inspired the name of the record.”

Once the decision was made, they started looking into what was needed to have the record recognized. They say their motivation for it was doing something they would be remembered by but, most importantly, knowing they would reach a bigger platform from which they could help their favorite causes. They dedicated their feat to DART (Domestic Abuse Resistance Team), Heels for Combat Boots, and Brothers and Sisters in Arms.

Most of the training was done on the open road, as befits a Hog. The first attempt was foiled by bad weather, but the second was a success. With donated SENA cameras mounted on the helmets and bikes, and help from local sponsors (including Renegade Harley-Davidson and MSR Houston), the two rode in tandem at the MSR Speedway outside Houston, completing 228 laps without once touching the handlebars at a constant speed above 30mph, which is the limit for engaging cruise control.

To further prepare, the two went on a lighter diet in the days leading up to the world record attempt, in anticipation of riding non-stop for some five hours. Getting hunger cramps while riding hands-free would have been counterproductive, obviously.

They also packed plenty of water in backpacks and other easily accessible places. Eva, Foster’s service dog, which has been trained by a Brothers and Sisters in Arms to detect when he’s about to have an anxiety attack, was at the track but did not accompany her human on the Harley.

Both Foster and Wall claim to be experts in riding without hands, and they insist it’s actually safer than you might think, as long as you’re taking extra cautions. These include not driving in heavy traffic and paying very close attention to the road, as the smallest pebble can throw you off.

“It takes a lot of hyper-vigilance” Wall added. “You’re being more responsive to everything around you. You’re paying a lot more attention.”

As of the time of writing, the record set by Foster and Houston stands. Footage shot at the scene is available here.